We're at the halfway point of the conference schedule, and Michigan and Indiana continue to keep their distance ahead of the rest of the league. Both offenses are the class of the Big Ten, although Minnesota isn't far behind (thanks to a 1.4 PPP explosion vs. Nebraska). Ohio State and Wisconsin keep winning with defense, but those numbers will be tested this weekend as Michigan travels to Madison and Indiana goes to Columbus. 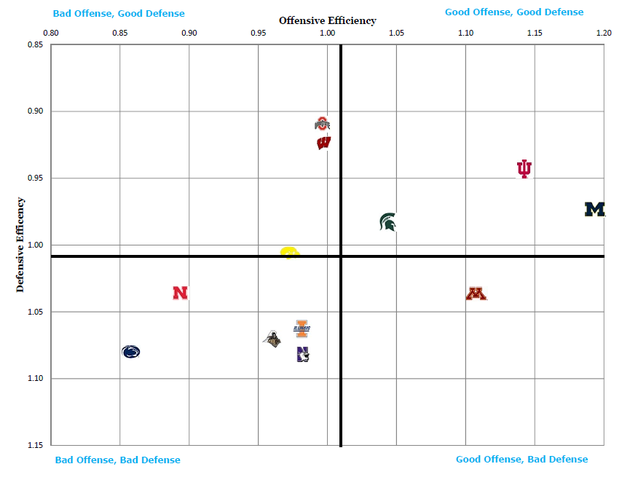 Only two road wins happened this past week in conference play - Indiana over Purdue and Ohio State at Nebraska - neither of which were out of the ordinary. While the Hoosiers have returned to the top of the league standings, they have arguably the hardest schedule remaining, including road-trips to Ohio State, Minnesota, Michigan State, and Michigan.

THIS WEEK: at Illinois (Thursday), at Ohio State (Sunday)

The Hoosiers won the showdown versus Michigan in a raucous Assembly Hall. They jumped out to a big lead early and were able to hold off the Wolverines down the stretch. While the preseason #1 returned to the top, they have two important games on the road this week if they want to maintain their slim lead in the standings

THIS WEEK: vs Ohio State (Tuesday), at Wisconsin (Saturday)

While Michigan lost in Assembly Hall, this conference race is far from over. However, the Wolverines are in the midst of a brutal 4-game stretch and have big games this week. Look for Trey Burke to lead his young team for revenge against his hometown Buckeyes on Tuesday.

THIS WEEK: at Michigan (Tuesday), vs Indiana (Sunday)

The Buckeyes have quietly put themselves firmly in the race through the first half of the season. This week will tell us if OSU is for real with games against both conference front-runners. Thad Matta's club was able to thwart Michigan's potent attack in the first matchup. Aaron Craft harrassed Trey Burke and subsequently slowed the Woverines' offense. If he can do it again in Ann Arbor, no one will be able to count out the Buckeyes going forward.

THIS WEEK: vs Minnesota (Wednesday), at Purdue (Sunday)

The Spartans won their only matchup this week, but it wasn't easy. Obviously, Izzo's team is still in the thick of things, but their tempo-free numbers haven't been particularly impressive (6th in EM in the Big Ten). They must play better if they want to take revenge on the Gophers this week at the Breslin Center.

THIS WEEK: vs Iowa (Wednesday), vs Michigan (Saturday)

The Badgers weren't able to breakthrough in Columbus but still earned a good road win in Champagne. They return to the friendly confines of the Kohl Center this week with a chance to make up some ground in the standings.

THIS WEEK: at Michigan State (Wednesday), vs Illinois (Sunday)

Nothing like a few easier home games to erase their prior 4-game losing streak. The Gophers found their stride against Nebraska and found a way to win their dogfight with Iowa. They have a nice opportunity at East Lansing to add a signature road win to their resumé.

THIS WEEK: at Iowa (Saturday)

Northwestern wasn't competitive in Ann Arbor, but they took it to visiting Purdue in Welsh-Ryan Arena. Reggie Hearn scored 22 points on just 9 shots against the Boilermakers. The Wildcats get the week off before traveling to Iowa City.

THIS WEEK: at Wisconsin (Wednesday), vs Northwestern (Saturday)

The Hawkeyes' stopped their bleeding with a win over Penn State but weren't able to notch a key road win at Minnesota. Those are the kinds of games they need to win if they want to get serious about the NCAAs. They have another shot in Madison on Wednesday.

THIS WEEK: at Penn State (Tuesday), vs Michigan State (Saturday)

Hard to imagine Matt Painter having a worse week than the one his Purdue team just suffered. First came the worst loss in Mackey Arena history as the Hoosiers walloped their in-state rivals, 97-60. They followed that up with a listless 60-75 loss in Evanston to Northwestern. They gave up an average of 1.38 PPP in two games this week, very atypical for a Painter squad.

THIS WEEK: vs Indiana (Thursday), at Minnesota (Sunday)

Time is running out on the Illini, who weren't able to get over the hump this week in their two close contests. Hard to believe this team won the Maui Invitational and now is fighting for their tournament lives. Brandon Paul is shooting just 27.3% from 3 in conference play, but the Illini's defense has been their bigger issue. They must pull at least one upset this week to stay alive.

THIS WEEK: vs Penn State (Saturday)

The Cornhuskers actually had their best offensive performance in league play at the Barn. Unfortunately, the Gophers could not be stopped as they put on a display, scoring 84 points in just 60 possessions (1.4 PPP). They get the week off before facing Penn State this weekend.

THIS WEEK: vs Purdue (Tuesday), at Nebraska (Sunday)

No better week for Penn State to get a conference win than this one. The slumping Boilers come to town Tuesday and they get another shot at Nebraska, who has an offense just as bad as PSU's.