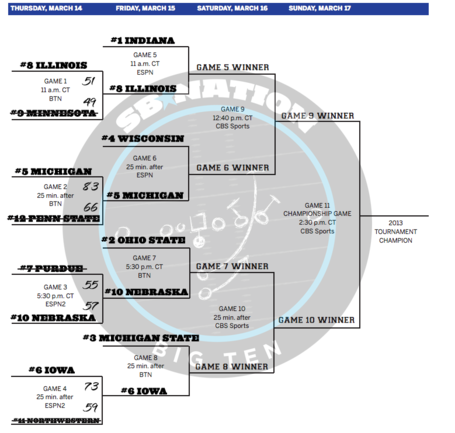 As The Champaign Room writes, Indiana is seeking revenge after the Illini pulled off the upset in their only meeting this season. Brandon Paul hit the tournament's first game winner against Minnesota on Thursday, but Illinois didn't exactly inspire after letting the Gophers back into a game they had total control over. Prediction: The Hoosiers will want this one bad and there won't be a home crowd to spur John Groce's team on. Indiana rolls, 78-61.

Another battle of teams that only met once in the regular season, though it was a doozy. Wisconsin won their sole matchup in overtime, 65-62 in Madison. The Ben Brust game, if you will. Hopefully this game can live up to the previous meeting, but Bucky has been slumping lately. It took a Traevon Jackson buzzer beater to avoid the upset at Penn State in their regular season finale; meanwhile Michigan got their vengeance against the Nittany Lions in yesterday's route. Prediction: The only thing this one is missing is Gus Johnson on the call (don't worry, you'll get him in the second session on BTN). Michigan continues the revenge trend, 72-69.

Nebraska pulled off the minor upset against Purdue, a team some thought could make some serious noise after their hot finish to the season. Instead of A.J. Hammons, Thad Matta will have to deal with the tandem of Andre Almeida and Brandon Ubel down low. The Cornhuskers, however, will have to find a way to deal with Aaron Craft and Shannon Scott, perhaps the league's best defensive backcourt. Lenzelle Smith Jr had a field day in these teams' two matchups this year, shooting 8-11 from beyond the arc. Prediction: One win is all Nebrasketball's gonna get. Matta knows how to navigate tournaments, and his team won't play down. The Buckeyes roll, 80-57.

Iowa was able to breeze past Northwestern despite shooting just 37% on Thursday, setting up a matchup with the team that has knocked them out in the last two conference tournaments. The Hawkeyes probably need a win to get themselves firmly on the bubble, as they're probably out for good with a loss. The Spartans won the lone matchup in Iowa City back in January, 62-59. Prediction: Tom Izzo's clubs always seem to peak in March, so betting on the Hawkeyes today is a dangerous proposition. Since there's no money involved, I'll do just that--Iowa pulls off the shocker, 65-63 (Reminder: Law of Gus is in effect).