A lack of upsets on Friday makes for some fantastic matchups on Saturday. 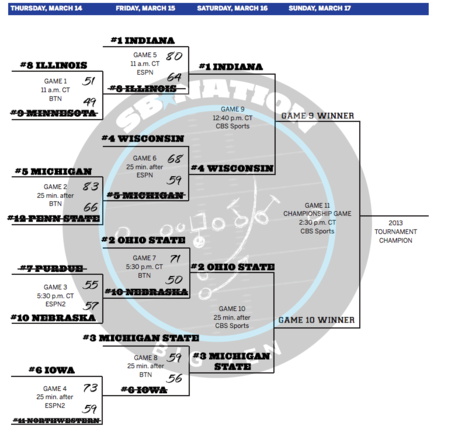 No Cinderella story in this edition of the Big Ten tournament--we've got 1 vs. 4 and 2 vs. 3 for the second straight year. First up (links to team previews):

This is yet another revenge game in the Big Ten tourney, and this one goes much deeper than this season. Indiana hasn't beaten Wisconsin in their last 11 meetings, including January's contest at Assembly Hall. The Badgers quashed Michigan's semifinal hopes with 51 second half points on Friday, at one point averaging 1.83 (!) points per possession. Indiana made swift work of Illinois behind 24 points from Cody Zeller, setting up a nice matchup for the preseason national POY against Jared Berggren, who struggled against Zeller (5 pts, 4 reb) in their only meeting this year. The Hoosiers will need to defend the three and play at their preferred fast tempo to advance to the final, and I think they'll do just that. Prediction: Indiana 64, Wisconsin 57

The Spartans and Buckeyes split their season series like normal Big Ten powerhouses should. Sparty labored a bit more to win their home game, 59-56, and they labored a bit more yesterday against a desperate Iowa, who will probably miss out on the Big Dance. Ohio State had a decidedly easier quarterfinal, whipping Nebrasketball by 21. Tom Izzo's gameplan in the first meeting was to limit Deshaun Thomas' supporting cast, and it worked wonderfully--Thomas had 28 on 10-20 shooting, but no other Buckeye could muster more than six points. In the reverse fixture, Aaron Craft went off for 21 points in a Buckeye win, and Craft vs. Keith Appling (who did THIS last night) should be one hell of a battle. Prediction: Michigan St. 70, Ohio St. 68

This happened two years ago. It seems like a decade ago: