BSD previews the best conference championship around - Big Ten Wrestling - before the pre-seeds come out.

Oh sure, we could wait for the Big Ten to announce pre-seeds, or for the actual brackets to come out. That would certainly improve our prognostications. But waiting is too difficult. And besides, I'm not averse to making a complete ass out of myself with horrendous predictions.

We roll through each weight class in this post. Each weight class sports its own roster of wrestlers, their projected seed, their final Coaches Poll rank, their season record and record in Big Ten duals. We stop the prognosticating within the brackets at the quarterfinals, as an anti-jinx against last year's Big Ten Championship quarterfinals. If the brackets/charts prove too difficult to read, you can: 1) get reading glasses; 2) hook your pc into your big screen tv; 3) try sprinkling Extenze on your monitor; and/or 4) click the bracket to embiggen. 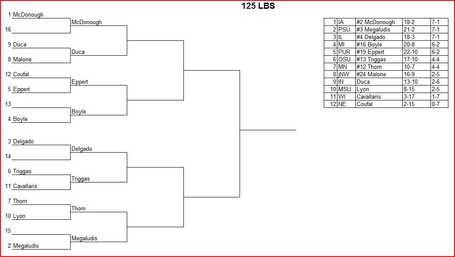 Last Year: McDonough beat Minnesota's Zach Sanders for the 10,000th time, and everyone saw it coming. Our guy Nico finished 5th, dropping a semi-final to Sanders and getting upset by jNW Levi Mele in the wrestlebacks.

This Year: McDonough beat Megaludis beat Delgado beat McDonough. Here at BSD, we're figuring McD to get the #1 seed, which will put Nico and Delgado into the bottom half of the bracket. To make matters worse, we gave Nico the worst possible seeding outcome - facing #12 Thorn in the quarters, which could be another slobber-knocker of a bout. 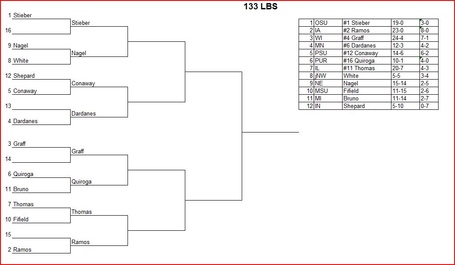 This Year: You get 4 of the national Top 10, but Stieber-Ramos could be the bout of the century. If this final match-up happens, it's worth the entire weekend's ticket price by itself. On the PSU side, Conaway has really impressed this season, seeming to improve each month as the year has worn on. But he's likely to have a tough quarterfinal bout no matter where he gets seeded - you could make arguments for anywhere from #3 to #6. In the bracket above we put him at #5, likely facing #4 Dardanes (a returning All-American) for the first time. 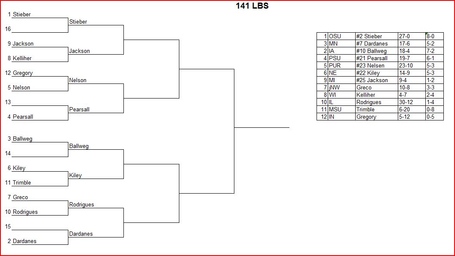 Last Year: Kellen Russell and Montell Marion were in the field, and this weight still only took the Top 5. Pearsall finished seventh and missed the NCAAs.

This Year: Stieber's on a little higher level than everyone else in this bracket. Dardanes and Ballweg are one notch below. And then you get four more ranked guys that are relatively equal. That's seven guys for six spots. Pearsall's proven he's at the top of that 3rd group during the season. Let's hope it plays out the same way this weekend. 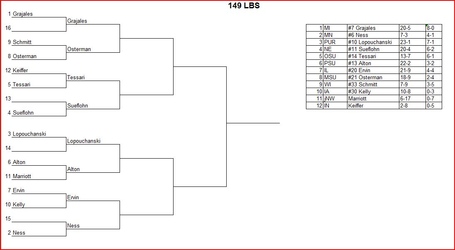 Last Year: Frank Molinaro killed the field, not allowing a single point to be scored on him. Dylan Ness learned to hate a bow-and-arrow.

This Year: Ten of the 12 are ranked by the Coaches. Call me stupid, but I think Ness is a notch above the guys in this field, including likely #1 seed Grajales. But seeds 3 thru 6 can all beat each other. Making the quarterfinals should approach the NCAA blood-round in terms of competitiveness. Same with the semi-finals, which should all be great matches. Our guy Alton can beat all of them, and lose to some of them as well. This is a real toss-up weight. 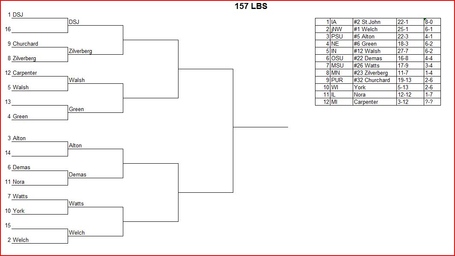 Last Year: DSJ beat Welch on one leg off of - wait for it - counter shots. Who would guess that one?

This Year: It's the same crowd all over again - they're just ranked higher nationally this time around, because the top 4 all made All-American last season. Alton has beaten Welch the last two times he's faced him, has never lost to Green, and was closer to beating DSJ than ever before. But none of those wins (or the losses to DSJ) have been overwhelming. All four of these guys wrestle each other to 1 or 2 point decisions. So this weight could give us a few fireworks as well. 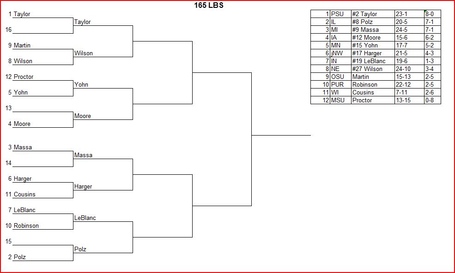 Last Year: David Taylor scored bonus on everyone, including Mike Evans in the final.

This Year: David Taylor scores bonus on everyone, including Conrad Polz in the final. 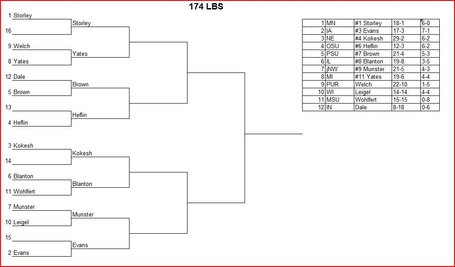 This Year: The Top 8 seeds are ranked in the Top 11 nationally. Wow. Storley's beaten all of them, winning un-conventionally in a lot of those matches. He beat Brown with a defensive pin; Evans with a key reversal; Blanton with an official reviewed and reversed takedown. In other words, the top 5 here are all very, very close. 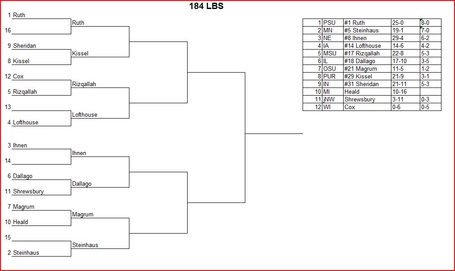 This Year: Ed Ruth. Thanks for stopping by, everyone else. 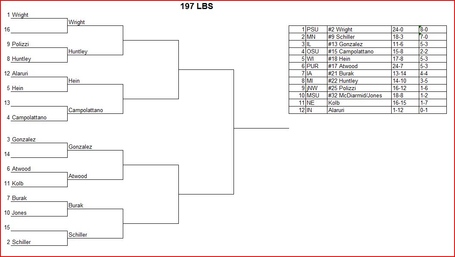 Last Year: Yawn vs. Powless! It's faaaannntastic! IL-LOL-nois' Gonzalez was your surprise champ.

This Year: Which youth wrestling move will Quentin use to pin a nationally ranked guy this time? He's spladled Wisconsin's Hein. He figure-4'ed Matt Wilps' head. I'm still waiting to see that Peterson. 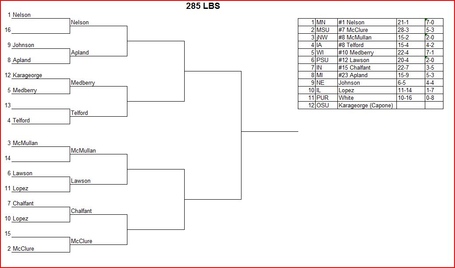 Last Year: Tony Nelson went on a run that continued all the way through the final wrestling match of the season. Ten Big Ten heavies got tickets to Nationals, so it was a loaded field.

This Year: Ohio State's Capone doesn't look likely to wrestle. He's been out of commission since his injury default to PSU's Jimmy Lawson. Nelson is a cut above, but seeds 2 thru 7 or 8 are all very close to each other. I'll go way out on a limb and predict a lot of tight scores from the heavyweights.

Penn State qualifies all 10 for NCAAs for the first time since I can't remember when. These predictions give us six Penn State finalists and four champions. That should be enough to bring home a third straight Big Ten title.

We'll revisit the Big Ten Championships with another post after the pre-seeds are announced. In the meantime, we're one day closer to Saturday.