The Hoosiers maintain their dominance in efficiency margin, despite the upset loss at Minnesota. They've been the best team per-possession throughout the Big Ten season. That's why they're just one win away from an outright Big Ten championship. Also of note, only 4 teams in the league have negative efficiency margins. Not sure if that's an indictment of how bad the bottom of the league is compared to the rest, or if the top is just that good. Probably a bit of both. 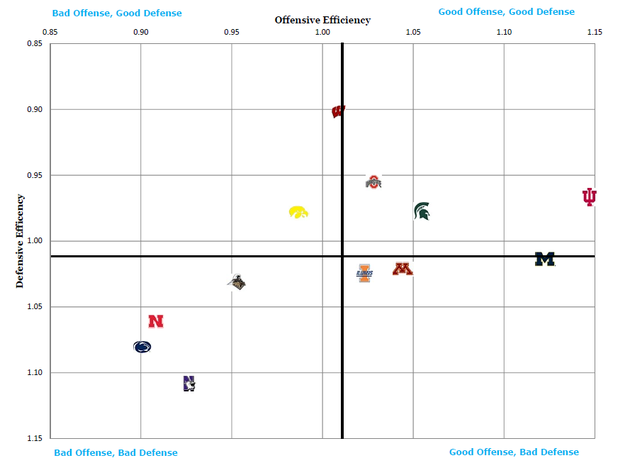 Michigan State couldn't steal what would've been a huge road win in Ann Arbor. Their loss along with Purdue's complete shocker of Wisconsin has given Indiana a comfortable lead heading into the last two games of the regular season. The Boilermakers earned the unlikeliest road win by going into the Kohl Center on Senior Day and winning handily. It was a devastating loss for Wisconsin and their conference championship aspirations.

THIS WEEK: vs Ohio State (Tuesday), at Michigan (Sunday)

There's not much debate anymore - Indiana is the Big Ten's best team. They still have to earn it outright with two tough games remaining, but the stats, standings, and eyeball analysis favor the Hoosiers. They have the most talent, experience, and balance than any other team in the Big Ten. They had enormous expectations heading into the season, and barring a catastrophic collapse this week, they'll meet them with a conference championship.

THIS WEEK: at Indiana (Tuesday), vs Illinois (Sunday)

Everybody else lost, so why not put the Buckeyes 2nd? They continue to fly under the radar, but with all the parity, even Ohio State can grab a share of the Big Ten title with two wins this week (and an IU loss to UM). Although going into Assembly Hall on senior night against the Hoosiers is not what I'd call a probable win

THIS WEEK: at Purdue (Wednesday), vs Indiana (Sunday)

The Wolverines had steadily been declining since the calendar turned to February, and it culminated with an astonishing loss to 0-14 Penn State. But Trey Burke put his team on his back and defeated their in-state rivals in an anticipated rematch that could help get Michigan back on track. They'll look to keep that momentum rolling this week against Purdue and Indiana.

THIS WEEK: vs Wisconsin (Thursday), vs Northwestern (Sunday)

The Spartans almost pulled it off in Ann Arbor, but their loss gave Indiana at least a clinch of the conference title. Izzo's team still has an outside shot of sharing the regular season crown with the Hoosiers if they get some help from Michigan and win their last two home games.

THIS WEEK: at Michigan State (Thursday), at Penn State (Sunday)

I still don't believe that Purdue score from Sunday. Even with Ryan Evans playing after suffering a knee sprain in practice, the Boilers ruined senior day for Evans, Jared Berggren, and Mike Bruesewitz. The Badgers could have had an outside shot at the conference championship, but now have two road-trips remaining to finish the year.

THIS WEEK: at Iowa (Tuesday), at Ohio State (Sunday)

Illinois survived another scare at home over the weekend, avoiding the horrible loss and maintaining good standing with the NCAA tournament committee. With two wins over likely #1 seeds in Indiana and Gonzaga, it's hard to see this team being left out. But they do have two road trips this weekend and if they're upset in round 1 of the Big Ten tourney, who knows what the Illini's fate will be.

THIS WEEK: at Nebraska (Wednesday), at Purdue (Saturday)

The Gophers revived their season in the Barn this week, taking down #1 Indiana then trouncing Penn State. Minnesota also is likely to go dancing, but these two road games offer the chance for Tubby's team to regain their December/January form again before the postseason rolls around.

THIS WEEK: vs Illinois (Tuesday), vs Nebraska (Saturday)

Iowa is a long-shot for the NCAA Tournament after their horrible loss to Nebraska, but stranger things have happened. They weren't able to pull off the upset in Bloomington, so they'll likely need to win at least their next 4-in-a-row to have a shot. Not impossible, but they'll need a lot of luck.

THIS WEEK: vs Michigan (Wednesday), vs Minnesota (Saturday)

No one really knows how that Wisconsin game happened. But it did and suddenly this team has won 7 conference games, even though there are still some fans calling for the termination of Matt Painter. They could be a tough out for either Michigan or Minnesota this week in Mackey Arena.

THIS WEEK: vs Minnesota (Wednesday), at Iowa (Saturday)

Nebraska couldn't pull it off against Illinois despite Dylan Talley's and Ray Gallegos' best efforts. Even if they lose the rest of their games, it's hard to say this season hasn't been a success under Tim Miles in his first year in Lincoln.

THIS WEEK: at Northwestern (Thursday), vs Wisconsin (Sunday)

They got off the snide with a huge win over Michigan, but looked completely out of gas just three days later against Minnesota. Chambers' team has the will to fight but physical fatigue seems to be catching up to them. They have a good opportunity this Thursday to break their 2-year long road losing streak in Big Ten play against Northwestern.

THIS WEEK: vs Penn State (Thursday), at Michigan State (Sunday)

Only one loss for Northwestern this week, thanks to the schedule. They played Ohio State down to the wire, but that's been common against these foes in recent years. Carmody's team has been dreadful after the injury to Swopshire.