Penn State's Blue-White Spring Scrimmage affords a chance to see some youngsters. BSD Film Room takes a quick look at two of them.

Ah - spring football. The sun comes out, then goes away, replaced by rain. The rain turns into snow flurries. Then the sun comes back out for a few minutes. Then more rain. And, finally, we settle on the Happy Valley reliable: overcast.

But unlike the U.S. ambassador to North Korea, we're not wasting any more time talking about weather. We're jumping right into some film cut-ups, focusing on two young players from the Blue-White game: Akeel "Big Maple" Lynch, and Derek Dowrey.

What's that? You don't know or remember Derek Dowrey? Well, let me refresh your memory. This will be fun for old timers, and enlightening for interwebs newcomers.

June 2011: Derek announced he'd be attending Penn State as a 2012 signee, along with Austin Johnson. Black Shoe Diaries was there to cover the announcement, and as you can tell from the comments, the lines were immediately drawn: you were either pissed at the lack of STARZ, or you believed in LJ Sr. At least, that was the early line in the sand. Side note: there was also consternation from the commentariat that Jenn Brown, Sophomore, Economics, was now likely to be Jenn Brown, Senior, Economics, or - gasp - Jenn Brown, alumae.

June 2011, plus 5 minutes: the Penn State interwebs explode with indignation and confusion. Where were all the starz?! Y U NO 'CROOT 5-STARZ, JoePa?

June 28th, 2011: BSD's favorite son Adam Collyer attempts to quell the riot single-handedly, with an 'all's well' post. He points out: a) Dowrey (and Johnson) likely lack starz only for lack of exposure, coming from small schools; b) that the June 2011 offer - as opposed to a January 2012, last minute offer - reinforces the notion that Dowrey impressed the staff at the 'rising seniors' day, in person; and c) Larry freaking Johnson, folks. Trust him. The message appeared to work, as the comment thread devolved into two serious tangents: 1) the Nestea girls on the side bar ads; and 2) a discussion of the dark year(s). Also found in the comments: a WorldBFat MS Paint gif. Dude was pulling down green way back in 2011, with only stone-age tools at his disposal.

June 29th, 2011, 8am Eastern: Jeff Junstrom, then of Linebacker-U, pens a rebuttal to AC's post. He argues that low-star / no-star dudes like Dowrey and Johnson would still be available in January 2012 - so why sign them in June 2011? Furthermore, the 'trust LJ Sr' theme is only correct because LJ Sr gets dudes with starz (i.e., LJ's good because he gets good talent, not because he makes chicken salad out of chicken sh!t). Sometimes lack of trust in the staff is warranted. See: Paterno, Jay; and Playcalling, Offense.

June 29th, 2011, 3pm Eastern: another bold move is struck in the debate, as BSD Founder Mike strikes down upon Junny with great vengeance and furious anger those (like LBU, Slow States, and the twittering hoard) who would attempt to poison and destroy His brothers (actually, he (from the comments) just wants to 'defend the honor of the blog'). It's a great post, but, in my opinion, gets surpassed by the comment section. Which - if we're being honest writers, here - happens all the time. No shame in that.

Whew - Epic. Blog. War. In hindsight, it was all a moo point. Superstar Tommy Shutt, a Junny wish lister, verbally committed later in the summer (after his Michigan and Notre Dame offers disappeared because they signed other guys first) - and then flipped to Urbz' Buckeyes in the scandal wake. What was not wasted? The tangents.

Dowrey (and Johnson) both stuck with Penn State through all the crap and garbage, and faxed in the signatures to new coach Bill O'Brien in February 2012. That's still incredible to me. Then, shortly after they arrived on campus in July 2012, they watched the sanctimonious prick Emmert prattle on while dishing out sanctions like so much stale soup. And, still, they stayed with Penn State. All of which should make you fall in love with the dudes.

But wait - there's more reason to fall in love. Both, despite their youth, look pretty freaking stout at the point of attack, as they showed in the Blue-White game - their first 'game' action since high school.

It's 1st & 10 in the shot below. The first team O-line squares up against the twos on defense. The (seemingly) little guy playing a 1-technique nose tackle is #53 Derek Dowrey. He's about to get combo-blocked by 4' 8" center Ty Howle (he's not really 4' 8"), and my favorite left guard, Miles Dieffenbach. After Dowrey's secured, Dieff will move to the second level and take out MLB Gary Wooten (or, as you may know him after Saturday, the only guy on the team with dreads). The two orange squared fellows are fullback Pat Zerbe, and LB Adam Cole. They're about to get really close to each other, in an old school, Joe Paterno special: ISO BOB lead. 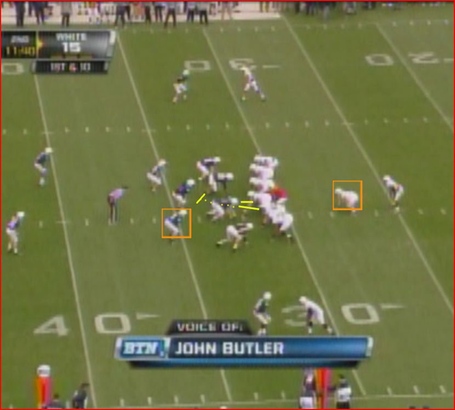 Fast forwarding a few frames, we see one of the things that makes Dowrey (potentially) special - quickness. Yes, he's a nose, so he sees the ball snapped. But that fact notwithstanding, Dowrey's quick. He and Howle have already begun their dance of death, while, by contrast, the guy with the yellow X - right tackle Gress - is still in his 3-point stance (not so good). 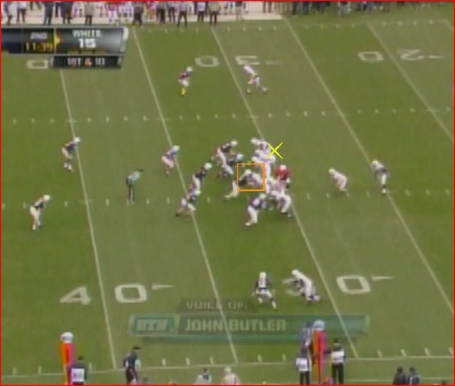 In the next sequence, we see the other thing that makes Dowrey (potentially) special - Dowrey strong like bull. He's listed in your program at 6' 3", 309 lbs. Seeing Dowrey next to Dieffenbach, though...they can't both be 6' 3", and they can't both be 309 lbs. If you believe Dieffenbach's version of 6'3", 309lbs, then you'd guesstimate Dowrey at 6' 1", 280 - 285 lbs. That's alright, though, because, as stated above, Dowrey strong like bull. And quite a few nose tackles have had outstanding, All-American careers with those measurables. Guys like Michigan's Mike Martin and Glen Steele come to mind. And if you hate Michigan like I do, then maybe you don't like those examples so much. So how about Lou Benfatti, or Matt Millen instead? Ollie Ogbu wasn't the biggest guy either, for that matter. Jordan Hill was 'only' 6'1", and a shade under 300 as a senior. Besides, what do you think Joe would have to say about being 300 lbs?

While we're still looking at the frame below, let's point out the two things happening on the yellow X's. The top X points out why being slow off the ball doesn't work. Walk-on defensive tackle #88, Tyrone Smith, was supposed to be cut off by Gress. He wasn't, and Smith'll end up making the tackle seven yards down the field. The bottom X points out DE Anthony Zettel, who is setting the edge like a freaking hoss, against massive left tackle Donovan Smith. I like Zettel, a lot. You should too. 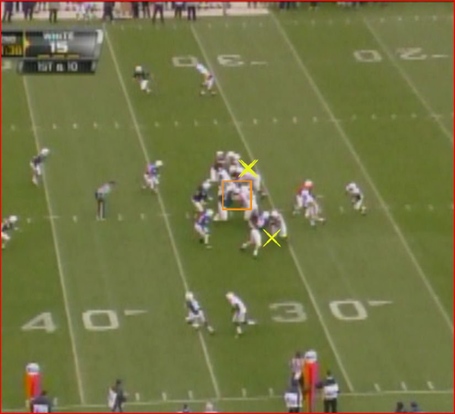 Guess what's next? If you guessed that Dowrey gets swallowed in the frame by 600 lbs of angry men, then you are correct. But Dowrey is doing a heck of a (thankless) job. He's felt the combo, gotten low, and is fighting for every inch. He's actually been enough of a pain in the ass that Dieffenbach hasn't been able to move on to MLB Wooten yet, who's (still) unencumbered and free to guess the wrong hole (and he does).

Oh - and the yellow line? That's the Back-On-Backer (BOB) nuclear blast that's coming. Ron Vanderlinden will ask LB Cole to take another few steps forward and shrink the size of the hole next time, and judging by Vanderlinden's last twenty linebackers - Cole will learn it (and Wooten will fill the right hole next time, too). 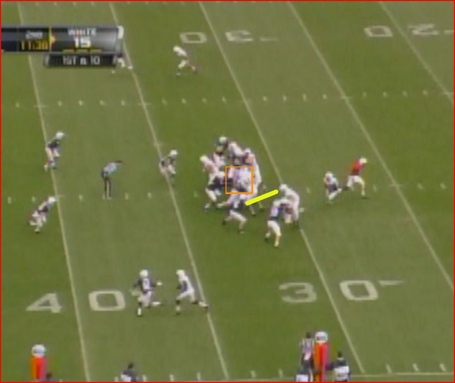 How's it end? Well, not so good for the defense. From left to right with the orange boxes: 1) John Urschel is good, getting to the second level and swallowing the backside linebacker; 2) Dieffenbach's come off of Dowrey, and because Wooten hesitated in the backside hole, Dieff still has time to stuff Wooten playside; and 3) Dowrey, the double-team victim, started this play at the 31.5 yard line, and he's doing his best to end it at the 31 or better. He does, too, but as he's reaching for RB Lynch, C Howle rolls him and they both go flying. Pretty fun.

The hole looks closed in the shot below, but it isn't. FB Zerbe roots out LB Cole, Dieffenbach makes LB Wooten missing-in-action, and RB Lynch 'gets skinny' through there and bursts for seven before backside DT Smith, who's escaping the trash in the middle, makes first contact, with an assist from the safety. 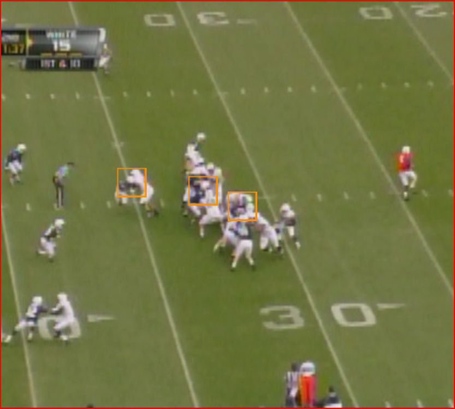 So - bad play for the defense, but pretty stout job by Dowrey.

And pretty mature play by Lynch, too. Young running backs tend to bounce everything wide, because they've been out running everyone since Pee Wee. But Lynch stayed patient and waited for his blocks before hitting the designed hole. Very nice work, Big Maple.

Akeel showed another positive trait of very good backs in this spring game: vision. In the shot below, Lynch is the single back. BO'B calls another boring two tight end, balanced formation, with a zone run to the right. In case you're wondering, Dowrey's the 1-technique nose tackle, and this is still the ones on the o-line. 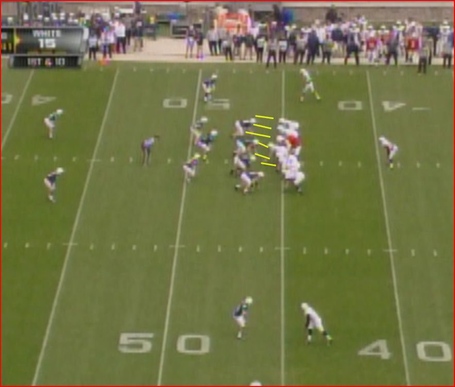 The line gets some nice push at the snap while moving right, but then the defense bows up. The yellow square is to show off my guy Zettel again, who's read the play, beaten the tight end inside, and plans on coming down from the backside ala Lawrence Taylor to stomp on Lynch. 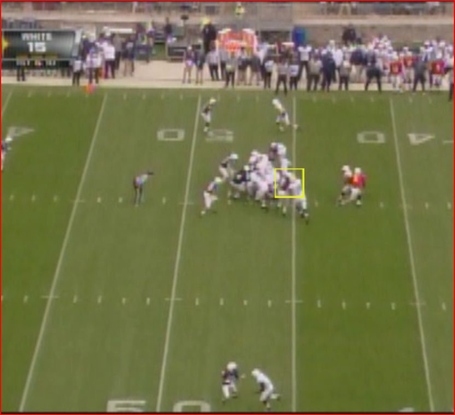 If you asked Lynch, he probably couldn't explain it. Marshall Faulk says he 'sees flashes of color'. That sounds cool to me, and I'm guessing that Lynch probably would say something similar. In any event, at the same time that QB Ferguson buries the ball in Lynch's belly, Lynch jump cuts to avoid DE Zettle, and - TA DA! - sees wide open pastures to his left. 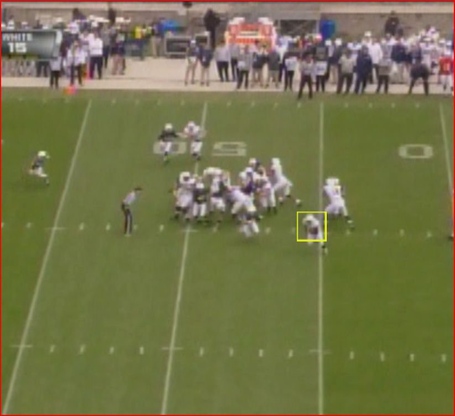 You know the rest of the story. Big Maple turns on the jets, and goes 20+ yards before he runs over a corner instead of going out of bounds. In a spring game. Against his classmate. But hey - when you haven't been in a game situation for over a year, it makes sense.

Damn fun to be talking football again, isn't it? Remembering blog wars ain't too bad either.