It's pretty much without question which Penn State basketball player had the most disappointing season in 2012-2013. Nearly all rising sophomores are expected to take a positive step forward in their development. Jon Graham was no different after showing noticeable improvement towards the end of his freshmen season, earning the team's Most Improved Player award at the 2012 banquet. However, things went exactly the opposite for Graham in 2013, as he saw his minutes steadily diminish to non-existent by the end of the year.

In 4.1-less MPG than his 2012 campaign, Graham managed to average 50% less points and 33% less rebounds, while shooting 12% worse from the field and using 25% less possessions within the offense. He is the owner of the worst individual offensive rating on the team. His playing time slowly evaporated and all thoughts of him progressing seemed to go out the window by Christmas. 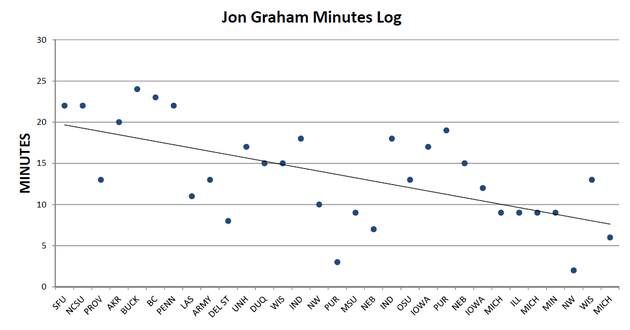 Coming into the season, it was apparent Graham had made impressive strides in the weightroom, dropping a few extra pounds to improve agility and quickness. He remains the most athletic big on the roster with a good combination of strength, speed, and length in his 6'8" 225-pound frame. His physical attributes could help him further develop into a much-needed shot blocking presence around the rim. Graham's 7.7% block% would've been rated in the Top-100 nationally on KenPom if he had logged enough minutes to qualify.

While Graham might have the physical capabilities to play in the post, his skill-level clearly lagged behind in all areas. He was completely unreliable whenever he had the ball in his hands, which wasn't often to say the least. There's not much one can bring to the table on offense if he can't catch passes or convert put-back layups. The fundamentals were missing in Graham's frenetic game, let alone the ability to create with his back to the basket. Perhaps some Graham's woes can be attributed to his apparent lack of confidence, but the Lions can't afford to see Graham log another disappointing campaign next season.

This is the best I could come up with. I remember being pleased with Graham's tenacity on the boards against the Wolfpack's athletic frontline. But his performance had little impact on a game that never was competitive all the way back in November.

Pat Chambers is going to be desperate headed into next season for one of his bigs to emerge as a potential starter and valued contributor. Jon has the most experience and the physical tools to play at this level, but can he refine any of his offensive skills? He's got a looooong way to go after this dud of a year.

Graham was a non-factor for practically the whole season, although he did log 16 points and 7 rebounds in the exhibition against Philly U. He wasn't able to keep hold of the 5-spot after an uninspiring non-conference slate and eventually was replaced by Sasa Borovnjak's finesse game. Graham's regression seemed to complete itself when he logged just 2 minutes in Penn State's win against Northwestern, one of the weakest interior teams in the Big Ten.