Sixteen memes vie for the worst title in meme history. Today we crown a champion of depression, anguish, and sorrow.

Guh. It's the stomach punch regional. Why was the Rookie Regional littered with older memes? Because we've spent the better part of the past 18 months in an endless loop of confused rage and depression. Good times! The scandal landscape was occasionally so dark as to make it difficult to laugh at a guy who stuck a sausage down his pants.

But whatever doesn't kill us only makes us more bitter and jaded stronger. (Maybe?) Let's get to the awesomeness that awaits in the Scandal Regional. 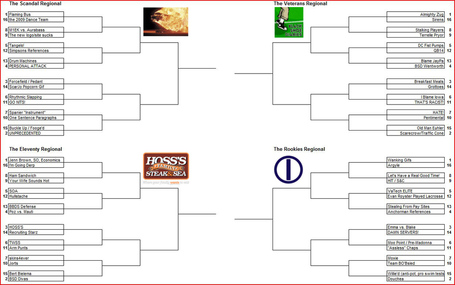 Thankfully, most of the evidence from the epic M1EK vs. Aurabass poo-flinging contests evaporated when the latter deleted his entire library of posts about the dimensions of the Lasch Building shower room. But for those of us trapped in the horror, our scars remain. Will those scars stomp out the pure awesome that was the new SBNation format announcement thread? That one was relatively tame, compared to the new logo announcement. Of the 300+ SBNation blogs announcing a new logo that day, only one blog blew past the 400 comment mark, awash in outrage. So great was the furor, some SBNation overlords showed up to help quell the riot - and they were instantly mobbed, stoned, and hanged from the nearest elm branch on Old Main. It was awesome. I'm pulling for the 9-seed to make a run.

Simpsons references are so wonderful; how could they only garner a 12-seed? Because the commenter formerly known as M1EK employed a Homer avatar, that's why. When a lone gunman can show up to a charity ball and wreck it single-handedly? Well, the fact that Simpsons got seeded at all is testament to its lasting popularity. And even then, most of the community felt the need to establish a 'safe' zone, where poo would not be flung. That safe zone was created with a single word: Tangelo. Within the friendly confines of Tangelo, the community could safely discuss sport, music, cinema, literature, and boobs.

That's a PERSONAL ATTACK! See, mods? Do you see this ^ up here? I have FLAGGED this UNCIVIL comment, and if you don't ban hammer this person in the next 20 seconds, I will be forced to respond in kind - YOU MOTHER F***ER! I'm going to follow you around this thread all day long, and wherever you comment, I will immediately post the [FART NOISE] image!

One man had the courage to step away from the fracas, and openly profess his admiration for Depeche Mode, and other similar 1980's electronic, English, pop tunes. Drum machines, he declared, surpassed the vast majority of percussionists, mostly because humans couldn't keep a beat to save their own lives. And though he was castigated by a veritable legion of skin pounders, that brave man, ckmneon, was absolutely correct about one thing: there's nothing worse in this world than trying to jam with a bad drummer. Unless it's a singer that's always flat. But, yeah. Whatever. It was a funny distraction from the times, and I hope it survives this round, even though I can't find the original thread to give us a link. More disappoint.

Each week for nearly two months we got another term to mock. It was a glorious run, and clearly earned the 3-seed. (GMAFB). And in nearly everyone one of those crap threads, there sat Scarlett Johansen and/or Thriller Jackson, munching on popcorn, while (at least) two people argued on the internet.

Once upon a time, people debated "rhythmic slapping" sounds at BSD. No - seriously. There were entire posts devoted to the phonics of skin slapping to a J.P. Sousa march, and the resultant distortion from the poor acoustics of a shower room. I'm shocked there wasn't an iTunes audio file download available, titled 'Exhibit B'. Thankfully, again, most of the evidence has been lost to history. Here's hoping that the present crap-tastic Nits war, as bad as it is, pulls an upset in this opening round. Because I'll get graphic in describing the #6 meme in the next round. And it won't be pretty.

#7 Spanier 'Instrument' vs. #10 One Sentence Paragraphs

This guy pulled down $1.5M last academic year, in severance? That's outrageous. But not nearly as outrageous as a guest poster asking his way onto BSD, and slapping down an....I don't know. It's not really an article, or post. Let's call it a collection of one sentence paragraphs. Guest poster got lynched for his carelessness on the front page. The outrage boiled over into the Fan Posts, where one of my favorite commenters cranked out a far superior piece, with zero editing, in about 10 minutes. The lesson? You, outsider, better bring your fastball to BSD, or someone smarter than you will crank your weak sauce onto Lansdowne, and take his time rounding the bases.

Fugimaster's "Buckle Up" taunt seems so harmless in comparison to the Sandusky Trial, Freeh Report, and NCAA Sanction threads, doesn't it? Those. Threads. Were. So. Freaking. Awesome. Lots of win in there.

Whew - I need a shower after profiling this regional. You don't feel dirty? Well then, here's 750 comments about the MNC. Enjoy. And let the voting commence.