With two regionals underway, the NCAA sends BSD a Letter of Inquiry concerning its meme culture.

Let's start off with the good news first, shall we? The BSD Meme tournament kicked off last week after a two year hiatus, and in the intervening 12 days, pitted 32 memes in 16 contests with nearly 8,000 submitted votes from at least four different people. Below you'll find an updated Meme bracket with official winners. 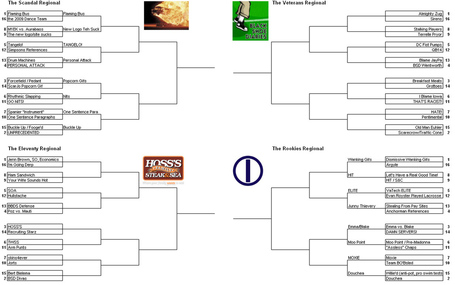 We got the expected: Flaming Bus exploded past the 2009 Dance Team.

We got the 13 over 4 upset special, when Popcorn Gifs, buoyed by a still acute reader distaste for M1EK, took out Forcefield / Pedant / Apologist / Cultist / No Homework / GMAFB / Strawman.

But the first 16 games saw some controversy, as well. Inexplicably, 13-seed Stealing from Pay Sites advanced over protest from Anchorman References. And 15-seed #Buckle Up, seemingly dead in its upset bid of 2-seed UNPRECEDENTED, benefited from eight consecutive flagrant fouls in the closing 90 seconds of regulation to pull out the strangest of victories. Both Anchorman and UNPRECEDENTED appealed to Big Ten Head of Officals, Bill Carollo, who reviewed the video evidence shown below: 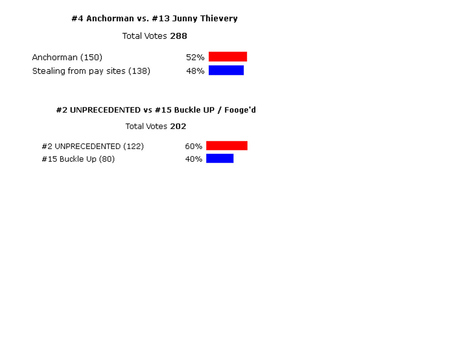 Carollo stared blankly at the evidence for two solid minutes, shrugged his shoulders, and proclaimed, "the play on the field stands as called. The video evidence was inconclusive. #BuckleUp and Junny Thievery win, and Ohio State is awarded the Rose Bowl."

More troubling, if not more baffling, was news from BSD Editor Jared Slanina, who announced that Black Shoe Diaries had received a Letter of Inquiry from the NCAA. "Mark Emmert, in another power grab, decided that the NCAA held standing in the administration of our blog, Black Shoe Diaries," stated Slanina. "And, though they couldn't prosecute North Carolina for academic fraud; nor Miami for paying players with prostitutes and boat rides; nor - ahhh, to hell with it. The douchea just sent us a letter of inquiry about our meme tournament blogging practices. So we've got that going for us. Which is nice.....whatever. Emmert's such a turd."

Black Shoe Diaries' mothership, SBNation, was also made aware of the NCAA's inquiry. SBNation put collegiate blogging honcho Jason Kirk in front of the situation. Kirk announced that SBNation would retain the services of Freeh, Sporkin and Sullivan, in an effort "to uncover all of the facts, wherever they may lead us, and provide best practice recommendations." When asked about the selection of Freeh, given its past dealings with Penn State, Kirk responded only with an animated gif: