One last opening round regional - Eleventy.

This is the last full regional profile. We'll start picking up the pace after this one, so that your eyes don't bleed.

Let's get it done. 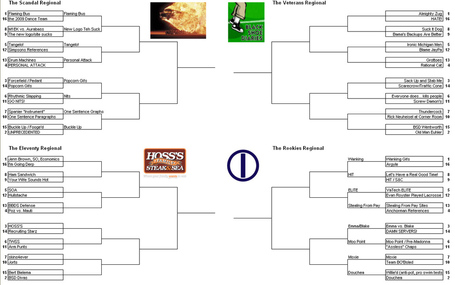 It all started harmlessly. Asked about that year's State Patty's Day, Jenn Brown was cheerful, and simply trying to share some insights when she spoke to The Daily Collegian's Chris Bickel on March 1st, 2010. Frankly, Jenn didn't even provide the best quote from that season's State Patty's Day - shared by 06Lion in this fanshot, which no one read. Nevertheless, Jenn Brown's morally casual attitude immediately earned her a legion of followers on BSD, sight unseen. Different BSDers thought they discovered her Twitter account, and her Spacebook page. Three years later, alumna Jenn Brown - the real one, not the sideline reporter - remains like the fabled mountain yeti: sought by hundreds of dudes living in their parents' basements, still elusive, still without photographic evidence. Can Jenn Brown walk right past 16-seed I'm Going Derp in the HUB, wearing the same clothes she wore out last night? Of course. This won't even be a contest.

You might think Ham Sandwich began with a talk about quarterbacks, or the offensive line. To be the best of my search capabilities, that doesn't appear to be the case. Ham Sandwich first made the 2-deep as the reserve tight end, behind Kevin Haplea, and ahead of Garry Gilliam, Andrew Szczerba, Nate Cadogan, and - that's right - true freshman Kyle Carter, last year's Big Ten Offensive Freshman of the Year. (True freshmen were (mostly) ineligible at PSU, until 2012).

And as freakishly talented as Ham Sandwich is, it will get a serious game out of 9-seed Your [blank] Sounds Hot. A quick search reveals 861 comments on BSD containing the exact words "sounds hot". That's eight hundred, sixty-one - nearly an entire Sandusky Trial Open Thread of nothing but 'your girlfriend/wife/sister/cousin/mother sounds hot' comments. I'm not clicking 'next' 90 times to find the first one, but I can tell you that the last one was posted just a few days ago, by No.21 in this thread - and it's still going green. That, my friends, is a deep, deep squad.

Stephen Obeng-Agyapong is rarely amused. As a freshman from out of state, SOA was unfamiliar with Lift for Life, and at one point, had raised $0 - until RUTS discovered him, and BSD adopted him, pushing SOA past his goal in about 20 hours (note to WeAre! editors: use frown photo to increase donations). SOA grew into a folk legend at BSD, though he wouldn't see the field for another two years (obligatory: SOA finds your lack of faith disturbing). In the interim, psuwxman (and Adam Shell) got SOA to crack a smile.

The Poz / Mauti debate isn't about who supports the run better, or who has better pass drops. It's hunkability. And though Mauti's passion stirred the emotions of a few BSDivas (and Dudes), Poz's catalog of shirtless photos probably carries the day. But has an official winner ever been crowned?

How did the Bend-But-Don't-Suck Defense land only a 13-seed? The selection committee works in strange ways. Maybe they noticed the drop in BBDS mentions. Maybe they saw the change in commentor tenor about BBDS pre-2009 Rose Bowl, and post-2009 Rose Bowl. No one can say for certain. But this much is clear - BBDS won't be getting many female votes in its opening round match, and that's something it will have to overcome if it wants to survive and advance.

FACT: HOSS's is great food, if you like eating from a dumpster, or if your crack habit leaves you with only $4.57 for meals. We've debated the (lack of ) merits of this hog slop often. Like here. And here. And here, here, here, here, here, here, here, here, here, and here. But the original debate? That started right about here. Now, you have to scroll 1/2 of the way down the page of a 750 comment thread (that began as a Nick Saban to PSU rumor), but you should stop as soon as you see OctaShields note that he "always saw Saban as more of a HOSS's guy" (than a Corner Room guy). 30,000 comments later, we still can't agree on a definition of "good".

Recruiting Starz is a 14-seed? The debate we hold each February thru August? Yep, and it's probably because the starz dudes began introducing math, throwing fancy pants terms like 'average', 'mean', and 'standard deviation' around, when there were individual examples of Graham Zug we could point to each year. They moved the goal posts on us via strawman. Personal attac - never mind. Wrong bracket.

There are (at the time of the writing) 713 comments on BSD with the exact phrase "TWSS". Impressive. Long. Hard to beat. Very hard.

But can TWSS beat this meme off the bracket? Or does Arm Punts show its stamina, proving it's ready for another round of fun?

In February 2010, a commentor appeared from mythical CandyLand onto BSD. His handle? skins4ever. He penned a fanpost critical of Ed DeChellis. He was one year ahead of his time, apparently. The fanpost exploded into a 400+ comment free-for-all. Embarrassed, the youthful, pleasantly trollish skins4ever deleted the fanpost - but not before an enterprising BSDer, AdamShell, captured the entire thread and shared it for all future BSDers to enjoy. So, uh, enjoy. Wah? You need moar comment? Then have at it.

10-seed Jorts? 10-seed Jorts. But this isn't the run of the mill, standard interwebs jorts meme. It's the original BSD jorts, worn by our former fearless leader with pride, in a grotto somewhere in Texas. As JtotheP highlighted in the grottoes rundown, the original BSD jorts pic is lost to history. But there does exist an urban camouflage, cargo-short that hasn't yet been deleted. And that's still worth sharing.

¿quiénes son las BSDivas? That's just a pack of the hippest chicks on the interwebs. They run the BSD After Dark threads, the sexy olympic gif threads, and the bar threads. They're the organizers. They get the season tickets squared away. They do all the cooking around here. They win the Pick 'Em contests. They know more football than you do, which is how they get on the sidelines. Heck - they actually run this whole place. And, really, they sort of always have.