Poser memes dropped out long ago - only the sixteen strongest BSD Memes remain. There are no easy match-ups from this point forward. Each meme needs to bring it to advance. 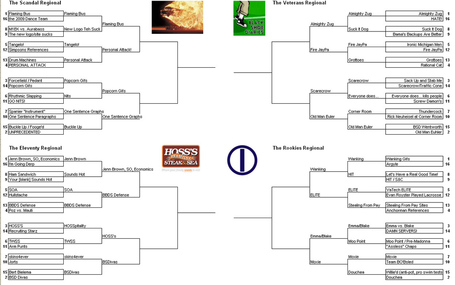 Zug has yet to break a sweat. Fire JayPa could be his next victim.

14-Seed Scarecrow, et.al. O-Line's proven to be this year's bracket buster, reaching the Sweet 16 by comfortable margins of victory. That's not the case with blue blood, #2 Old Man Euler. Everyone expected Euler to make it this far - but he did so only by the slimmest, 4-point margin over #10 Rick Neuheisel at the Corner Room in Round 2. Euler needs to step it up, or he'll be priced out of this tourney.

It looked like Wanking Gifs had a stiff test in the first round, vs. Argyle, and again in the second, vs. HIT. Instead?

Emma needs to get serious this round. She and Blake will need more than a wink and a smile against Moxie, who has been kicking every meme's ass, as retribution for the perceived slight of being a 7-seed. Moxie beat the tar out of 2-seed Douchea last round, 90 - 40.

#10 One Sentence Paragraphs vs. #14 Popcorn Gifs

The 'graphs are still causing consternation. Popcorn remains, as ever, sitting back, munching away.

What a comeback. Last round, Jenn Brown trailed #9 Sounds Hot by 14 votes at halftime. She was still down 8 heading into the fourth quarter. Brown tied it up at the buzzer, and then pulled away in overtime to win by two. Incredible. But the BBDS Defense won't allow a comeback like that, so Brown better be ready early.

This. Will. Be. Awesome. Will a BSDiva go to HOSS's for a date night?