Is it still the offseason? Yes. Yes it is.

And then there were four. Congratulations to Flaming Bus, Scarecrow et.al., Moxie, and BSDivasJenn Brown, on winning their respective regionals. Let's take a quick look back at how each meme reached this point. 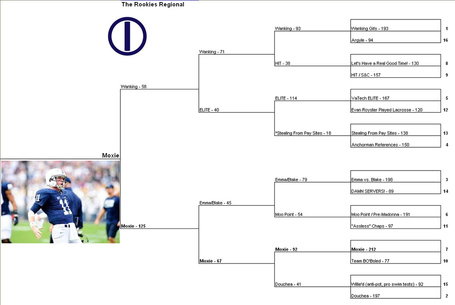 This is the bracket that started it all, six long weeks ago. The regional looked deep, with strong memes like VaTech ELITE, HIT/S&C, and Moo Point. Fan favorite Argyle landed all the way down at the 16-seed.

The bracket was not without controversy. Big Ten officials awarded Stealing From Pay Sites a disputed victory over Anchorman References in the first round. That quickly became a moo point as VaTech ELITE destroyed the ref's benefactor in the second round.

Ultimately, the Rookies Regional came down to three memes, as it usually does on the internets: Wanking gifs (read: smart-assery); Emma/Blake debate (b00bs); and Moxie (.........?.......). Seeded 7th, Moxie stormed out of the gate, hanging 212 votes on #10 BO'B - the most for any meme in any round. That was BO'Bsled, by the way. You know, the new coach we all adore? Moxie kicked BO'B in the junk, pissed in his Wheaties, and, well, did Moxie things on his grave. Surprising? Yes.

But the most shocking part? It didn't end. Moxie doubled up Douchea, beat the b00bz meme by 22, and, in the regional final, trounced #1-seed Dismissive Wanking gifs by 67 points. What an unbelievable run.

The 2014 prospects look dim for "HIT". With JT (strength coach John Thomas) no longer at the helm, this meme simply didn't have the stamina to go more than one or two good rounds. Without an infusion of new talent, it's same old roster might not even get it qualified for next year's bracket.

Similarly, "Stealing From Pay Sites" lost its primary scoring threat when Jeff Junstrom retired. And Pit Bull got voted to Alaska - so it's unlikely that his retarded grin will appear in any more commercials, limiting his ability to return "Let's Have a Real Good Time" to its former glory.

Anchorman References fell victim to Big Ten officiating while getting royally screwed out of a first round win. But, with rumors of an Anchorman II on the horizon, it could be emerging from a pool of Sex Panther cologne by the time May 2014 rolls around. 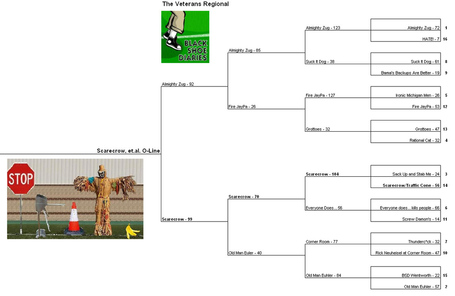 Time changes everyone and everything. Well, almost. What's the one thing that'll resonate 40 years from now, with as-yet-unborn Penn Staters? Complaining about the offensive line. And in 2013, 14-seed Scarecrow and his gang of stationary misfits was the beneficiary of this timeless tradition.

JtotheP, who, along with bscaff and skarocksoi, remains under investigation for excluding Breakfast Meats from the tourney, awarded Almighty Zug the 1-seed, and no one raised an eyebrow. Zug was a past meme tournament champion, and had even defeated J Lehman for the coveted 'Most American' crown, vs BHGP. We all expected Almighty Zug to roll. And he mostly did - nearly shutting out #16 HATE! in the first round, and covering a massive 80-point spread against #8 Suck It Dog in the second round. But Father Time robbed Zug of half a step, and gave #14 Scarecrow a brain for the regional final.

#2 Old Man Euhler simply didn't look like himself out there, barely edging past #10 Rick Neuheisel at the Corner Room in the second round, before showing his age, and getting rolled by Scarecrow and the gang.

#11 Screw Damon's? Consider them screwed, since they declared bankruptcy two years ago, and have been closing their doors all over the USA.

#10 Corner Room. Given that BO'Bsled was rumored to be heading out of town last January, I'm guessing that we'll hear lots of stories about coaching personalities visiting the Corner Room each offseason for the foreseeable future. 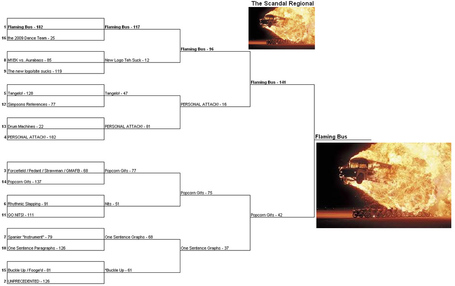 Blowed out. The Bus exploded all over the 2009 Dance Team, destroyed New Logo Teh Suck, and in the regional final, choked out Popcorn Gifs by a cool hundy. PERSONAL ATTACK! was the only meme to keep a match with The Bus under a 100-point margin. The lone 1-seed to make the Final Four, Flaming Bus looks unstoppable.

The story of the Scandal Regional, besides Flaming Bus' dominance, was just how poorly the most scandalous memes performed. 3-seed "Forcefield-Pedant-Strawman-GMAFB-No Homework-Uncivil-FLAGGED", despite its many regular season accolades, never even got out of the starting blocks against Popcorn Gifs. Similarly, 8-seed M1EK vs. Aurabass and 6-seed Rhythmic Slapping just couldn't find the beat. Perhaps each of those memes picked at wounds not yet fully healed? As BSDer 87Townie noted in the comments, "reflecting on the M1EK/Bass debacle...in hindsight, I wish I had done less." Well stated, sir.

7-seed Spanier Instrument has no where to go but down. If you're still invested in this meme, I advise you to sell. Its product line has grown stale.

You may want to divorce yourself from 15-seed Buckle Up, as well. "Buckle Up", at one time a likely 2-seed, survived the first round only by the grace of Ed Hightower's referee whistle. Then it got smoked in the second. Fugi's maturation and this meme's invigoration appear inversely correlated.

None. And, for our own mental well being, let's hope that's accurate. 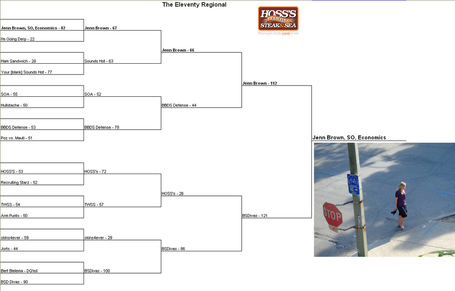 From 1 thru 16, the Eleventy Regional was absolutely loaded. The first round saw five of eight battles decided by a handful of votes, with one of them - #3 HOSS's vs. #14 Recruiting Starz - settled by just a single click of the mouse.

But the best battle may have been 1-seed Jenn Brown (sophomore - Economics) against 9-seed Sounds Hot, in the second round. Sounds Hot jumped out to a massive early lead, and it looked like Jenn Brown's night would end early, sober, and lonely. But, like a true champ, the meme got off its knees, took the game to overtime, and strutted home the next morning, a smile on its face and pumps in hand.

Ultimately, another championship simply wasn't in the cards for the decorated 1-seed this year. In the regional final, facing an equally curvy meme, 2-seed BSDivas, Brown pulled hair, scratched, and clawed in an epic cat fight. But BSDivas stood victorious, with a comfortable 10-point win, avenging both a 2010 loss to Brown, and that squad's early tournament failure to advance 4-seed Poz/Mauti into a round where bare chested beach photos may have been used.

I don't know how she did it, but she did it again. Jenn Brown (sophomore - Economics), had lost her regional final vs. BSDivas as of Wednesday night, as we documented above. But by Friday morning, there she was again, hi-fiving random dudes on her walk back to Pollack, with a photo of her 17-point victory over BSDivas on her cell phone.

12-seed Hullstache created a tradition, set a standard of excellence, and made its mark at BSD despite humble beginnings. But time waits for no meme. When you've graduated from the regular roster three seasons ago, you eventually lose your spot in the lineup to an angry, yet surprisingly pleasant, reserve safety. Also, zero b00bz.

9-seed Sounds Hot. The most used meme in BSD history, "Sounds Hot" appears to be gaining momentum, rather than losing it.

One Last Note Before You Vote

Hollywood makes blogging and commenting look like fun. Heroes and villains do battle on the internets, and in meme tourneys, yet shake hands and become best buddies at the end. But reality is different. In the real world of blogging and commenting on the internets, sadly, sometimes those bloggers and commentors actually die in the struggle. Sometimes, there is no happy ending. And, it's in honor of those who gave their screen names because someone, somewhere on the internets, was wrong; or, because the new site looks like dogshit in IE8; or because BSD is blocked at work; or because you finally got a girlfriend. I'm getting off track....Whatever the reason - our fallen comrades and enemies, we honor you now with a moment of silence sorta quiet time:

(queue soundtrack by clicking this link)