Yes, he's the son of THAT Troy Vincent. And he's the 12th member of Penn State's 2014 Recruiting Class. 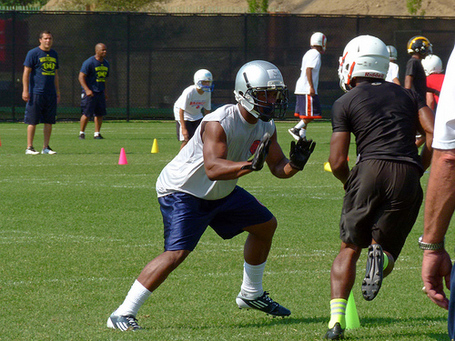 Photo by MaizeAndBlueNews via flickr.com

Cinema: Sadly lacking in highlight videos, but this should whet your appetites.

Penn State has been sitting pretty for Vincent for a long time now--with each successive campus visit, the question became when, rather than if, he'd commit to Bill O'Brien. Finally, at today's recruiting BBQ, he pulled the trigger, joining a shockingly strong recruiting class that O'Brien continues to put together despite the weight of NCAA sanctions looming large. Transferring to the school last year, Vincent played a key two-way role for powerhouse Gilman, which last year won its second straight conference championship. A player often singled out for his football smarts and versatility, Vincent has been a hit on the camp scene this summer, earning all-NFTC accolades and the following glowing scouting report:

Being the son of a former NFL All Pro doesn’t hurt your football chances. Vincent is a tremendous athlete that could play on either side of the ball, as a cornerback is very physical with initial jam on the receiver very rarely getting beat when in press coverage. What really impressed the coaches was his ability to recognize what the receiver was going to run and breaking up a good number of passes during the half skelly and one-on-one periods.

If Troy Vincent, Jr. is anything like his dad, both on and off the field, he'll be a tremendous asset for this Penn State program. Not only was his old man--a Wisconsin grad--one of the best NFL corners of his day--a 5-time Pro Bowler and a 3-time All-Pro--but he was universally regarded as one of the most well-spoken, thoughtful, and generous gentlemen in the game. A winner of the NFL's Walter Payton, Whizzer White, and Bart Starr Man of the Year Awards over his career, Vincent served as president of the NFL Players Association, has helped to educate incoming players about managing their finances, and is involved in a host of philanthropic ventures. Point is, the kid comes from good stock. Odds are, he'll be exactly the sort of program ambassador that Penn State seems to churn out with regularity.

Oh, right, and by all accounts, he's also a heck of a cornerback. After going through a season in which Ted Roof could only rarely go to a nickel package because of a lack of depth in the secondary, Bill O'Brien and crew have stocked up on defensive backs, and they've been getting talented ones. Vincent's the most highly touted of a group that already includes corner Daquan Worley and safety Marcus Allen, and, provided this doesn't signal an end to recruiting DBs, potentially Dravon Henry, who'd be the biggest blue chipper of them all. He also joins WR Troy Apke and WR Troy Reeder as incoming recruits named Troy, which, while meaningless, is kind of an amusing coincidence.

As for whether Vincent makes it on to the field sooner rather than later, that's very much up in the air. Penn State's extraordinarily young at corner--of the 6 players listed on the three-deep, all have either freshman or sophomore eligibility. If O'Brien, John Butler, and Anthony Midget want to play it slow with Vincent, they'll be able to. But given the scholarship crunch, his athleticism and experience playing both ways could parlay into a prominent role on the special teams units as early as 2014.

Vincent's commitment brings the class total to 12. NCAA sanctions cap the Lions' class at 15, though the roster limit of 65 may prohibit O'Brien from taking even that many.