O'Brien and the staff finally get their desired QB recruit. 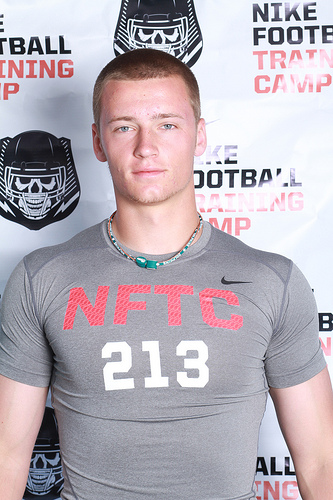 Photo by Student Sports via farm9.staticflickr.com

I'll be spending the next 4 years in Happy Valley, just commited to Penn State! Thanks to everyone who supported me along the way!! #WeAre

O’Connor has been Penn State’s top (and pretty much, only) quarterback target for this class. Originally from Ashbury College in Ontario, Canada, he transfered to Baylor School in Tennessee before his sophomore season. He now attends the IMG Academy in Bradenton, FL where he has been working with former Heisman Trophy winner, Chris Weinke. He has been recruited heavily by Fisher and O’Brien for some time now, but originally had Michigan State as his top option. However, once MSU picked up a commitment from Chris Durkin, they pretty much cut all ties with O'Connor, and reports are that his MSU offer was no longer on the table. Penn State jumped to the top of his list, and stayed there until the end despite a late offer from Missouri.

O’Connor was an important target for O’Brien before, but with the transfer of Steven Bench, he became an absolute priority. When he officially becomes part of the team (And he’s planning on enrolling in January), he will start as the team’s 3rd string, behind Fergie and Hack. However, Ferguson will only have two remaining years of eligibility when O’Connor arrives, so the quarterback position absolutely needs depth.

However, O’Connor’s commitment is more than just depth, as he is a very talented athlete. He has ideal height for a QB, especially one for O’Brien’s system, and has very solid arm strength, accuracy, footwork, etc. One thing that Coach Weinke was quoted as saying about him, was how impressed he was with his growth in such a short period of time (since his move to IMG). Anyone that is able to have such success learning new plays, and improving their mechanics, is exactly the kind of QB that Penn State is looking for, with such a complex playbook. Adding O’Connor to the current stable of quarterbacks, gives this position a wealth of talent, and don’t be surprised to see him pushing Fergie and Hack for time as early as next season.