Share All sharing options for: BSD Meme Tourney: The Final 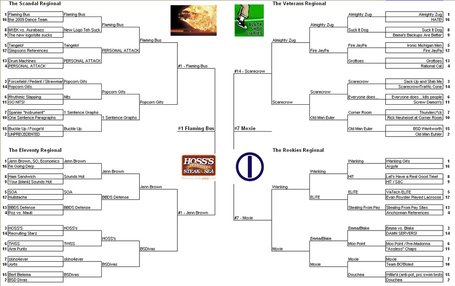 That, friends, is a lot of stupidity. Today's final makes it a baker's dozen. And yet, we're still mired in the doldrums of the off season. For the love of all things Holy, can we at least start training camp? Please?

Admit it: you didn't think Moxie could make it this far, did you? You doubted Moxie from the start, and picked Team BO'Bsled over him in the first round. And what did you say when Moxie knocked out BO'B? "Well, Moxie won't beat Douchea...". And when Moxie beat Douchea, you said "Moxie has no shot against Emma/Blake. Emma/Blake's a 5-star recruit". That was followed by, "Moxie's had a great run, but too bad it's going against Wanking Gifs. Now that Wanking Gifs got its grades straightened out, I expect Wanking Gifs to take the job following the Blue/White game, where Wanking Gifs always excels. Moxie has no shot against the athleticism of Wanking Gifs."

Yet, incredibly, here stands Moxie. It looked hopeless against Veterans Champion #14 Scarecrow. Moxie fell behind by as many as ten, and though he closed to within 4 votes, Moxie didn't appear capable of bridging the gap and taking a lead. Staring at permanent maiming by Scarecrow, Moxie turned suicidal, stealing a horse and riding right at Scarecrow's line, hoping turnstile, traffic cone, or someone from that side, would simply put a bullet in his head.

Instead, Moxie's death wish ride at Scarecrow rallied the Scranton/NEPA faithful. In attempting to produce his own death, Moxie was instead elevated past Scarecrow to the Meme Tourney Final, and into BSD lore forever. Moxie also got a baseball field named after him. Which is nice.

[Ed. Scarecrow and the Gang re-enter the tournament].

#14 Scarecrow and the Gang

[Ed.: Monday, July 1st, at noon, Moxie held a comfortable lead. Monday, July 1st at 5pm, Scarecrow and the gang had received 26 consecutive votes to move back ahead, while the first 450 votes had been split nearly evenly. So - down goes Moxie. Down goes Scranton. Both fall victim to sabotage, perpetrated by a bored member of the work force. For the record, I encourage this kind of behavior, because absurdity. Except for the part where I have to rewrite everything.]

And the Flaming Bus just keeps on rollin'. Not even Jenn Brown (sophomore - Economics) could get out of its way.

For one last time, friends: let the voting begin.