University of Central Florida comes to Beaver Stadium Saturday for a 6pm kickoff.  They're bringing a talented, experienced quarterback (Blake Bortles), 4 - 5 wide receivers, and at least one very talented "good, solid" back (Storm Johnson - runs hard).  Although Penn State's defense has played very well through two games - and the defensive backfield, despite its youth, has been a revelation - they're also likely to be challenged like they haven't  been to this point in the season.  And it wouldn't hurt the PSU defense any if the PSU offense could play keep away, and score touchdowns at the end of 12- and 14-play drives like the Moxie-led squad did in 2012.

Through two games, Penn State's offense is just 2 for 26 on 3rd down - 7% conversion.   That's not how you play keep away.  It's not winning football against decent squads.  Let's dig into each of those 26 third downs, and see what conclusions we can extrapolate for this Saturday.

First, let's get the Syracuse game out of the way.  Penn State, officially, finished 1 for 16 on 3rd down, according to your box score statisticians.  That's not the whole story, though.  One of those 16 was an end of game victory formation - the last snap of the ball game.  Penn State didn't convert that 3rd down, but who really cares?  So that gives us 1 for 15.

Another one of those third downs was, sort of, an actual conversion.  It was 3rd and 9 from the 50 yard line, late in the 3rd quarter.  QB Christian Hackenberg took a 5-step drop, and fired a bullet into a hole in the zone to Allen Robinson for a first down.  Robinson ran with the ball to the Syracuse 25, and then was stripped*, and the ball was returned to the PSU 27.  In the box score, that's another failed conversion.  I say let's count that one.

*Every PSU fan thought Robinson's knee was down.

That puts PSU at 2 for 15...no great shakes, but it beats 1-16.  There's one more we should count, as well.  Penn State had a 3rd and 5 at their own 19 in the 3rd quarter.  Hack threw a "go" to Robinson, who was held all the way down the field.  Defensive pass interference was flagged, and PSU got the first down - but it didn't count that way in the box score.

So - all of that is a long explanation for why, when looking at the table above, you'll see PSU converted three 3rd downs versus Syracuse, out of 16 total chances.  Hooray!  We're up  to 19% without doing anything.  Nice, right?

Exiting the 'Cuse game, BOB stated he "wanted to break tendency", and he "put the offense in some bad situations".   And the best part about BOB - or at least, one of the best parts - is that he's not blowing smoke, either.  The dude self-assessed, shared his thoughts (to a degree), and made adjustments the very next week against the Fighting Barmas.  Check out the table below (it's third downs vs. EMU):

How many times did BOB run on 3rd down versus Eastern Michigan?  One.  One bleeping time.  That's more like it, BOB!  And that one time happened to be a 3rd and 24 - a give up run to Zwinak, who just happened to bust it for 20, prompting BOB to go for it on 4th down.  As stated previously, BOB means what he says, and acts on it.

Now, you might not be thrilled that Penn State finished just 1 for 9 against EMU (oh - by the way...the missing 10th 3rd down versus EMU was also the last snap of the game...damn statistics).  BOB probably wasn't either.  But there aren't 10 teams in America that are going to be successful when facing 3rd and long (10+).  BOB and the boys faced 3rd and a mile* six times against EMU, converted none - and still scored 45 points.

In "normal" 3rd down situations, eschewing the run for his comfort zone, Penn State finished 1 for 3 versus EMU.  33%.  That's still not great.  It's not good, even.  But it's a far cry from the box score 2 for 26, and, despite the small sample size, it's (arguably) a more accurate reflection of where the squad's at after two games.

This is a good one.  Eastern Michigan, about whom I wrote they never blitz last week, uh, blitzed (a lot).  And they meant it on this snap, sending not 5, but 6 rushers - all 4 down lineman and both LBs from their 4-2-5 nickle - with both backers coming straight up the gut, Dick LeBeau style (for the record - EMU sent 6 rushers 1 time out of 77 defensive snaps I watched...Ron English just wanted to make me look bad).

BOB calls one of his favorites, an "11" - 1 RB, 1TE - bunch right.  Because of the blitz, EMU has just a single high safety-man, and all four PSU receivers are locked up in man coverage.  Nice.  Hackenberg needs to "see" the blitz without seeing it, recognize he'll have man-under coverage with a single high safety, make his choice, and get rid of the ball on time. 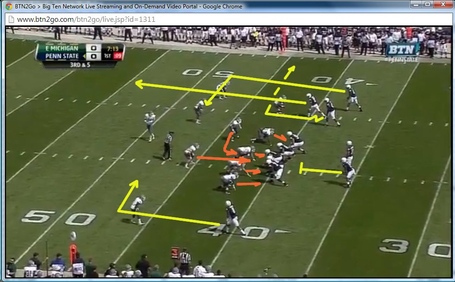 Hack does all of that, because Hack's a stud.  And the line, almost, picks up the 6 man blitz with double "A" gap stunt - no easy task.  Almost.  RB Belton mostly picks up the first backer thru the gap, and LG Miles Dieffenbach only gets a piece of the 2nd backer coming thru, after passing off the DT to C Howle.   But overall, it's pretty solid work by everyone.

Hack gets rid of the ball on time, and Allen Robinson beats his man by a country mile, which is hillarious since it's just an 12-yard square IN.  His route is approximately 13 steps, and he's built 2 yards of separation.  But, this being Hack's first Beaver Stadium game, the ball comes out high and hot.  Incomplete.  Box score failed 3rd down.  This one, though, is getting converted more often than not. 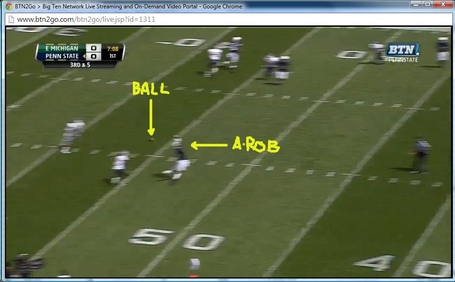 The second "normal" 3rd down came in the 2nd quarter.  Penn State faced 3rd and 4 from the EMU 32.  EMU blitzed (again).  Hack read it, and fired hot, and complete, to TE Kyle Carter.  Carter was tackled immediately, just shy of the sticks.  BOB went for it on 4th down, and converted via Hackenberg run.

Penn State got its third "normal" 3rd down early in the 3rd quarter, with the score at 17-7.  EMU blitzed (of course), and Hack read it, released the ball, and completed it to true frosh Richy Anderson.  It was a great conversion, and, being the 3rd in the series of three "normal" 3rd downs, exhibited a linear improvement from first to last.

Hey - I'm with you.  Two for 26 ain't pretty.  And the first two games haven't been the prettiest either.  But I think there are extenuating circumstances, beyond the fact that it's the first two games with a true freshman at the helm.  And I like the trend that's developing.