Penn State rushes 30 times for 81 yards against Syracuse. Let's break it all down.

Welcome to 2013, a whole new season, where running for 200 yards against Wisconsin's #9 rush defense in 2012 sets the expectations, but counts for absolutely nothing. On a hot August Saturday in New York, Penn State ground out just 81 yards on 30 rushes against the Syracuse Orange, in a 23-17 win. And the questions and excuses began immediately.

Syracuse sold out to stop the run. Syracuse's Bromley and Crume were monsters. Where were all the tight ends? Why was BOB running on third down, and what was happening with the play calling in general? Was the line confused with assignments? Were backs missing holes? Should we use fullbacks? What if we stuck Galen Hall back in the booth to call the running plays?

Let's take a few hacks at these, and other questions, like how to stop world hunger, in this week's BSD Film Room.

Syracuse, as we talked about in the preview, wasn't going to simply line up and play ball. They were going to blitz, and stunt, and shift, and give one look only to change into another, all the time. In the shot below, the Orange begin in a base 43, shifted over to Penn State's left - the two tight end, strong side of the formation. Tight end James motions right, and stops on right tackle Gilliam's outside shoulder, effectively in a standard two-TE alignment. Because of Syracuse's shift, Penn State has numbers on the right side after the motion. The Orange have only 3 defenders (#'s 1, 2, and 3 below) on Penn State's right. As we mentioned last year, this is an automatic "check to run", in BOB-mentor Ralph Friedgen's world. Numbers is a good thing for Penn State. 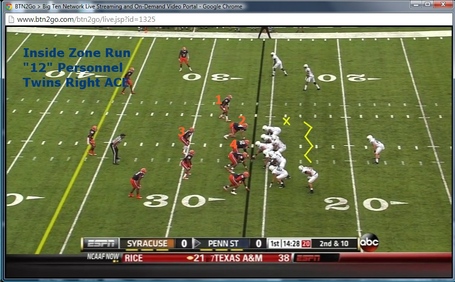 But, of course, Syracuse can't even play that defense in a straightforward manner. They employ a "gap switch" to screw up Penn State's blocking assignments. The Orange nose tackle, #52 Crume (labeled #4 below) has the backside "A" gap - the gap between C Howle and G Dieffenbach. Syracuse OLB #35 Davis (labeled #1 below) immediately comes across the line of scrimmage, setting the edge, and defending the playside "C" gap - the outside. All of that is fairly normal. But Orange DE #94 Welsh (labeled #2) and MLB #11 Spruill (labeled #3) switch gap responsibilities. Welsh, as a DE aligned on RT Gilliam's outside shoulder, might normally have "C" or "B" gap responsibility. Instead, he loops inside, taking playside "A" gap responsibility - the gap between C Howle and G Urchsel. MLB Spruill folds over him, hoping to shoot into the "B" gap, which should be less well-manned because of Welsh's stunt. 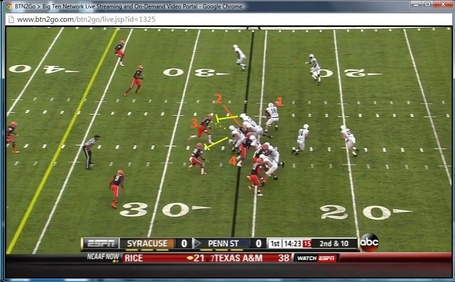 One of the nice things about a zone blocking scheme, though, is that you don't have to care as much about who, specifically, enters your zone. Guard Urschel was uncovered pre-snap, expecting to lookup MLB Spruill, and now he has a DE in his lap. No big deal. Urschel handles it like a man, sealing the DE inside using the DE's own momentum. C Howle leaves the NT for G Dieffenbach to reach - which, is not a fun block to make. Howle looks to the playside backer for a second (above, dotted line), isn't going to reach the MLB who was coming on a stunt, and turns backside, to wipe out the backside LB, #38. RT Gilliam, who began the play covered, and now is not, needs to look to the second level.

Gilliam does. In the shot below, he has blotted out MLB Spruill (labeled #3), and is driving Spruill towards the Penn State bench. G Urschel has collapsed the DE Welsh (labeled #2), creating a massive "B" gap hole through which RB Zwinak is now charging. There's no coverage for the hole either, as C Howle (with a yellow X below) locks on to the backside LB, #38. Zwinak and the offense get 9 yards on this 2nd and 10 rush. 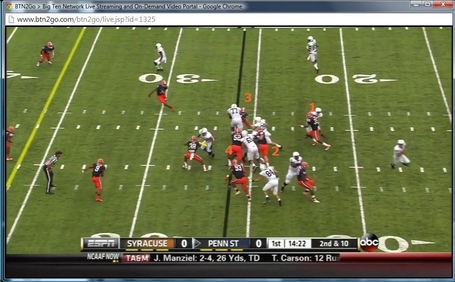 When Penn State ran against base 43 fronts, they usually ran effectively. Unfortunately, Penn State did not often face base fronts. In the shot below, Penn State faces 3rd and 7 from its own 26. Penn State has "11" personnel on the field - 1 RB, 1 TE. Each of Penn State's receivers are locked up, man-on-man, with ZERO safety help, because Syracuse has stuffed all of the rest of its defenders on the line of scrimmage.

Does Hackenberg check out of the draw play BOB called, and throw a fade or slant to one of his receivers? No, Hack does not. And Hack, in the very first quarter of his very first D1 game, probably isn't allowed to check out of the play call. But looking at the shot below, you have to ask yourself: WWMD - What Would Moxie Do? 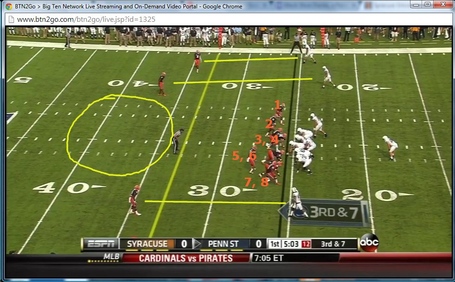 After halftime, Syracuse became consistently more "crazy", putting 8, and even 9, on the line of scrimmage nearly every play, no matter what formation BOB ran out there. Below is one more example, from the 3rd quarter. Take a look at the bottom of the shot - Penn State has three receivers to the left. Syracuse has only two defenders out there, one of whom is a linebacker (labeled #10), with zero safety help (both safeties, labeled #8 and #9, are 8 and 7 yards deep, focused only on the backfield). Penn State stuck with the called run, and got stuffed. (But, of course, BOB also went deep a couple of times, and scored big twice, with TDs of 51 and 54 yards.) 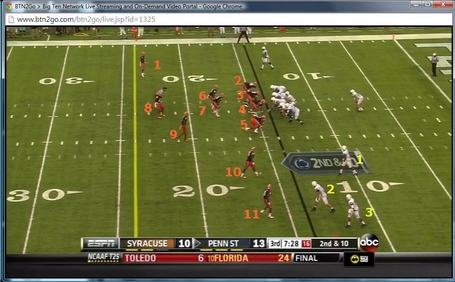 **Syracuse got even crazier after halftime, in an attempt to stop the run. But we also got our big passes in the 2nd half.

*BOB broke tendancy, and ran on 3rd down - something he didn't do last year.

**Tight ends signaled run to Syracuse - and damn if they didn't stuff the box with 3 tight ends on the field. Penn State found more success rushing with fewer big bodies between the tackles, not more.

I'm not worried about the run game. We're going to be fine - and we'll be better than fine when Hack can change out of a play. The line did a pretty solid job overall, given the mass of bodies they had to clear out of the way. The line also did an excellent job, overall, in pass protection, particularly considering the stunts, shifts, and exotic blitzes Syracuse threw at them. Only once did Hack get smacked by a free runner - and that one wasn't on the o-line (it was on Hack). Last - Bromley, Crume, and Raymon - in that order - really were beastly, tough assignments. Urschel, who had Bromley in his face most of the day, would probably be the first to agree. And yet, those three combined for zero sacks, and 2 tackles for loss - half the stats of Penn State's DaQuan Jones, by the way, who had one whale of a game.

Did anyone else notice that Penn State ran an odd front about 10 times, usually in passing down-and-distance? I thought it was pretty sweet, and got good pressure. But among the more unique defenses new DC John Butler threw out there was this one, below: 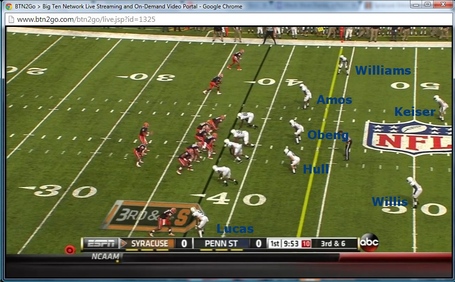 It's your basic, 99% of the time, Penn State "43 Stack-Cover 3". But look at the three linebackers: Hull, Obeng, and Amos. Kinda funny, right? Not your typical "dime package". Maybe it'll surprise some unsuspecting QB this year.

How about we try introducing grades for players? Let me know in the comments if this is a worthwhile endeavor or not. The methodology employed is chimpanzee easy: a) make a good play, get a +1; b) make a bad play, get a -1; c) the sum of those is your grade. Is it fair that a game winning interception (+1) counts the same as a run stuff (+1)? Or that a blown coverage leading to a touchdown (-1) counts the same as losing contain on a 10-yard run (-1)? Look - I have enough trouble with math as it is. The last thing I need is to start awarding or deducting fractions.

I don't know who's in charge of tallying tackle stats, but Deion Barnes didn't have zero. He actually had a great game. And I know Obeng got credit for that forced fumble - but I'd at least split that credit with brand new DT Brian Gaia, who stuffed the point of attack, shed his blocker, and put his helmet on the ball.