Penn State wrestling manhandles Purdue, just like they should. 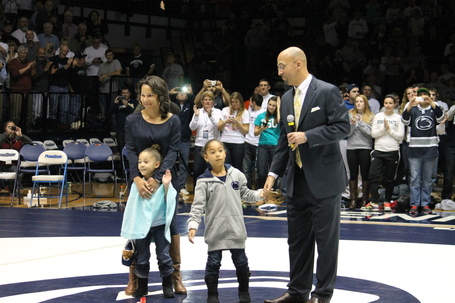 Of course, the James Franklin introduction tour stopped at Rec Hall ,where he took a moment during the break to address the crowd with his wife and two daughters.  I'll say this much: the guy is already a rock star to Penn Staters--lots of people made their way to the VIP section, where Franklin sat to shake his hand and get their pictures taken with the new coach.  If Franklin has half the energy his two daughters had he'll be one hell of an active football coach.

Back to the actual wrestling: I keep looking at the final score and I know it was a blowout, but for some reason it just felt like Penn State left some points on the mat.  Five of the 10 bouts ended in bonus, but for some reason I have a gut feeling that the Lions didn't wrestle their best.  Maybe I'm spoiled, but it just feels that way. 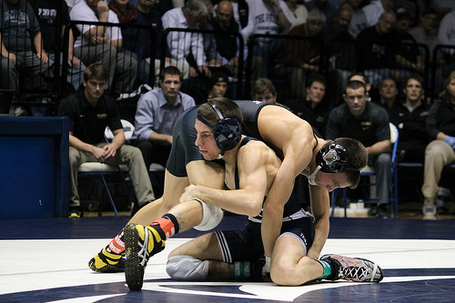 Megaludis scored three early takedowns in the first period and cruised to a 15-4 major. Nico pushed the pace, managed a stall point, and built up over 3 minutes of riding time. Megaludis tried for a tilt and back points but Eppert managed to fight him off. 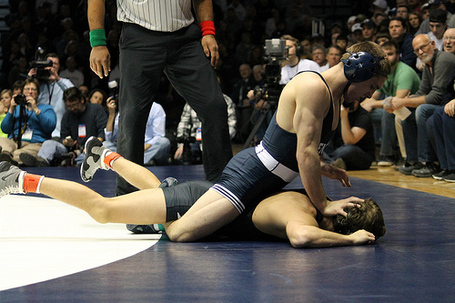 Retherford scored takedowns late in both the 1st and 2nd periods to take a 4-1 lead to the third. Zain added an escape to start the third and pushed the action to get two more takedowns.  With his effort and a riding time point, Retherford was able to secure the 10-2 major. 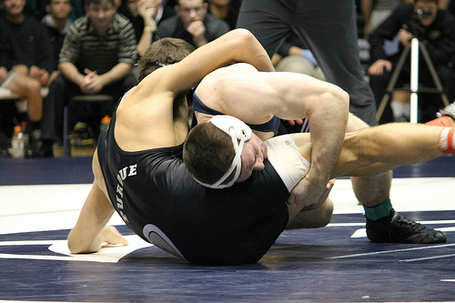 Matt Brown used two first period takedowns and a strong ride to take a 4-1 lead into the second.  He quickly escaped and used a slick high double to take a 7-1 lead with over 2 minutes of riding time advantage.  Brown added 3 more takedowns in the third and with the riding time point won a decisive 14-4 major. 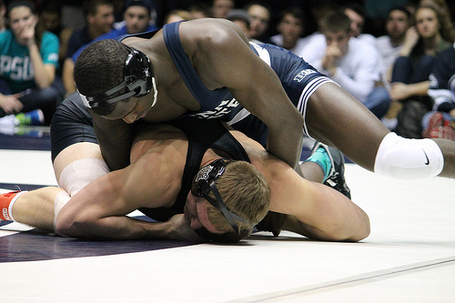 Ed Ruth, now number 2 in the nation, used 5 takedowns and a strong ride to beat Tanner Lynde 13-3 for the team's forth major decision.  Ruth pushed the action on top and managed two stall calls for a stalling point.  Ruth accumulated over 3 minutes of riding time advantage. 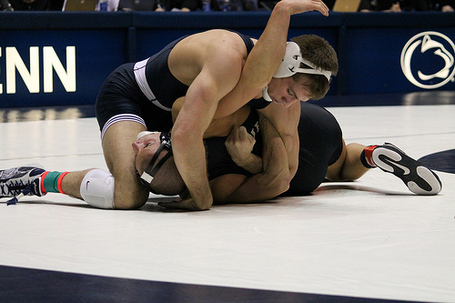 David Taylor's assault on the Penn State record books continues.  Taylor scored 3 takedowns in the first period and caught Chad Welch on his back for his 47th career pin.  There are only 4 more opportunities to see David Taylor in person; I suggest you do so because you aren't going to see a wrestler like him for a while. 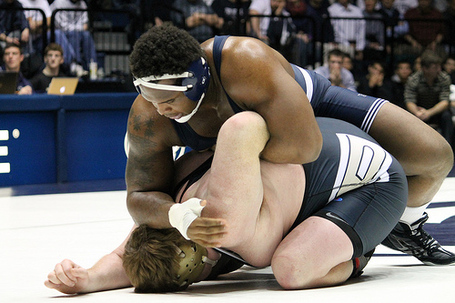 Jimmy Lawson put together a good match and fell just 1 point from a major.  Lawson converted a strong double leg takedown in the first and rode out the period.  He clinched the riding time point by riding White for the entire second period. Jimmy escaped to start the third but wasn't able to get the three takedowns necessary to get the major, finishing 8-1. 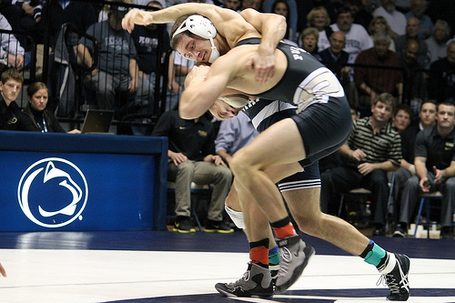 Welcome back, Altons!  Andrew started out on fire, countering two Nelson shots and converting them to takedowns of his own to take an early 4-1 lead--and that's when things went south for A Alton.  Andrew started the 3rd on bottom and Nelson forced a stall call and an injury.  Because of the injury time out,  Andrew was forced to take top and managed to ride Nelson out but not before he got dinged for stalling two more times.  Andrew was able to hold on and win a 7-6 decision with a riding time point but it wasn't pretty.  Dylan looked much better getting two takedowns and almost 3 minutes of riding time in his 6-1 win. 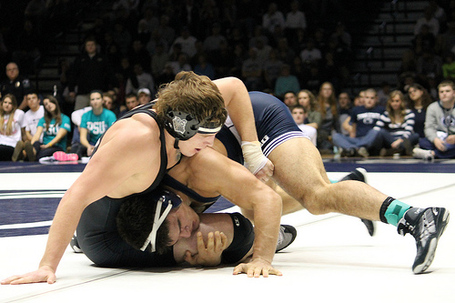 The only match-up of ranked wrestlers didn't go Purdue's way as #8 McIntosh bested #16 Branden Atwood.  McIntosh got 2 1st period takedowns and a 2nd period takedown to take a 6-3 lead.  The bad news: Morgan got rode for the entire 3rd period, including a stall call, so there's plenty of work left to be done.

Just when you think you have Jimmy Gulibon figured out, he loses a bad 9-2 decision.  Granted, Cashe Quiroga is an All-American and is a good wrestler, but Gulibon got manhandled.  Quiroga had a 8-0 lead before Gulibon finally connected for a takedown in the 3rd but it was too little too late.  After his 2nd place finish in the Southern Scuffle, I thought Gulibon had finally turned the corner; now I'm not so sure.  I still think he can wrestle with the best of them at 133 but how deep he goes in Nationals is still a mystery.

It's hard to argue with a 34-3, one-sided victory but I think there could have been more.  I'm glad Andrew had to go the full 7 minutes we got to see his conditioning and he seems good to go.  The close score is a bit worrisome but we'll chalk that up to his first action in front of the home crowd.  McIntosh has to work on his bottom position there are better riders in the country than Atwood, but he showed good quickness on his feet.

Next Up: Friday Jan. 17th at Indiana