What started out as a nail-biter ended well for the men in Blue and White as Penn State closed out the final 3 weight classes in style to turn a 9-12 deficit into a 23-12 win.  Ed Ruth gave Penn State some breathing room with a 3rd period pin, and Morgan McIntosh and Jon Gingrich closed the dual with 2 straight major decisions.  Penn State, yet again, dominated the takedowns--running up a 20-7 advantage.  The Lions also minimized the damage, losing only by decision at weights they were out-manned while posting bonus points where they had the advantage. 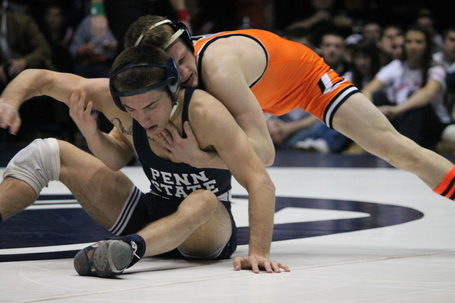 The bout started out precariously as Nico fell behind by a 4-1 deficit after the first period.  Kilmara countered a Nico shot and got the first takedown at the edge of the mat.  After a quick Megaludis escape, Kilmara scored again and rode out the period.  Kilmara chose down to start the second and escaped to a 5-1 lead.  But Nico didn't panic and kept his offense up, finally scoring on a low shot with 1:10 left in the 2nd.  Nico cut Kilmara loose and scored again to close the lead to 7-5.  Megatron repeated the process and tied the match at 7 with 30 seconds to go and rode the period out.  Nico chose down, quickly escaped for his first lead 8-7 and forced a stall warning with constant pressure.  Megaludis then connected on a high single with just under a minute left and rode Kilmara out for a 11-7 win.

Jimmy is closing the gap between him and the top talent at 133.  This was a rematch of the Southern Scuffle which (then top-ranked) Morrison won 4-0.  Morrison got the bout's only points on a first period takedown.  Morrison rode the period out after the takedown building up over a minute of riding time.  Gulibon returned the favor and rode Morrison for the entire 2nd period to erase the riding time advantage.  Gulibon chose neutral to start the 3rd and pushed the action but could only manage a stall call as time was running out.  It's a tough loss for Gulibon but he's getting better as the year moves on. 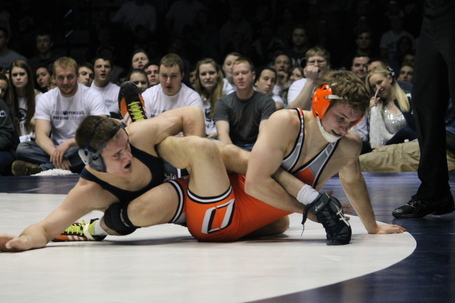 Retherford and Collica had some serious scrambles but none of them ended in points.  Again, apparently no one watches film of Zain as Collica chose bottom to start the 2nd and Retherford rode him for the entire period.  The third saw more wild scrambles, none of which ended in points, and Zain walked away with a tough 2-0 win on the back of the riding time and a 3rd period escape.

Like fellow redshirt freshman Gulibon, Zack Beitz is getting better with experience and one thing is for sure, Zack Beitz will give you a full 7 minutes.  Beitz pushed the action in the first but never really came close to getting a takedown and the period ended with neither wrestler scoring.  Beitz scored first on an escape but Kindig got a takedown off a counter shot to take a 2-2 lead after a Beitz escape.  The period ended and Kindig chose bottom and quickly escaped to a 3-2 lead.  Beitz kept the pressure on and forced a stall call with 1:20 left but Kindig countered a Beitz shot for the final takedown and the 5-3 lead after a Beitz escape. 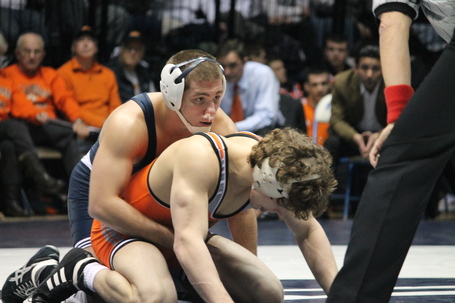 It was a rough day for Dylan Alton (Photo:BSD/Galen)

For the second week in a row, Dylan Alton gave up a big move while getting thrown on his back.  Alton scored first on a strong double leg takedown but Dieringer escaped and caught Alton for a 4-point move to take a 5-3 lead after one. Dieringer chose down to start the 2nd and quickly escaped to a 6-3 lead. The match had to be stopped several times due to blood from Alton's nose.  There was no further scoring and the match moved to the final period.  Alton chose down and escaped to put the score at 6-4.  Alton and Dieringer traded shots but Dylan was the aggressor and force a stall call as the period was winding down. Unfortunately, Alton could not break through to tie the match and the 4-point move was the difference in the bout.

Don't look now, but David Taylor didn't get bonus points for the first time this season!  Actually, there may be a chink in the armor for the magic man; Tyler Caldwell was able to ride Taylor for the entire 3rd period and that's the 2nd straight match that Taylor has had trouble getting out from bottom.  Of course, any criticism of David Taylor comes with a caveat; he's set the bar so freaking high for himself that I'm complaining about a 5-2 win over the 5th-ranked wrestler in the country.  Come tournament time, I highly doubt any of these "problems" will stop him from winning his 2nd national championship. 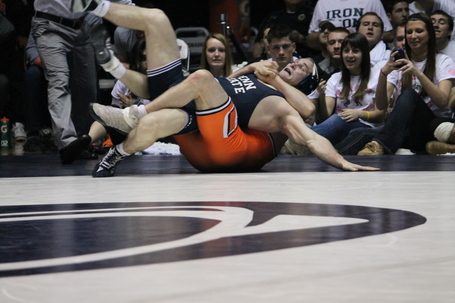 This is apparently a takedown (Photo: BSD/Galen)

Matt Brown is sooooo close to Chris Perry.  Brown shot early and nearly had the takedown but as Perry countered Brown arched his back into Perry and appeared to have him flat on his back at the edge of the mat.  Not only did Brown not get the call, but the official awarded Perry with the 2-point takedown.  Brown escaped and forced the action, taking shot after shot, but was unable to finish and went into the 2nd down 2-1.  Brown chose down and escaped but not before Perry built up over a minute of riding time advantage.  Brown forced the action and eventually got two stall calls and the lead 3-2 at the end of 2.  Perry chose down and Brown was able to hold him down long enough to erase the riding time point but regulation ended in a 3-3 tie after a Perry escape.  In the first sudden victory period, Brown was the aggressor but could not finish.  In the first tie breaker period both wrestlers held the other down for the full 30 seconds and the bout moved to the 2nd sudden victory.  Perry had a good shot and nearly scored but Brown countered and nearly scored himself.  Neither connected and Brown had down for the 2nd tie-breaker.  Brown was unable to escape and Perry quickly escaped to take the lead in his round of the tie-breaker.  The bout ended as Brown got in deep but once again could not finish and lost in the 2nd tie-breaker.  It's a tough loss, but if Brown could finish 1 or 2 of his shots it might be the difference if they meet in nationals.

With Oklahoma State taking a 3-point lead with the Perry victory, it was imperative that Ed Ruth score big points on unranked Nolan Boyd.  Ruth didn't disappoint as he quickly scored the takedown and locked up the cradle early in the 1st.  Boyd fought off the move and escaped to a 2-1 deficit.  Ruth scored again, locked up the cradle yet again but could not turn Boyd for the pin.  Boyd escaped again and the lead was 4-2 with 30 seconds left. Ruth scored another takedown and locked up another cradle but this time was able to get 2 backpoints as the period came to an end.  Boyd chose down to start the 2nd and Ruth locked up another cradle (am I sounding like a broken record yet) but was unable to finish and Boyd got another escape with 30 seconds left. Ruth scored a late takedown to take a 10-4 lead into the 3rd. Ruth chose down to start the 3rd period and quickly reversed Boyd.  Ruth then locked up another cradle (that's 5 for those counting at home), but this time decked Boyd at the 5:41 mark to give Penn State a little breathing room. 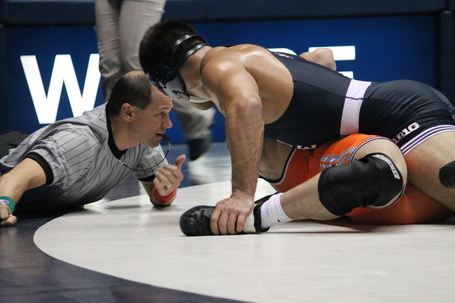 Penn State's most consistent wrestler of late has been Morgan McIntosh, and a major decision win would put the dual out of reach.  McIntosh wasted little time getting a quick takedown and pushing the action.  He managed to force Crutchmer into to two stall calls an took a 3-1 lead into the 2nd. McIntosh nearly reversed Crutchmer but got the escape and quickly worked into another strong takedown. McIntosh then turned Crutchmer, nearly getting the pin, but settled for 3 backpoints. McIntosh turned him again for 3 more nearfall and took a 12-1 lead into the final period. Crutchmer escaped but McIntosh forced another stall and finished off another takedown and added a riding time point to end with a major and effectively end the meet. 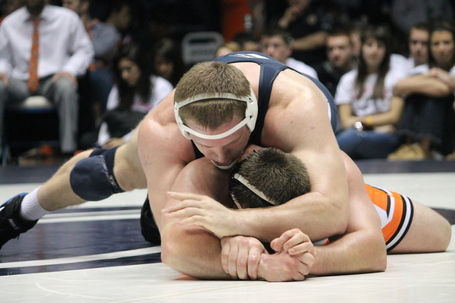 The big guy gets some BSD love (Photo:BSD/Galen)

With the meet all but finished, Jon Gingrich took the mat to take on unranked Ethan Driver.  Jon wasted little time and scored just 20 seconds in.  Gingrich built up over a minute of riding time before a Driver escape.  Driver shot in but Gingrich countered for a takedown and 4-1 lead after 1.  Driver chose down and escaped but not before Gingrich had over 2 minutes of riding time advantage. Gingrich scored two more takedowns before the period ended and had a 8-3 lead to start the 3rd.  Jon chose down and quickly escaped and tacked on another takedown.  Gingrich added another 3rd period takedown and a riding time point to close out the dual with a 14-5 major decision.

Horrible officiating aside*, this was an entertaining, hard-fought dual. Both sides had chances for upsets but the rankings held true.  The dual was in question for quite some time but the good guys finished things off at the back end of their lineup.  What's next for Penn State, you ask?  They close out the dual season against Clarion, the team Oklahoma State just got done beating 45-0.  That's not going to be pretty.

*I'm done complaining about the officials, they suck, we know it, the best we can hope for is that the NCAAs only use the top, most experienced guys from the official pool.

2/18/2014 Update: my picture slideshow was missing about 2/3 of my photos.  I've updated it and reloaded, I'm still getting the hang of this Flickr thing.  They all should be there now.