Let me preface this by saying that I truly, truly do miss Rob Bolden. We'll never actually know if he was just ill-suited for the college game or if he was another Jay Paterno special, but Rob Bolden will always have a place in my sports heart. He started his first game as a freshman when I was attending my first ever Penn State football game, so I like to think we grew up together in that way. While we are certainly spoiled now with Christian Hackenberg redefining what we knew about freshman quarterbacks, Rob really wasn't all that bad in his season-long audition. Aside from the abortion of a homecoming performance against Illinois (which was really the whole team, not just him), he performed valiantly. Then he was knocked out of the Minnesota game with a concussion and the rest of history fell into place. Arguments were made, 1's were held in the air, feelings were hurt, Curtis Drake attacked, but in the end Rob Bolden had no place at Penn State. In my mind, part of that will always be because he didn't get a chance to show his athleticism. Well now I will finally know if I was right or wrong.

OH MY GOD YES "@BarrettSallee: Rob Bolden at WR for LSU? Likely Brandon Harris vs. Anthony Jennings at QB, so why not give it a shot?"

[spits out drink] RT @BarrettSallee: Rob Bolden at WR for LSU? Likely Brandon Harris vs. Anthony Jennings at QB, so why not give it a shot?

Rob Bolden playing WR in the SEC is probably the single greatest piece of news I'll hear this off season.

Needless to say I was ecstatic at this news. I want nothing more than to see Rob Bolden become a superstar SEC wide receiver. Now, I am not an idiot. I'm not actually going to go around saying that a 5th year senior who has failed at quarterback for four of those years, is going to magically morph into a standout LSU receiver at age 22. I will say though, that he might not be a complete disaster.

All in all, I might just be trying to convince myself that he'll be anything more maybe a special teams player or an emergency backup. However, I think we all deserve to live in a world where Rob Bolden is relevant for a football team again, because things are just so much more enjoyable that way. I would love nothing more than to see the man who once made me write the following poem...

Rob Bolden, who art at LSU,

Cursed be thy Name.

Thy were made the starter.

Joe probably thought you were smarter,

But really, you were just truly dumb.

Give us this day our innocence back.

So that we can trust freshmen,

And freshmen can once again be talented enough to trust.

You led us not to victory,

For thine is the inconsistency,

And the unfulfilled potential.

For ever, and ever.

...turn around and make me as happy about his existence as this twitter conversation did. 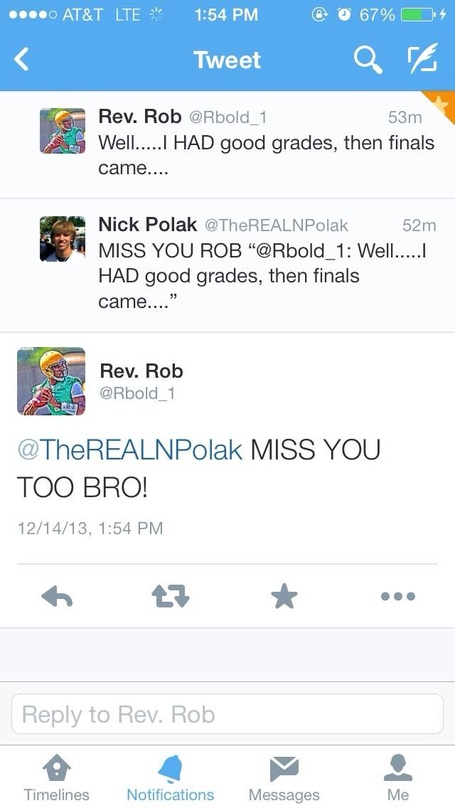 So I hope you'll join me in rooting on Bolden to become at least a useful wide receiver this season for the Tigers. Or if you just want to watch to see if he's terrible, that's cool too. Probably a good chance he gets drilled running over the middle once or twice if he actually plays, and who doesn't love that?

I'm not sure how often And The Valley Shook! talks about Rob Bolden, but I'm guessing it's not enough. You should check there from time to time anyway though, on the off chance that they do decide to focus on their most electrifying player since JaMarcus Russell.