Not creepy at all

Yahoo Sports has a new segment called "Random offseason tweet of the day" and our very own James Franklin was the subject of yesterday's post tweeting this picture: 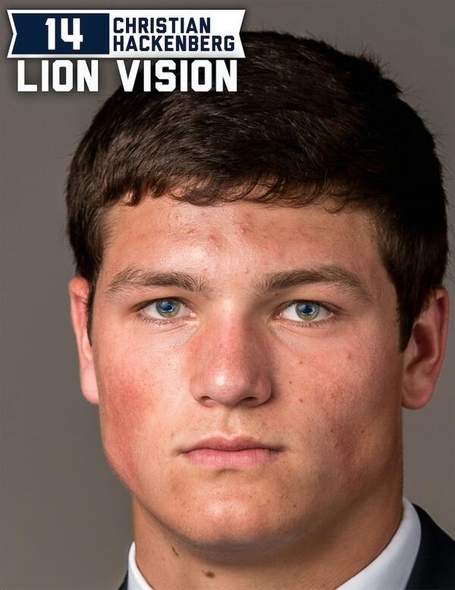 For those of you that are not so observant, Franklin Photoshoped the Lion logos in Hack's eyes.  Dr. Saturday had this to say:

I get that sophomore quarterback Christian Hackenberg is the face of the program and everything, but even though the Nittany Lion logos in the eyes thing is pretty cool, this might be a little too up close and personal.

Do you think this is creepy or cool?  Let us know in the comments.

With most of the current players having played for at least 2 and some 3 different head coaches you can imagine that trust is an issue. Coach Franklin recognizes that and is trying to build a foundation.

Along with the players trust he's also trying to keep his promises, that includes singing 'Happy Birthday' to a 90-year-old grandparent.

Franklin was a keynote speaker at a banquet for high school seniors lauded for their athletic and academic performance(emphasis mine).

Finally, if you are a Nittany Lion Alumni or Nittany Lion Club member you can register before the public to see one of the stops of the Coaches Caravan beginning in May. Here's your info.

In scores of other games

The Lady Lions are ready to take on Florida tonight. The Penn State Hockey team is eager for next season and feel they've made great improvements from the beginning of the season. The Lacrosse team find themselves ranked in the coaches (17) and the media (20) polls. While the Penn State Wrestling team were winning their 4th straight championship the Fencing team was winning it's 13th overall.

Lastly, the greatest story to come from the Wrestling team's championship was not of Ed Ruth winning a PSU record 3 national titles, or David Taylor's dominant year but it was the perseverance of 6th year senior James English on his way to a 7th place All-American finish.  You think you have it tough listen to what English endured (skip to 8:40) James English is truly my new hero: