On Monday the Big Ten released its pre-seeds for the second best wrestling tournament in the US, the Big Ten Championships. On Friday night, the 12 Big Ten coaches will haggle a bit to finalize seeds, and then they'll wrestle it all out on the mats, from Saturday morning thru Sunday night.

Let's take a look at each of the 10 weights, where our Penn Stater stands, and how the tournament might shake out overall. Please note, the seeds we use below are still unofficial, of course; and, it's equally important to note, the Big Ten will only seed 8 or 12 wrestlers, depending upon the number of qualifying bids earned. Any un-seeded wrestlers are placed into brackets randomly. At 125 lbs, for example, the Big Ten earned 7 qualifying bids; they'll seed the top 8 wrestlers, and numbers 9 thru 12 will be placed into the bracket at random. We show 1-seed Nico with a first round BYE, but he could end up with a match.

For top guys, like David Taylor and Tony Ramos, that's a pretty minor point, since they're almost guaranteed to crush whomever they might draw in a random first round match. However, it becomes critical to the team race overall. If Taylor lands the worst Big Ten wrestler in the first round and wins by pinfall (which would be the likely outcome), that's 2 more bonus points accrued for his team than if he had received a BYE in the first round. Something to watch when the official brackets are released Friday evening. 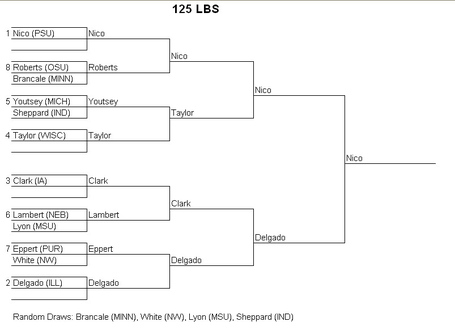 Our Guy: Nico Megaludis likely keeps the #1 seed, thanks to an unblemished conference dual record, and an equally spotless record against all Big Ten foes this season.

The Story: first, I allow myself one total PSU homer pick, and like usual, Nico gets it. Love his toughness, love the way he wrestles, and I'm giving him his first Big Ten title.

But with that out of the way, the storyline here at 125 lbs lies with the bottom half of the bracket. Who does Tom Brands run out on the mat? Thomas Gilman won Midlands, beating returning National Champion Jesse Delgado there, and held the Hawks' spot in the lineup for all of January. Then Gilman got stuck by Minnesota's Sam Brancale, and gave way to Cory Clark in February. It was Gilman who earned the bid for the conference at this weight. But it's Clark who is listed with the #3 pre-seed. We think that it's Clark who wrestles Saturday. He's likely to have a big showdown in the semi-finals with Delgado, which will be a key match with respect to the team title race. 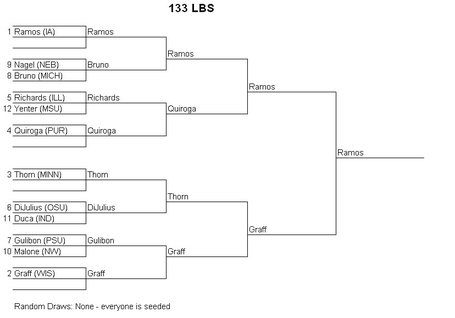 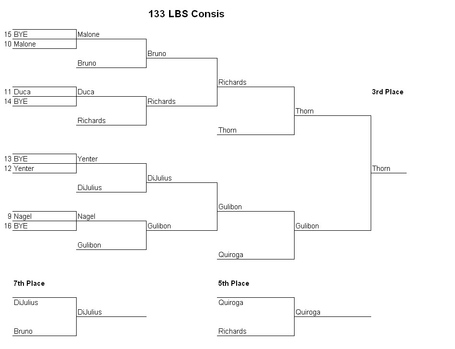 Our Guy: Jimmy Gulibon, with his runner-up finish at the Southern Scuffle (and 4 PIAA golds), looks like he's a tournament wrestler rather than a dual meet wrestler - at least this season. That bodes well for Penn State, if it proves true. Consequently, we confidently pick Gulibon to take out OSU's Johnni DiJulius in the consolations. You may remember that DiJulius beat Gulibon in a dual meet, 3-2. You may not remember that it was Gulibon who scored the only takedown, and that DiJulius won on the back of 2 escapes and a riding time point.

The Story: get ready for fireworks in this bracket. Ramos and Graff are a cut above everyone else here, and are favorites to make the final (which should be an epic battle, by the way). But after those two, there isn't much separating #3 David Thorn thru #7 Jimmy Gulibon. You can arrange those four wrestlers in just about any order you like, and I'd have a hard time arguing with you. 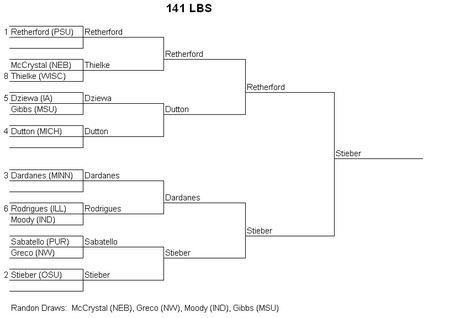 Our Guy: what a season from Zpain. That he's a true frosh certainly makes it sweeter, but anytime you finish the Big Ten regular season undefeated, it's pretty special. He takes the 1-seed over 2x NCAA Champ Logan Stieber.

The Story: here's your crazy season in a nutshell. A true frosh beats a 2x Champ. A two-time All-American (Dardanes) gets the 3-seed (for now - I thought he'd end up 5th). The Midlands runner-up (Rodrigues) didn't earn a qualifying bid for his conference, and is seeded 6th. And there are only 6 auto bids up for grabs, even though 9 of the 12 wrestlers have been ranked in the top 20 at one point or another this year. Cats and dogs living together...mass hysteria. 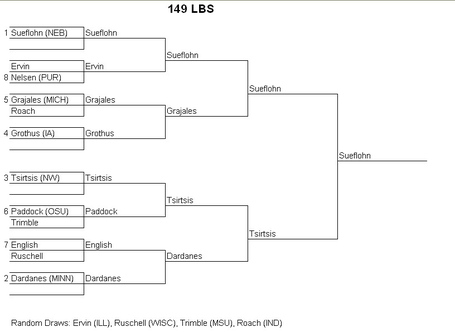 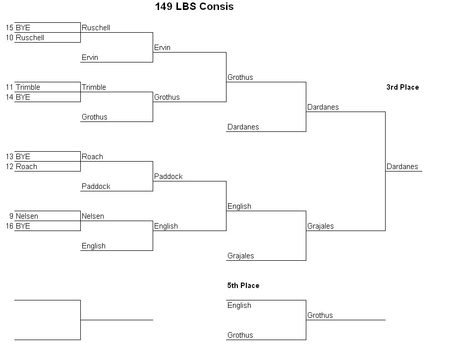 Our Guy: say hello to Jim English, the 6th-year graduate student and former walk-on from Central York. College wrestling is hard, hard work. English, while earning his Chem E undergrad degree, had to have taken some serious beatings in the Penn State room - for 3 or 4 years. For his first 60 months, the guy never got more than spot starts. He overcame all of that, plus a serious shoulder injury, plus other injuries, plus top recruits, plus the sheer agony of it all, to persevere. What a a freaking story. Now, Jim must place top 6 at Big Tens for this to have a reasonably happy ending. He begins with the 7-seed.

The Story: it's Jim English, for us. But broadening our perspective a bit, it's also Iowa's Brody Grothus. After winning just one Big Ten tournament match in the last two seasons at 149 lbs, the Hawks have legitimate hopes of not only qualifying this weight for Nationals, but of actually making some noise. Grothus began the year as the backup to Mike Kelly. He got majored 13-5 by Edinboro's David Habat in December, and then he wrestled lights out in January, earning wins over Habat, Josh Kindig, Grajales, and Tsirtsis. He's come back down to Earth in February, losing 3 of his last 5 (though, those 3 were to Sueflohn, Tsirtsis, and Dardanes - the top 3 seeds here). It's not inconceivable that Grothus could make the final. Nor is it inconceivable that he squares the 6th and final qualifying bid. 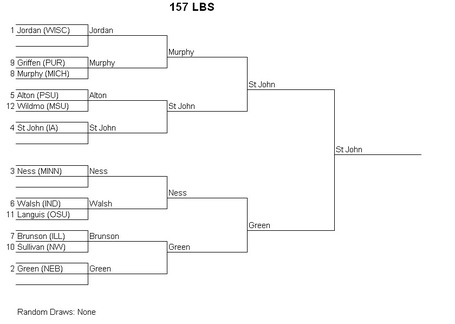 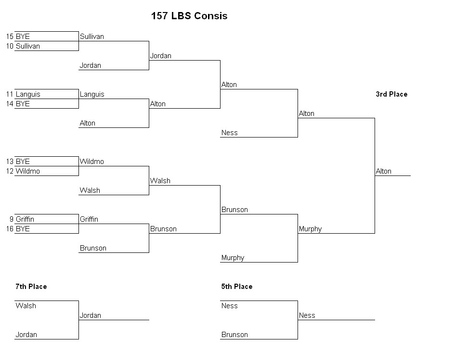 Our Guy: Dylan Alton has performed just about as well as you could hope for while returning from shoulder surgery this off season. Still, at Big Tens this year, two losses on the year is only enough to land the 5-seed.

The Story: this weight class is an absolute meat grinder. That's the story: Meat. Grinder. The defending national champ at this weight, Iowa's Derek St. John, gets the 4-seed, and he wasn't wrestling injured, either. The 2-seed is trying to impersonate his training partner, 3x World Champ Jordan Burroughs. The 6-seed Walsh was among the nation's leaders in pinfalls, and finished 5th in the NCAA's "most dominant" rankings for the regular season. Yes - the 5th "most dominant" of all wrestlers in all weights, is the 6-seed at his conference tournament. Even the 7th and 8th seeds have been ranked in the top 10 at points this year. Place top 3 in this tournament, and you've earned it. 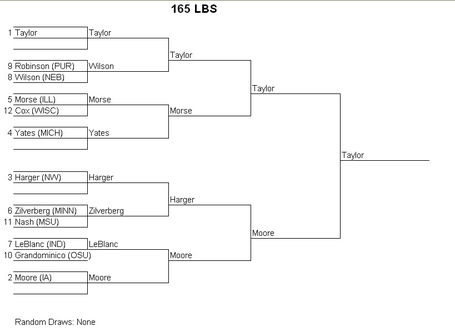 Our Guy: the Magic Man, David Taylor, who is currently undefeated in his career against all Big Ten opponents, and can count on a single hand the number of matches in which he has NOT bonuses his Big Ten foe.

The Story: enjoy it while it lasts, friends. Because we may not see its like again (after 184, I mean). 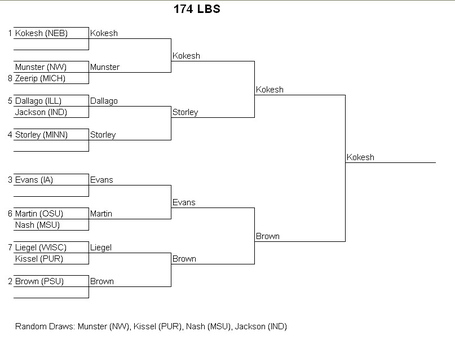 Our Guy: good ol' Hulk Hands. Who wants to wrestle a guy that is going to pull on your head until it pops off? No one, that's who.

The Story: the top 4 here - Kokesh, Brown, Evans, and Storley - are just about certifiable to make the semis. But after that it's just about anyone's game. Just about. Kokesh and Brown get the nod from us, because they've proven they can shoot and score with more consistency than Evans and Storley. But it should be a heckuva show. 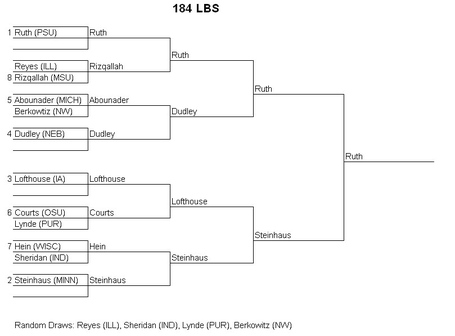 Our Guy: Ed Ruth, So Fresh, So Clean. Like Taylor, Ed has defeated every Big Ten wrestler that took the mat against him in the past 4 years. Like Taylor, Ed can count on a single hand the number of Big Ten matches in which he has NOT bonused his opponent.

The Story: having one on your team is incredible. Having two in the same class, all four years, has been indescribable.

Oh yeah - there's a big semi-final showdown in the bottom half of the bracket, between Lofthouse and Steinhaus, for the team race. 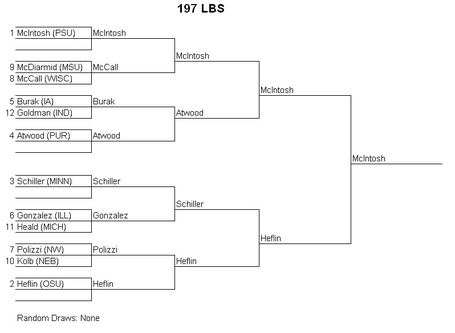 Our Guy: it's one thing to be a top-rated recruit. It's another thing to live on the opposite side of the country from your home and family. And it's yet another thing to deliver the goods despite all obstacles and injuries. Sophomore Morgan McIntosh has, to this point in the season, delivered as advertised. We expect that continues at Big Tens.

The Story: this weight class returned just 1 All-American from last year's 197lb class - Scott Schiller. He's the 3-seed, and he's recently hit a rough patch. Morgan, Heflin, and Schiller are probably a notch above the rest in this weight. But almost everyone is dangerous. The proof in that statement is 8-seed Timmy McCall's win over 2-seed Nick Heflin, and former 197-lb Champ Mario Gonzalez sitting at the 6-seed. Anything can happen at Big Tens, and it just might in this weight. 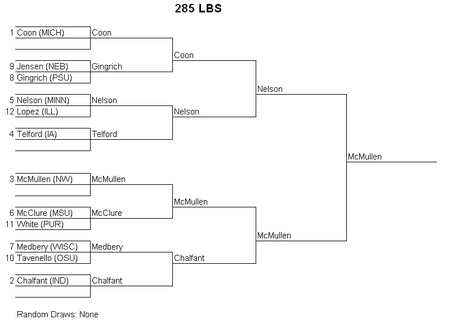 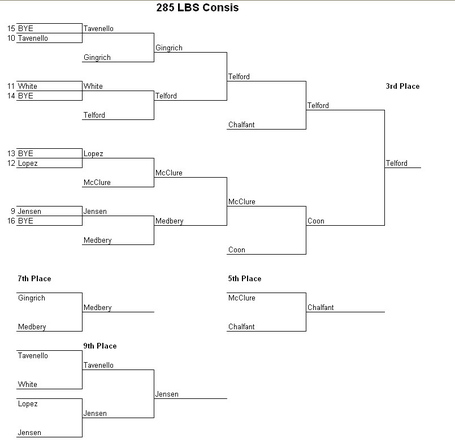 Our Guy: congratulations, Jon Gingrich, for earning the nod here. Now, big fella, it's time to unleash that blast double.

The Story: Nuts. The story is, holy crap. In our projected consolation semi-finals, all four guys are ranked in the national top 10. The guys in our projected 7th/8th place match are both national top 15. So.....there's some depth in this weight class. No one gets an easy road to the final.

The other notable story here - Iowa, Minnesota, and Penn State are all in the top half of the bracket, and none are the high seed on that side. Early fireworks could throw the team race for a loop.

Using those estimates for each placement and applying them against the pre-seeds, we get the following team projections:

But anything can happen at the Big Ten tournament. Using our predictions (read: wild guessing), the order is the same, though all top 3 contenders perform better than their pre-seeds in total. Should be a wild one.