The mailbag is back, y'all! And starting off with...PUNTING!

Do we have a punter? I don’t recall seeing a decent punt in the game, but that could be my selective memory working against me.--87Townie

Chris Gulla was the punter for both squads, so I think it's safe to say we have A punter. According to the official stats of the Blue/White game, Gulla had twelve punts on the day for 470 yards, which is an average of 39.16 YPP; his longest of the day was a 50-yarder. That's about the same as Alex Butterworth's stats from last year; Butterworth had 51 punts on the year for 2000 yards, averaging 39.22 YPP.

I tried to find an overall average for NCAA in 2013 but couldn't come up with one; Butterworth was ranked 109 of 121 punters in the NCAA last year. So that's probably not such a great thing.

What's the over/under for carefrontations to make room for Juco OL’s? (Personally, I’m going with 5)--PSUinOH

Do you mean for the 2014 season? Because I think that ship has basically sailed--most JuCo guys are already enrolled (their signing day is actually in late November), and I actually think that depth will be better after 2014--because by my calculations, we're not going to be losing a lot of guys after this year (especially with Alosi and Dieff out). We'll have more experience and depth, so carefrontations won't be as necessary--and the incoming recruits will have a year to have bulked up and bought into Franklin's system. I think it'll be only one or two, maximum.

With apparent lack of depth on the o-line, d-line and LBs, there’s a pretty good chance we will have a mediocre season. If that occurs, say a 6-6 record, will that curtail a lot of the positive momentum Franklin has brought?--psualum9931

Is 8-4 a reasonable prediction for this year? Originally, I thought so; the schedule is easy enough. However, we have a serious problem with the offensive line this year so maybe 6-6????--jiminore

These two questions aren't exactly the same, but they're on the same vein, so I'm combining my answer.

Regarding 9931's question, after the BW game I'm much less concerned about d-line and LB depth. I think we'll be very okay at both of those positions, since I didn't see much time from MIke Hull, and none of Nyeem Wartman or Ben Kline--plus we have Troy Reeder coming in. D-Line is a strength now that we have the interior locked down (Anthony Zettel's half shirt FTW)--and Franklin apparently agrees. O-Line, though, will be a problem, and how the offensive line goes, so will go our season.

I've long felt that 8-4 was reasonable given the schedule. Because of the O-line, 7-5 might be a bit more realistic. Either way, though, even if we drop to 6-6--I don't think that will impact the positive momentum of Franklin. There's hype around the program, and he's definitely a salesman. I think he can spin it as rebuilding; and the key year will be the 2015 season--if he doesn't do better in that year, then we'll see a drop off. But this year, I think Franklin's good either way.

I’m not sure if the O-Line is actually a sieve or if the D-Line will be awesome this year. It was hard to gauge. However, there were a lot of "sacks" registered.

The other area that was tough to figure is if all the picks were due to QB hurries/bad decisions or if we have a ball-hawking secondary (be still my heart).--87Townie

I think I responded in another comment thread, but I believe it will be a combination of both. Typically, when the Penn State defense has an uncharacteristic "down" year (like last year), the next year we've rebounded well; 2010 vs. 2011 comes to mind. The defense will, in my opinion, be a strength of the team this coming year--and we'll need it because of the offensive line.

We've never really had a "ball-hawking secondary" and with the fourth defensive coordinator in four years, I'm not sure if we will this year; but secondary will be a definite strength for us, and I think we'll see more turnovers this year than last. Teams will still throw away from Adrian Amos' general direction, as they've done for the past two years, but Jordan Lucas has gained valuable experience and will parlay that, and we have increased depth at all positions. Ryan Keiser has surprisingly turned into almost the most hawkish in the secondary, if he lands one of the other starting spots.

I think most would agree that James Franklin is killing it recruiting and over the long haul PSU FUTBAW will be in better hands than with BOB. I would like to know your thoughts on 2014. Will the team we see on the field this year have a better record being led by Franklin or by BOB if he stayed?--PSUinOH

I think it would have been better under O'Brien, just because the players are having to learn an entirely new playbook. Plus, the aforementioned fourth D Coordinator in four years--that's never a good thing. If BOB was here, I saw 8 wins easy. Now that would be difficult, but it's still doable.

On a scale of 1-10, how much would you want to hang out with the current staff? O'Brien's staff?--Dbridi

OK, so seriously it's not even close--I don't think there's more thanone person on O'Brien's staff I would have wanted to hang out with. So O'Brien's staff gets a 4 from me (and it's only a 4 because they were the PSU coaching staff, and Craig Fitzgerald (at a resounding 10) brought the average way up.

For Franklin's staff, I don't think it's really fair to give all the coaches numbers so I won't do that. But overall, I think I'm at a seven or eight (honeymoon period) with the coaches I really want to hang out with being Herb Hand, Sean Spencer, and Brent Pry. And Franklin himself.

Why don't you have a Kickstarter reward tier for people who absolutely do not want either the magazine or the shirt? You’re leaving money on the table!--WorldBFat

In seriousness, you really don't have to download the magazine if you donate, so no one's holding you to anything. And if we make our kickstarter goal, and you don't want to give us your credit card info or go through Amazon, you can contact Jared, Mike, Seth or I offthread, and we can accept just donation checks, with no incentive attached. That's provided, of course, that we meet our initial goal and we make a magazine anyway.

On a scale from "Maryland wins the 2015 BCS National Championship" to "Ohio State Sucks", how likely is it that you spent the blue & white game imagining this very scenario? 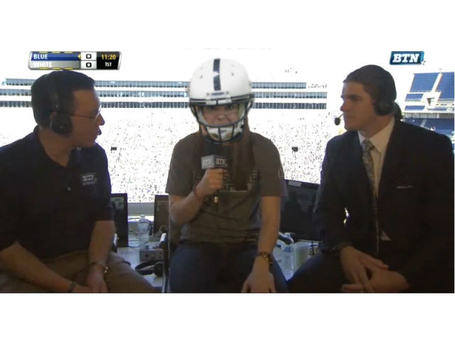 I have no response to this, it's just my favorite comment in the history of forever.

Bo Pelini with the cat: Sense of humor, or just cause for revoking his man card?--bveo12

I think it's absolutely hilarious. For a guy who is notoriously hotheaded, and had had run-ins with the Husker community in part because of how some perceive the way he interacts with the fans and the general Nebraska public, I think it's a great PR stunt. This is the second year in a row that Nebraska has done something out of the ordinary at their spring game, and it's generated great publicity for them again.

If you were in the backseat of your parents car and flicking your kid brother's ear to make him yell, would his name be Rutgers or Maryland?--CvilleLion

I'm going to guess that he says Rutgers since, like me, he spent much of his youth in the state of Maryland and thus doesn't have the negative connotations with that name. But I'll provide an update in the comments.

Tailgate games. Why are there so many new ones? Or am I just old? I must have seen at least 4 I’ve never seen before. Frisbees hitting a pole that has a beer on top – just looks stupid.--SarcasmJam

I mean, I guess people play tailgate games. I personally don't, because I prefer talking and drinking and eating and hanging out with people, but if you're bored, whatever. Maybe I just tailgate with more awesome people?

Also, it's not a real tailgate game, but I'd have to pick beer pong over any other game I'd see at a tailgate. But there are far too many--if you need that much entertainment at a tailgate, you're doing it wrong.

Is there a BSDbonics dictionary in existence? And what words would need to be included that are staples of BSDbonics? A piece of literature that defines the frequently used terms of the Black Shoe Diaries and lets me know that to "porch" is to steal a recruit, "elite" means you have a scholarship offer from Va Tech, and the correct spelling of fire is "fiur". I await enlightenment--Dbridi

There's no dictionary, but the best overall resource was bscaff's BSD Meme Tourney from last summer. It won't get you all of the lingo (you'll have to stick around, ask questions, and you can pick it up!) but all of the links in the tournament will get you caught up on the history of the Black Shoe Diaries in jokes, old and new.

What do you think of a person who arrives late for a job interview? Should that knock them down a peg? (extenuating circumstances like a 30 car pile up are excluded)--psualum9931

Yes. Absolutely. I've been a manager in various capacities for the past 10 years, and a job interview is the first (and, if you're late, likely only) impression you have on a potential employer--and if you're late, that shows the employer that you don't take the prospect of working there very seriously.

As someone who tries to be on time or early to everything (it doesn't always work, but most of the time I am), little frustrates me more. Except maybe benching a running back who's on a hot streak.

Is the US Airways tweet today the closest the internet has ever come to breaking? Aside from IT?--PSU12

Honestly, I had no idea what this was before reading this question, and googling what you were referring to. So I'm going to go with no.

Is it a pain to sort through the tangents and find questions?--Ben16

Not really--I can't speak for Jared, but I tend to read through the thread multiple times before I compile the post, so I have a general idea of what questions I'm going to be answering in advance.

Plus, it wouldn't be BSD without the tangents. It's what makes this place great.