With a new coaching staff comes a new defensive front, the 43 Under. Let's take a look.

Bob Shoop ran a base defense in the first two snaps of the Blue White game, and then blitzed on 10 of the next 20 plays.  Nice, right?  Bringing heat on half of your first quarter snaps isn't typical spring game material.  But it worked - Coach Franklin's offense scored just 3 points out of its six possessions.

What struck me - beyond the blitz percentage - were the defensive fronts Shoop deployed.  And though he used a good bit of the 43 Over, as advertised, Shoop also frequently went with its sister, the 43 Under.  Actually, the split between Over and Under was nearly 50% in the first quarter.  With kickoff in Ireland still 94 tortuous days away, let's take a look at both the 43 Over and 43 Under.

Below is all of that spaghetti in two pictures.  The top picture is Michigan at Penn State, circa 2010.  RichRod put a tight end on the left side, to the field, along with a tailback and two more wide receivers.   Penn State has true sophomore Jordan Hill filling in at weakside defensive end (top of the screen).  Ollie Ogbu is the 1-technique nose tackle.  Devon Still is your 3-technique DT to the strongside, with Pete Massaro as the wide 9-technique defensive end.  Our linebackers, from top to bottom (will, mike, sam), are Bani, Josh Hull, and Mike Mauti. 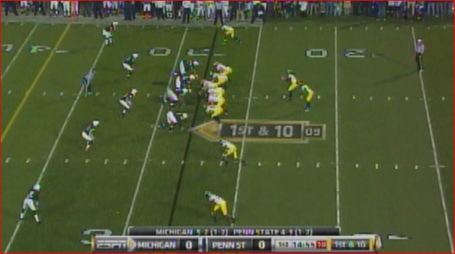 Everyone has a gap responsibility, as illustrated in the diagram below.  Of course, there are a ton of games a defensive coordinator can play that will change up the gap responsibilities we've drawn below (slants, twists, exchanges) - and, in fact, I probably should have swapped the DE/OLB responsibilities to both sides.  But whatever - the takeaway here is that the 43 Over is a "one-gap" front: each of the seven defenders is responsible for one gap. 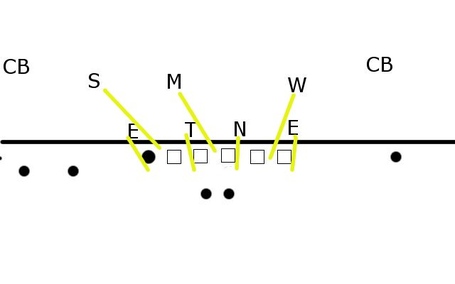 Who uses the 43 Over?  In addition to Tom Bradley circa 2000 - 2011, the greater portion of 43 defenses you see today are the Over variety.  Sparty's Pat Narduzzi is an Over disciple.  The Jimmy Johnson/Dennis Erickson Hurricanes ran the Over front in the 1980's.

Below is the 1st team (Blue) defense's first snap from the recent spring game.  They're in the 43 Under front.  How can you tell?  It actually has nothing to do with the strongside linebacker, #26 Brandon Bell, standing up on the end of the line of scrimmage.  The quick-and-easy "tell" to recognizing an Under vs. Over front is the positioning of the nose tackle.  In the Over, the nose is on the weakside of the formation (and, of course, the 3-tech DT is opposite).  In the Under, he's on the strongside.  Your Blue d-linemen in the shot below, from top to bottom (weakside to strongside) are: 7-tech DE Olaniyan; 3-tech DT Zettel; 1-tech NT Johnson; and 7-tech DE Barnes. 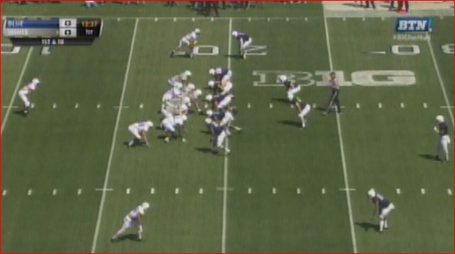 And below is what that defense looks like on the whiteboard.  Once again, you'll notice that the 43 Under is also a 1-gap defense: each of the front seven defenders is responsible for a gap, pre-snap. 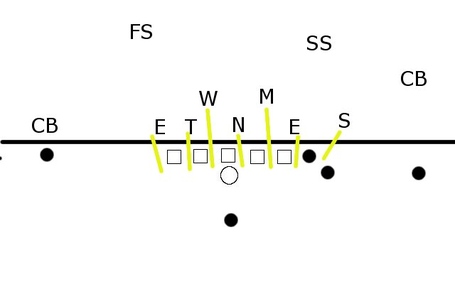 Who runs the 43 Under?  Monte Kiffen and Peter Carroll are famous for their Under defenses.

So what's the difference, other than the positioning of the two defensive tackles?  Not a ton, actually.  But there are a few key aspects that might make a coach tend to favor one over the other, depending upon the personnel he has at his disposal.

Quick programming note on those "prototype" names: all of those guys can line up wherever they want.

For a guy who came advertised as a predominantly Over front dude, Bob Shoop didn't waste any time adapting to his personnel.  He'll be heading to Ireland with the lightest 3-tech and smallest MIKE LB in the Big Ten, and, based on the Blue-White scrimmage, he's chosen to run some Under front to maximize what those two do well, while minimizing what they (presumably) don't do as well.  You've gotta like that, right?

Next film room - let's talk the mysterious Quarters coverage, because (contrary to what I wrote about Over/Under tendencies above), I think we should prepare to see a healthy dose of it.