The longtime Penn State target has finally made the call. And it's a good call.

Another key piece of #DominateTheState falls into place. 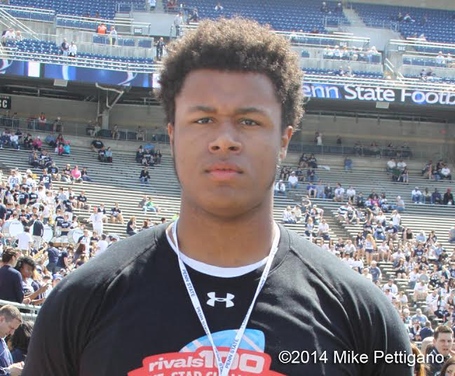 Stars: 4* across the board (247Composite #1 player in Pennsylvania)

You can also check out Sterling's tape on his Hudl page, right here.

Just announced my commitment to THE Penn State University!!

While it's no surprise now to see Jenkins end up in a Nittany Lion uniform, at one point it seemed like he was going to be yet another top player from the state of Pennsylvania who took his talents elsewhere. Jenkins seemed destined to end up an Ohio State Buckeye, or even a Michigan Wolverine. Then James Franklin got a hold of him.

Jenkins has visited campus six times since last June, with four of those visits occurring within the last three months. The interest had always been there, but it wasn't until Coach Franklin and the new staff took over that the momentum really started to swing in Penn State's direction. It got to the point that Jenkins has essentially been considered to be on "Commit Watch" for at least a month now. Things were looking promising to begin with for the Nittany Lions when Jenkins made it public that he would be with his mother for his Cinco de Mayo visit. However, when he announced that he would be making his college decision today (May 6th), it became crystal clear that the number one player in Pennsylvania would become a Nittany Lion.

The commitment of Jenkins is a big one for the Nittany Lions and Coach Franklin, because without him the state would not be able to be truly dominated. However, Sterling's commitment means plenty more for this team than sending a message to anyone trying to recruit within the Keystone state borders. Jenkins will begin his career at Penn State with an already massive and powerful frame. He will pose an incredibly difficult assignment for any defensive end that lines up across from him, as said defensive end will have their hands full enough with simply trying to fight through his long arms.

Like most members of the 2015 recruiting class, Jenkins could potentially see a redshirt during his first year on campus. That will likely depend on how he continues to progress during his senior year of high school, and how he looks in summer/fall practice next season. Jenkins has all of the physical tools in the world and already knows how to use most of them. Like every other high school offensive lineman out there, he could still use some work refining his blocking techniques, but that is something that will continue to work on with Coach Hand.

In the end, I expect Jenkins to fight for immediate playing time. He has the potential to man the left tackle spot for as long as he is at Penn State. Some time spent adding on to his ideal frame will just make him all the more difficult to deal with as time goes on. He already flashes the ability to completely dominate his defender at the high school level, so the continued growth and experience will be his greatest tools in building consistency.

Jenkins's commitment brings the class to 14.