It's the off season. Time to brush up on our schemes.

When you played high school foosball, your coach could teach secondary coverage in under 5 minutes.  You ran "Cover 3" - three deep defenders.  Two corners, one on each side of the field, started 8 yards off the ball, took 3 back pedal steps as their "read" (diagnosing run or pass), and if they read pass, they were responsible to cover "as deep as the deepest man" in their zone, which stretched from the sideline to the hash.  The free safety aligned 10 - 12 yards deep, used the same three back pedal steps, and stayed "as deep as the deepest man" in his zone, between the two hashes.  Three linebackers and one strong safety covered four short zones, dropping to preset areas 8 - 15 yards deep of the line of scrimmage.

All done.  Three deep, four under, with each of those seven defenders responsible for a zone.  It mattered not whether zero or three receivers entered your zone.  You dropped to your zone, and when the quarterback fired, you broke on the football.  See photo below, courtesy of CougCenter.com, who saved me the effort of drawing it. 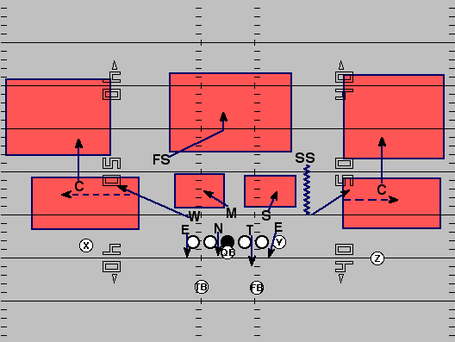 Then Mouse Davis, Mike Leach, Steve Spurrier, Hal Mumme, and others began running 4 receivers onto the field, and sending all four of them deep.  Or, they'd send 3 on go routes straight down the field, with a fourth breaking in on a post, or out on a corner route, or - you get the idea.  Three deep defenders struggle to cover four deep receivers, particularly when your 3 deep must cover "as deep as the deepest man", while a fourth receiver breaks in or out, wide open beneath a teammate continuing long ("the deepest man").  Nick Saban, as quoted by the excellent BrophyFootball blog, put it best:

We got to the point where, this is the reason that we do this, when everybody started going spread we couldn’t play 3 deep zone. This started with the Cleveland Browns, I was the defensive coordinator in the early 90s and Pittsburgh would run 'Seattle' on us , four streaks. Then they would run two streaks and two out routes, what I call ‘pole’ route from 2x2. So we got to where could NOT play 3-deep zone because we rerouted the seams and played zone, and what I call "Country Cover 3" (drop to your spot reroute the seams, break on the ball). Well , when Marino is throwing it, that old break on the ball shit don’t work.

As spread offenses swept the nation, defensive coordinators began to adapt.  The simple chimp answer would be to use straight man coverage, or to run Cover 4 - four deep defenders.  Both of those notions have serious holes, though.  Man coverage, particularly against a mobile quarterback, puts up to five of your defenders with their backs to the ball, assuming you even have that many defenders who can turn their hips and run fast.  That's not cool.  Meanwhile, trotting out 4 deep defenders in a fashion similar to 3 deep leaves you with just 7 defenders to stop the run - historically speaking, that's not a sound principle either.

So the cool kids now use "Quarters" coverage.  Quarters, in theory, allows you the flexibility to keep 4 deep defenders if the offense attempts 4 vertical routes, while simultaneously affording you an 8th man in the box against the run.  Hooray for science.  Let's take a look at how this miracle occurs.

Thanks to two years of Ted Roof and John Butler, we have hours of game film of quarters coverage to profile.  But before you completely sour on this coverage because of those two names, let's toss one more name into the mix: Thomas "Scrap" Bradley.  That's right, friends - Tom Bradley ran Quarters, too, and not just Cover 3.

Quarters, in simple terms, takes 4 defensive backs, and assigns deep ball coverage contingencies to each one, for one-fourth of the field (thus, the "quarters" nomenclature).  But unlike your high school Cover 3, you'll rarely find all four of those dudes staying as deep as the deepest receiver in their zones.

Focusing on the top half of the screen, Astorino and Lynn face two little fast guys, #'s 1 and 2, removed from the line of scrimmage.  There are a bevy of calls that Astorino - in theory at least - can make.  He can make a call that puts himself in deep half coverage, and Lynn in short zone coverage (with run force responsibility); another call can reverse that, with Astorino short and Lynn deep.  And, of course, there are (potentially, at least) a bevy of other calls that he could make.

What doesn't change so much are the reads that Drew and D'Anton need to make.  They are both effectively in some sort of match up zone, and they're both reading the #2 receiver off the snap of the ball.  If #2 goes outside, Astorino (assuming he's short) stays short.  Similarly, if Lynn reads #2 running an out, then he needs to follow #1 deep, and/or track #1 deep/in, and pass him off if he crosses deep zone (because #1 and #2 can not both run short and out (if they do, hooray)).  If #2 goes vertical, then Astorino and Lynn also need to read #1.  If #2 goes deep, but #1 stays short, Astorino stays short, switching to #1.  If both go vertical, then both Astorino and Lynn go vertical as well - this is the counter to 4 verticals, configured by half a field. 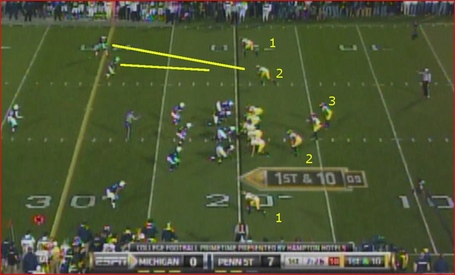 Confused?  Good.  Here's another example of quarters, from 2012 against Nebraska.  The Huskers deploy four eligible receivers to the bottom of the screen, with just one receiver to the top.  Given such an unbalanced formation, the safety to the top of the screen can make a call to put his corner in man coverage, leaving that corner on an island - but freeing himself for weakside run force and cutbacks from strongside, while notionally taking a 'deep half' to his side of the field.

On the bottom half of the screen, the safety, corner, and SAM linebacker all work in concert to the safety's call.  As we described in the Michigan shot above, the safety and corner initially read #2 to their side, keying their responsibilities off of his stem.  The SAM - Mike Mauti, in this instance - has a tough job.  Dude splits the distance between the TE (#3) and slot WR (#2), "walling off" against a quick slant, and preparing to match up - for a bit - against inside breaking routes, before passing the inside breaker to his MIKE.  He also, generally speaking, needs to be in position to chase down a quick hitch or quick out or WR screen to his outside.  Last, if this is a run (and it is on this snap, by the way), he also is your run force on the outside. 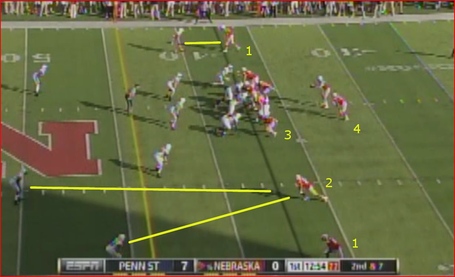 One more shot - this one is from the 2012 season opener versus Ohio.  With the benefit of hindsight, I'm not sure why I added this shot.  The only new, hip, cool thing to point out here, I suppose, is "the pistol" alignment, and the fact that slapping a RB directly behind the QB forces an odd numbering, making it a bit of a pain for making calls.  But when you see "the pistol" in all 12 games from all of your opponents, it's unique flair kinda wears off, and you start to learn the answers to the numbering. 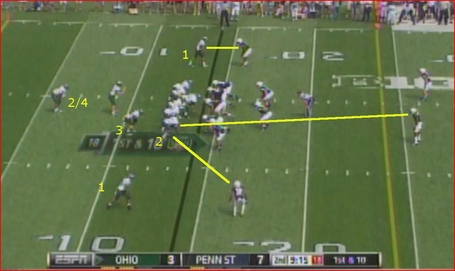 We could spend another 12 hours describing, diagramming, and explaining "Quarters".  That's probably its biggest weakness, by the way.  There are a metric ton of calls a safety could make based on formation - swap, cloud, read, alert, flat, roll, man, and on, and on - each of which is the "perfect" call against a particular offensive formation.  The current defensive wizard of college foosball, Sparty's Pat Narduzzi, claims well over 20 checks to his Quarters coverage - although, he also claims to settle on just five for each individual gameplan so that his defenders can play fast.  That seems smart.

No matter your calls and responsibilities, though, the ultimate end is to afford you an 8th or 9th defender near the line of scrimmage to support the run - which single high, two deep, and three deep all do - while still being able to cover the four deep receivers problem (with which high school two and three deep struggle).  At its apex, "Quarters" is effectively single high, man, man-under 2 deep, Tampa 2, and 3 deep all at once, depending upon the safeties' calls, with the added bonus of having a contingency plan for 4 verticals.  That's why it take 12 hours to describe.

Recruiting, of course, impacts the type of calls a defensive coordinator might put into his gameplan each week.  Scrap, who always had a bevy of white box safeties, ran Quarters that looked an awful lot like Cover 3 - which it effectively was, after the checks had been made.  The Holy Grail for Coaches Franklin, Shoop, and Pry is to find safeties and corners who can jam, and flip their hips, and run, and stuff the run.  If both safeties can run deep as well as they play the run, then Shoop can better disguise coverage.  If he has corners who can get off of blocks and tackle on the edge as well as they turn and run deep, then Shoop can make the QB guess who - the safety or corner or LB - is taking the short zone, who has run force, and who goes deep.  These are advantages equal to having a lockdown man-to-man corner who takes away your best wideout.