As we head into the last throes of the offseason, BSD has decided to get nostalgic, coming up with our favorite Penn State football-related memories. This week, we take a look back at our favorite players and today, Cari profiles Paul Posluszny--the first official crush of BSDivas everywhere.

I know what some of you are thinking. There's a series of posts, and Cari's writing one about a linebacker, and said linebacker's name doesn't start with "Mike" and end with "Mauti"--something's wrong here.

Well, to you, fine BSD reader, I have to argue that if it wasn't for the contributions and general awesomeness that was (and is) Paul Michael Posluszny, we would likely not have celebrated the resurgence of "Linebacker U", and the Penn State program in the latter half of the aughts, and the splendour that was the 2005 Penn State football season.

Poz came to PSU a three-star out of Hopewell, PA; a solid recruit, no doubt, with offers from Iowa, Wisconsin, Northwestern and Pitt, but part of a 2003 recruiting class that wasn't heralded by any means. He was the 19th rated linebacker in a class that included such stalwarts as...Jarvis Jackson and Darius Ingram? This wasn't a very good linebacker class, to be sure, and Poz ended up the cream of the crop, even if the bottom of the top 20 of the class before he got on campus.

He saw time early on, in the fifth game of his freshman year--and was starting by the final game of that 2003 season, logging 36 tackles, 1 interception (returned for a touchdown), and 1 fumble recovery during that inaugural season. His sophomore year built on where he left off; in addition to being 2nd team All-B1G, he was an academic All-B1G player, and led the team in tackles. While the overall record of the team in 2004 could be described at best as less than stellar, the defense was phenomenal and near the top statistically in the nation in most categories--and Poz anchored that defense, which didn't let up more than 21 points all year, despite only winning four games.

Before the 2005 season, many (most?) had written off the Penn State football program, and its players and coaches. That squad turned that misperception around, and brought the program back to prominence. The captains of that memorable, Big Ten championship team? Michael Robinson, Alan Zemaitis--and Paul Posluszny, the first junior captain of a PSU football team since 1968.

There are so many iconic memories of that 2005 season. Jared wrote about one of the best last week, and the Ohio State game (and Tamba Hali making Troy Smith do a headstand); my most enduring memory of that season wasn't one specific moment, but rather this: 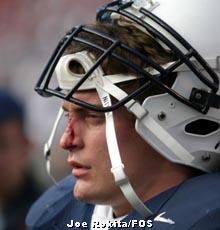 The open cut on Poz's nose that wouldn't heal. The symbol of him, his toughness, his fierceness. The team's toughness and fierceness, and their unwillingess to roll over and fall apart at the end of 2004 when everyone left them for dead--or roll over at Northwestern when the season seemingly held in the balance. Every week, Poz's wound on the bridge of his nose that had healed up post-game the week before would open up again as his facemask crashed into his face on tackle upon tackle, and he seemingly didn't care. He played through the blood and the sweat and the stinging pain, because it was all worth it--the season they had all played their hearts out for, that ended in a #3 ranking and a triple OT Orange Bowl win, was worth it.

Among the accolades Poz garnered that year were the Bednarik Award (nation's best defensive player) and the Butkus Award (nation's best linebacker). He was a first team all-American, and All-Big Ten, and an Academic All-American. He was named Big Ten Defensive Player of the Week for three successive weeks--the first time that had ever happened--and the National Defensive Player of the Week following the win over Minnesota. And he was only a junior.

After rehabbing the PCL/MCL injury that caused him to leave the Orange Bowl early (and I'm still convinced led indirectly to the overtimes), Poz returned for his senior year for much of the same--including being a captain again, the first time since 1969 there was a two-time captain at Penn State. He was the Big Ten and National preseason defensive player of the year, and during that season passed Greg Buttle for then-#1 on the career tackles list at Penn State.

In his senior year, Poz was again an All-American and All-B1G linebacker; some of his other awards (or lackthereof) were somewhat suspect, though. For the second straight year, he won the Bednarik Award--given to the Nation's top overall defensive player--but he lost out the Butkus to AJ Hawk. He also lost out the Big Ten's Defensive Player of the Year honors to LaMarr Woodley of Michigan. In other words, he was the best defender in the nation, but not the best defender in the conference--nor was he the best linebacker in the nation. But I'm not still confused or bitter about this at all.

Since leaving Happy Valley, Poz has had a prolific if not outrageously noteworthy pro career. He was drafted in the second round by the Buffalo Bills, poor guy, and played there for four seasons before going to Jacksonville, where he still plays today; he consistenly is amongst the league's top tacklers, despite his presence on teams that have little to no postseason recognition. He made his first appearance in a pro bowl this past year, alongside former Penn State teammate NaVorro Bowman, in the place of Bowman's current teammate Patrick Willis. It was about darn time for a player to plays hard week in and week out, showing his grit and determination and leading his team in tackles--and who had the most solo tackles in the league last year, and was second in total tackles.

But, as a BSDiva, I'm not biased at all ; I mean, it's not like he helped usher in another nationally-recognized golden age of Linebacker U or anything, closely followed in succession by Dan Connor, Sean Lee, Bowman, Gerald Hodges, and Mauti himself. Without Poz, there likely would be no argument that Penn State is no longer Linebacker U. Because of him?

The Linebacker U tradition continues, and will likely for the forseeable future.