As we head into the last throes of the offseason, BSD has decided to get nostalgic, coming up with our favorite Penn State football-related memories. This week, we take a look back at our favorite players and today, Dan profiles Larry Johnson.

I didn't play football competitively growing up. I was focused on basketball and soccer through up through middle school and by the time high school came, coaches recruited me to play tight end or wide receiver on a team that passed the ball five times in an entire season. Hence, I stuck with basketball all the way through high school and attending camps and conditioning each fall.

But when I was little, say nine or ten during the late nineties and early 2000s, and we played football in my backyard with friends who came over, I took on the form of one of these two guys that I watched every Saturday during the fall: 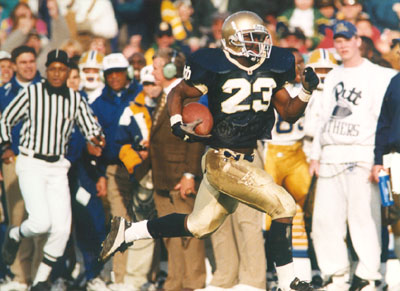 Autry Denson, who is still the all-time leading rusher in Notre Dame history, totaling over 4,300 yards during his four-year career in South Bend, and

Jarious Jackson, the first quarterback that I watched that made me realize that they didn't just throw the football. He held numerous Fighting Irish passing records until pretty boy Brady Quinn came in and ruined them. (NOTE: I was only six when Tommie Frazier had left Nebraska.)

Those two were it for a young Catholic boy who enjoyed backyard football until the fall of 2002 when, on a mid-September night with my parents out to dinner, I slumped down in my living room recliner and flipped on ABC, introducing myself to one Larry Johnson.

He was the purest runner I had ever laid my eyes upon. He was built like a brick house, but moved with the swiftness and ease of a track star. And he wasn't done after Nebraska. He would go onto rush for over 250 yards on four separate occasions in 2012, including a 327-year, four touchdown performance against Indiana. In the final game of the season, a 61-7 beatdown of Michigan State, Johnson ran for 279 yards and four touchdowns.

All of it came in the first half.

Joe Paterno decided that Johnson's services weren't needed in the second half. I don't think there's any question that if he's allowed to play in the final thirty minutes, LaDanian Tomlinson's record of 406 rushing yards in one game is blown completely out of the water. There was no one stopping him that day.

Larry Johnson is my favorite Penn State player because Larry Johnson is the player that introduced me to Penn State football. Up until 2002, my Saturdays began and ended with Notre Dame. By the end of 2002, a year where the Irish went 10-2 in the regular season, mind you, if Penn State and Notre Dame had the same time slot, I'd be watching the Nittany Lions just to see what Johnson would end up doing. And sure, through the rest of the Dark Years and before I realized what career path would lead me to the college I would end up wanting to attend, my allegiances once again had me tuning into NBC on Saturday afternoons, but LJ opened up the door to Penn State football for me, one that wouldn't shut once I realized I wanted a meteorology degree the summer after my sophomore year of high school during the summer of 2005. We all know how that next season went.