I'm answering the questions relatively on time for once!

Welcome to the recruiting mailbag. You ask questions, and I answer them. You know the drill.

Who is next to verbal? -garder54

With the recent 2015 commitment of Irvin Charles, things have again begun to get tight in terms of scholarships available for the Nittany Lions. While it's true that we are not likely to see less than 25 new players sign on come National Signing Day, the Lions already have 18 of those spots filled (verbally, of course). Due to this increasingly apparent roster crunch, it may prompt another 2015 target to pull the trigger soon. Guys like John Reid, Jordan Whitehead, Matthew Burrell, Tim Settle, Christian Wilkins, and a few other big names are all still on the board for the Nittany Lions, but each and every one of them seem primed to wait it out a little longer before making a decision.

So to answer the original question, it could very well end up being 2016 5 star defensive end, Shane Simmons (DeMatha Catholic, MD). Simmons is set to make his announcement on July 30, and Penn State is one of his five finalists along with Florida State, Ohio State, Alabama, and Maryland. Although Florida State is the favorite here, he's said good things about Penn State and I've seen in more than one place that Franklin could pull of the upset here.

The Penn State portion of the internet has taken a very dark turn on Brandon Wimbush in recent weeks. It has long been known that an offer from Stanford would be one that Brandon would think long and hard about, despite verbally pledging to Penn State. The main holdup in that offer being handed out was Wimbush's grades. Apparently they are now acceptable in Stanford's eyes, because Wimbush visited on July 17th, and was offered on the 18th. Wimbush has yet to do anything publicly to indicate he is reconsidering his commitment to the Nittany Lions. We'll have to wait and see here. My gut feeling is that he stays on board. If he thought he was going to eventually earn that Stanford offer and take it, then I doubt he would have committed to Penn State in the first place.

DeBerry is visiting, do we have a shot? -garder54

Early indications are that DeBerry's visit to Penn State went extremely well. It will still a very uphill battle for the Nittany Lions to earn his pledge, but they definitely gave themselves more than a fighting chance by showing him a fantastic visit this past weekend.

I ate at TGI Friday's last night and my digestive system is a wreck right now. Coincidence? -Bill DiFilippo

If you got the all you can eat appetizers for $10, then I would assume that has something to do with it, yes. I suggest you do what you were doing when I briefly lived with you and pull your mattress out to the living room. 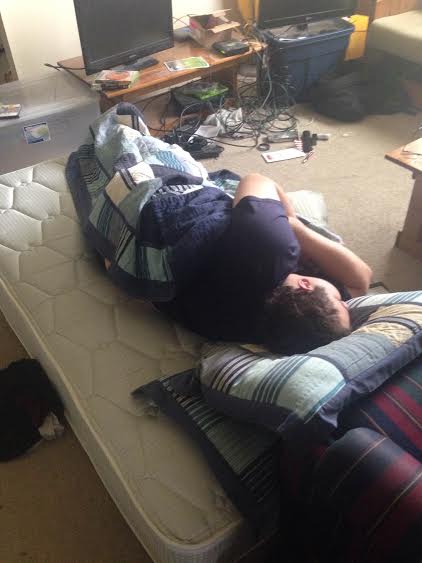 If Wimbush does go to Stanford, are there any QBs lined up to take his spot in the class? -trizani83

There are some names for 2015 that have been floated around, but I think the most likely candidate to replace Wimbush (should he decide to flip to Stanford, which is a gigantic IF right now) is 2016 QB Brandon McIlwain. Yes, he is a 2016 recruit, but he is a 2016 recruit who is planning on enrolling early with the team. McIlwain becomes even more of a Penn State focus than he was previously if Wimbush heads for California.

Do you feel threatened that Cari might be trying to push you out since she hired a new Chris? -PSUfanDuff

Actually, when we were all informed of Nick Page's hiring, my first thought was what will we call him. Then I sadly remembered the monster that is Chris.

So to answer your question, currently unsure. If she hires someone named Nick to work with recruiting, then probably more so. But now that I have achieved editor status, I think that means they like me. So I think I'm safe.

Fun fact, when I was retyping this question for this post, I realized that your name is Tailgate Shogun, and not Shotgun as I had previously been assuming.

At the moment, it does not appear that anyone is planning on enrolling early for the 2015 class. However, as the summer creeps on and we inch closer and closer to the end of August/beginning of September, that means high schoolers are inching closer and closer to meetings with their guidance counselors. There could be one or two who end up deciding to join the Lions early after said meetings. However, I'm not sure at the moment if the numbers from the previous class would allow them to do that.

Could we recruit you a lackey so we don't have to go so long without crootin' updates? -Lucius429

I apologize on this front. I foolishly thought I would have more time to write once the school year ended, but then I remembered that I work 9-4 in the summer, and then coach a baseball team in the evenings. Due to this, I have very little time to do the essential things in life, like eat, sleep, and breathe. My baseball season will be over at the end of this week though, so I should be able to resume posting more regularly.

However, if you are interested in being that recruiting lackey that I would love to have, please feel free to shoot me an email or tweet at me. We may be able to make something happen.

How many recruits does Adam McLean's haircut get us? -skarocksoi

Hopefully one Matthew Burrell, one Shane Simmons, and many other future DMV area recruits.

How much of this are you just completely making up? -skarocksoi

I think PSU offered Neville Gallimore, a Canadian kid who has been flying up every recruiting services board. Do you know if Lynch and O'Connor have been working the phones and twitter to get him to commit? Any word on if he's leaning towards PSU? -Take a wild guess

Penn State doesn't seem to be on Gallimore's radar much just yet. There are other Canadians of interest here to think about for Penn State though. The Nittany Lions stand in extremely favorable position with 2016 DB Patrice Rene (Ontario, CA), and 2017 targets ATH Jonathan Sutherland (Ontario, CA), and DE Luiji Vilain (Ontario, CA). All three visited Penn State this past weekend, and are traveling together from school to school. The reports back from the visit were extremely positive, and some believe the Nittany Lions are sitting on top for all three currently.

As for the angle of whether or not O'Connor and Lynch are recruiting them, I spoke with Rene about this a while back (a little less than one calendar year ago). He told me that Lynch was someone he spoke to from time to time about moving down to America to play football. O'Connor is one I didn't talk to as much, so I'm not sure what kind of contact he has with them. Regardless, I would say Penn State definitely has an advantage over other schools by having those guys available for the recruits to talk to.

If I am currently a Georgia resident but have otherwise always lived in the north, is it reasonable for me to hit on girls in a fake southern accent while using distinctly southern phrases? -dm205

Gotta use everything you got in the arsenal. There's no such thing as unreasonable in the the game of pick-up.

Irvin Charles supposedly visits this weekend. Is he on commit watch? -Salt

Feel free to leave questions for another recruiting mailbag. But I'll probably make a fanpost about it too. So I guess you can leave your criticisms here instead.