As we head into the last throes of the offseason, BSD has decided to get nostalgic, coming up with our favorite Penn State football-related memories. This week, we take a look back at our favorite teams and today Dan looks at Penn State's land-grant rival, Michigan State.

Outside of Penn State, if I had to pick a Big Ten school and football team that I would root for on the national stage, it would be Michigan State. Why?

Because, I don't know, they're just Sparty.

The all-time series between Penn State and Michigan State stands at 14-13-1 in favor of the guys in Blue and White and, at least in the modern era, most of the games are either ultra-competitive or Penn State blowouts. Being on the winning side of those modern intermittent blowouts makes the rivalry that much better. Plus, we actually have something worth fighting for in this rivalry! 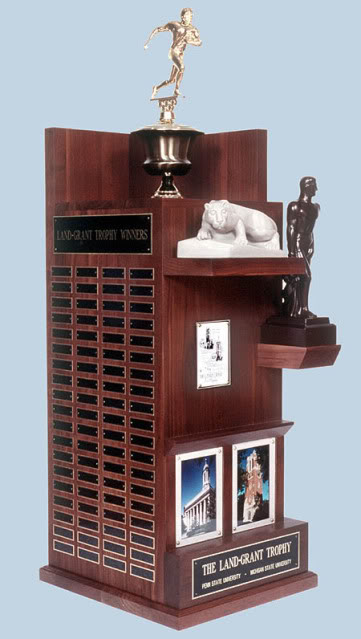 In the last ten years or so, Michigan State has followed a formula that Penn Staters have become accustomed to for maximum success: A great defense, solid running game and a passer that does just enough to get the job done. Pat Narduzzi THA GAWD has transformed the Spartans defense into a national juggernaut and causes other Big Ten fans to pray the Friday night before a game against MSU, hoping that all their offensive players are intact after sixty minutes. The number of runners that have passed through Michigan State, while maybe not impressive at the time, leave an impact on you after you take a look back: T.J. Duckett, Javon Ringer, Le'Veon Bell, (now) Jeremy Langford, etc. And finally, their string of no-name, unheralded quarterbacks, such as Jeff Smoker, Drew Stanton, Kirk Cousins, Andrew Maxwell (OK, maybe not Andrew Maxwell) and now Connor Cook make just enough plays to get the job done, a la a red-headed gunslinger that used to take snaps for Penn State along with other former Nittany Lion quarterbacks.

And is there any team you have a better time rooting for in national Big Ten situations than Michigan State? Take last year, for example. While not a game against a non-conference opponent, Michigan State and Ohio State battled for the Big Ten Championship in Indy. An Ohio State win would have put a Big Ten team in the national title game. The monkey of not being good enough would have finally been off of our conference's backs if the Buckeyes had beaten the staunch defense of the Spartans.

I don't know one Penn State fan who actually rooted for Ohio State even then. And it gave us this.

It should have been Michigan State in the national title game last year and not Auburn. But, they repped the Big Ten banner proudly in a dominant Rose Bowl performance anyway. Sure, we all wait with breathless anticipation for the SPARTY NO!s that have a chance of happening every Saturday in the fall, but I think we all enjoy watching their triumphs a bit more than Michigan or Ohio State.