As we head into the last throes of the offseason, BSD has decided to get nostalgic, coming up with our favorite Penn State football-related memories. This week, we take a look back at our favorite teams and today Cari looks at the Wisconsin Badgers.

For the longest time, I hated the Wisconsin Badgers. I know I wasn’t alone. Their coach was a dick. A fair amount of their fans were insufferable asses (OBrienSchofieldisMyHero, of course, being the obvious exception), both in person and online. 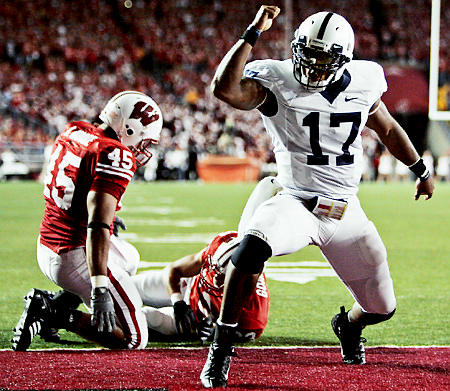 AND NOW I LOVE THEM (2011 omitted of course, because that intention grounding call on Matt McGloin was and remains to this day utter and incredible bullshit).

Why do I love playing Wisconsin? Because they’re historically an okay program, and overall they have an inflated sense of self. I mean, no official national championships, 653 all time wins? That’s good. But it’s no Ohio State or Michigan.

But the way many Wisconsin fans were talking before we went into Camp Randall last year to end the season, it’s like we were the Little Sisters of the Poor and they were doing us a favor by allowing the Nittany Lions to play on their field.

AND THEN THIS HAPPENED.

Of course, I was one of the many who predicted a Penn State loss at Wisconsin last year, but holy hell was I glad to be wrong--and how sweet was that victory? Victory over a program that, though my claims notwithstanding, has been pretty darn good as of late (three straight Rose Bowl births, with a BCS invitation on the line)?

Wisconsin isn’t the flashiest program. They’re not tricky (unless you’re Donovan Smith), and they typically aren’t complex. They play tough, hardnosed, smashmouth football, and they’re solid about it. They play defense, and run the ball down your throat—when they aren’t playing TCU—and as somewhat of a traditionalist, I respect the hell out of that. Ron Dayne was awesome. Russell Wilson proved all the doubters wrong, and won a Super Bowl. And if JJ Watt didn’t get you excited, you aren’t a true lover of defensive football.

I respected Barry Alvarez and what he did for the Badger brand (and because of his respect for Joe). I also respect Gary Andersen a lot, especially for his words after last year’s game, and now that Bret Bielema is in the SEC where he belongs, I can root for the Badgers to win their division more often than not—now that they’re no longer in our division. Once again, this year the Badgers are early favorites to contend for the West division title this year, with Iowa as a surprise sleeper pick, and as Penn State doesn’t play the Badgers again until 2018, I’m comfortable with them doing well.

Until we meet in the title game, of course—then all bets are off, and I have no favorite opponent anymore.