The Amateur Blog Mob packs its bags for the season opener at Croke Park!

Share All sharing options for: Blue/White Roundtable - UCF in Dublin!

It's been a long time, we shouldn't have left you without a dope beat to step to.

When we last left our heroes, Bill O'Brien was on the sideline, Christian Hackenberg was throwing touchdowns, and the Nittany Lions improbably stood victorious in Madison over the Wisconsin Badgers.  Today, much is different, but much remains the same.  Of course, quarterback Christian Hackenberg still stands under center, a year older and a year wiser.  But his best receivers and pass protectors are gone - in their place, talented but unproven players who will look to make a name for themselves this year.  Bill O'Brien is gone, as is the entirety of his staff.  They've joined him in Houston, looking to turn around a Texans team that collapsed during the 2013 season.  In his place is "a Pennsylvania boy with a Penn State heart" - James Franklin has traveled the country like a band on a summer tour.  He's been successful at each stop - the Green Bay Packers, Kansas State, Maryland, and finally Vanderbilt, where he turned a moribund program into a perennial postseason squad.  He's returned home to continue the resurrection of the Beasts of the East.

And so of course, he begins his job not in the friendly confines of Beaver Stadium and State College, Pennsylvania.  No, he takes his team 3,326 miles to Croke Park, in Dublin, Ireland.  That's where the Amateur Blog Mob goes this week as well, where the Nittany Lions embrace the luck of the Irish as they take on the UCF Knights!

You probably remember how this works - each week, I serve up questions to writers and personalities from the Penn State internet community, and they respond.  There was one problem this year, though - the megapower known as Black Shoe Diaries has brought nearly the entire Penn State blog community together under one roof!  So this year, we present the Blue/White Roundtable with familiar faces under one banner -  Tim Tolley (@TimTolley_), formerly of Victory Bell Rings and a host of other sites, Matt de Bear (@PSUMatt2005), formerly of Victory Bell Rings and now in residence at BSD, and Nick "Chris" Polak (@TheREALNPolak), BSD's resident recruiting guru and all-around good guy (probably....ask Bill)!

(1) Welcome back from the dog days of summer. What's the biggest news emanating from Penn State since Blue/White weekend?

Nick: If anything concrete had come out about possible sanction reductions, that would clearly be the answer. Since that has not yet occurred, I have to say recruiting. Since Blue/White weekend, Penn State has picked up eight more recruits for the 2015 class, four of whom were four star recruits, as well as a five star and a four star recruit for the 2016 class. Improved recruiting right out of the gate for a new coaching staff at a big time school is expected, but James Franklin is far outperforming expectations. But the best part is that he's not even done yet. Other highly ranked 2015 recruits still sit on Penn State's board, such as Minkah Fitzpatrick, Ricky DeBerry, Christian Wilkins, Tim Settle, Jordan Whitehead, and more. Franklin and his staff's ability to recruit big time names to the Nittany Lions clearly has stolen the show since Blue/White weekend in my opinion.

Tim: I'd say it's actually been pretty quiet. To me, the story is the new freshmen. A group of big, athletic and fast high school seniors embarked on Central Pa. a month ago and several of them could play key roles in the 2014 season and beyond.

That, plus James Franklin continuing to kill it on the recruiting trail.

Matt: I think the biggest story was the lack of a huge story. Sure, there was some recruiting success, and a couple unfortunate injuries to Ben Kline and Adam Breneman, but for the most part, it was exactly the type of summer you want: quiet. 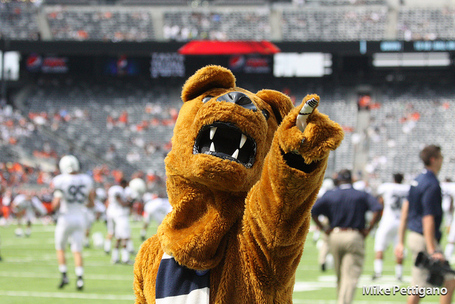 Tim: Irish Whiskey. I feel like any other answer would draw a frown from de Bear. I like my beer dark and heavy but people who claim to enjoy Guiness are just trying to prove something by lying.

Nick: That's tough. Guinness if I'm choosing solely on which would I rather have, but it's hard to imagine a world without Irish car bombs. Therefore I'll say it's a tie between Guinness and Irish whiskey.

(3) New coaches, new objectives. What do we expect to see from John Donovan's offense this year? How different will it be from a Bill O'Brien offense? 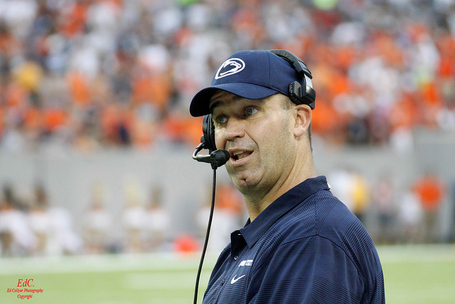 Tim: I expect this year's offense to convert more third downs...which shouldn't be a difficult area to show improvement in. Hack will be more comfortable and confident and the stable of running backs should ease the burden. There's been a lot of talk about the offensive line woes but I'm betting that the experience at Vanderbilt will pay off when dealing with an over-matched O-Line. Expect to see a lot of tight ends and a good amount of play-action short passes until the staff sees what they have up front and out on the edges.

Matt: I expect to see more of a "college" offense. OB ran a very complex offense, especially at the skill positions. Add the depth concerns on the offensive line, and I think you'll see quite a few differences just to try and protect the line (i.e. wildcat). Aside from that, you have the best young QB in the country, and I think there will be plenty of leaning on Hackenberg's right arm.

Nick: The main thing that people talk about when they mention Bill O'Brien is his usage of the tight ends. In that regard, I don't think we'll see much of a change. Sure, we surely won't see the four tight end set that O'Brien got all of our hopes up about, but Kyle Carter, Jesse James, Mike Gesicki, and Bretn Wilkerson will still play a huge part in the offense. Not only are they the deepest group on the field, but they are always great security blankets, which Hackenberg will likely need a lot this season when the pocket breaks down in front of him. Other than that, we will clearly be seeing a more diverse run game than O'Brien's Lions liked to employ. Whether it's having Belton or one of the speedy wide receivers take an end around, or the wildcat, look for Donovan and Franklin to try and confuse the defense with a more, dare I say, SEC style running game.

Nick: 31-24 Penn State. I think Penn State's defense will start slow and let UCF jump out to a 10 point lead in the first half, but they'll buckle down in the second half. A redshirt freshman is still a freshman, and Pete DiNovo is as redshirt freshman as they come. I expect the defensive line to have a big game under the tutelage of Coach Chaos, while Jordan Lucas grabs a pick to seal the deal late in the contest. On offense, Hackenberg throws a lot of screens and quick passes while Belton and Zwinak go to work on the ground. In the middle of the second half, Hackenberg will hit DaeSean Hamilton on a deep play action pass to take a lead that won't be relinquished.

Tim: A year ago, I predicted UCF would win in Happy Valley and the Twitter police laid into me. While being right always feels good, I was forced to drown my sorrows that night like everyone else. This year, the Jameson shots will be accompanied with victory rather than defeat.  Penn State: 27, UCF: 16

Matt: Last year it was bortles who lit up Penn State's secondary. This year, PSU has the star in the making under center, while the Knights break in a young signal caller. Combine that with what appears to be a very good defense, especially on the line and in the secondary, and I think the Lions have the advantage. The inexperience on the offensive line, going up against a very good UCF defensive line, will keep it close, but I like PSU 27-20.