Amid the grunts of off tackle and up the gut power runs was a decidedly un-caveman-like, modern play design.

Penn State ran 45 times for 228 yards and 5 touchdowns Saturday, rolling over UMass with every toss sweep and outside zone run in their playbook.  After the first three contests netted just 57 (vs UCF), 106 (vs Akron), and 64 yards (at Rutgers), it was a welcome sight.  Bill Belton, Zach Zwinak, Akeel Lynch, and Cole Chiappialle all found holes, particularly to the outside.

Amid the grunts and snot-bubblers of the many "38 Power" sweeps, John Donovan mixed in a chain moving "packaged" play, the stick-draw.  Film Room tips its hat to BSDer Salt, who pointed it out post game, and requested a breakdown.  Let's see what the excitement is about.

So just what is a stick-draw packaged play?  It's two plays in one, offering a run-pass option.  The quarterback can choose to hand the football off, or throw it, depending upon how he reads the defense.  What makes it popular with offensive players, offensive coaches, and fans is this: when it is designed and executed well, the defense is, uh, defenseless.  The quarterback's "option" is determined by the defender.  If the defender reacts one way, the QB goes the other.  No matter what the defender does, he'll be doing the wrong thing.  For another 3,000 words on the subject, you should read Chris Brown's Smart Football post here (now part of Grantland).

John Donovan's particular stick-draw packaged play on Saturday included the "stick" (a quick 6 yard pass to the tight end), and the "draw" (a handoff to a running back up the middle behind inside zone blocking).  But it also included the now familiar "smoke" route on the outside - the quick throw to, usually, DaeSean Hamilton or Geno Lewis on the outside, while someone from the slot cuts the corner over the receiver.

In the shot below,  Penn State faces 2nd and 10.  Donovan calls his stick-draw.  Jesse James will run the stick.  Bill Belton will run a draw, while the O-line run blocks inside zone.  To the top of the screen, Mike Gesicki and DeaSean Hamilton will run the smoke route.  The red square highlights QB Christian Hackenberg's read, the UMass outside linebacker over Jesse James (in addition to the split safeties).  If that LB blitzes, James should be open.  If the LB doesn't blitz, and instead runs with James in coverage, then Belton should have a lane to run the draw. 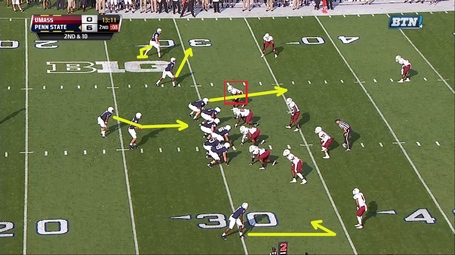 The LB rushes.  The O-line run blocks, which draws the other 3 LBs towards what appears to be a run play.  The safety to the top of the screen sees Hamilton and Gesicki run the smoke route, and he charges up to stop it (he actually rotated pre-snap towards the flat, as part of a shift from Quarters to Cover 3).  All of that leaves Jesse James wide open. 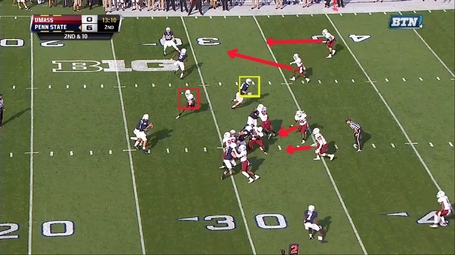 Hack reads the play correctly (he actually read it all pre-snap, including UMass' attempt to disguise its Cover 3 as Quarters - he's smart).  He pulls the ball back from Bill Belton's belly (alliteration win), and delivers the ball on target to James for 15 yards and a fresh set of downs. 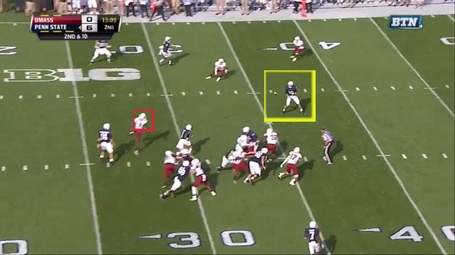 Here is a video of the play.  Notice Hack doesn't bother much with the draw to Belton - he knew he had James pre-snap.

When a play works that well, we tend to see more of it.  Film Room saw it three more times in the 2nd and 3rd quarters - and Penn State ran all three (primary) options available off of it.  So, that's kinda fun.

In the shot below, Penn State faces 1st and Goal to go.  You'll recognize that the formation is flipped - James is now the tight end on the line at the bottom.  Hamilton and Kyle Carter are split wide right, at the bottom of the screen.

But you'll also notice that UMass is not showing the same defense.  Instead of the split safeties from before, we now have a safety lined up over Jesse James, 8 yards deep - right where the stick route is headed.  In addition, we still have the OLB (also with red square) who is our primary read.  If that guy comes (and it looks like he will pre-snap), we don't have anyone to block him, and he'll blow up the draw to Belton.  UMass is showing man coverage. 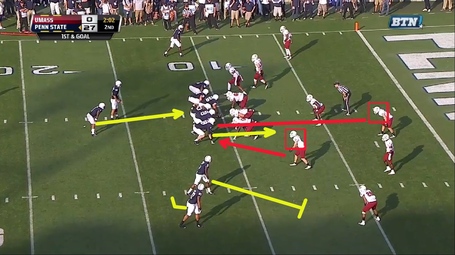 Fortunately, John Donovan planned for just such a contingency.  The stick will be covered (or, at least it will be a very tight window).  The blitzing OLB (actually, there are two of them) will ruin the draw.  So Hack should throw it outside to Kyle Carter on the smoke route.  As you see in the shot below, James is marked, the OLBs both come, but, now, we have Hamilton blocking for Carter, in a 2-on-2 matchup, with lots of green space surrounding Carter. 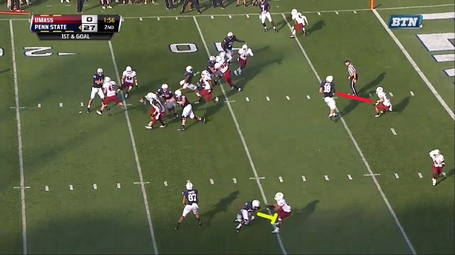 Carter lets this one get through his paws.  But here's your video.

We haven't seen the run from this yet, have we?  Well here you go.  It's 2nd and 10, first drive of the 3rd quarter.  UMass gives Hack another pair of split safeties (though you can't see them in the picture below).  Based on UMass's tricky 34 front, either the OLB or the ILB to James' side could have James in short area coverage.  But, as you might guess from the OLB with red square who is splitting the difference between James and Hamilton at the bottom of the screen, it won't be the OLB with the red square.  No, friends, that OLB is hanging outside to stomp on any slants, or the smoke route.  That leaves only the ILB (with handy red line), who has to carry James in the short area. 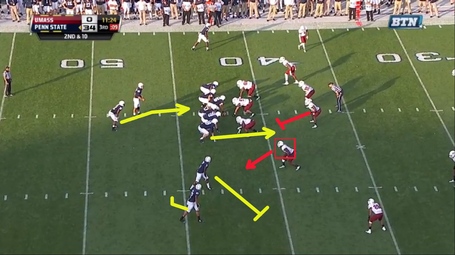 Of course, if those two LBs are concerned with pass coverage responsibilities, then they're not adequately concerned with a run from Akeel Lynch.  And that's to their detriment.  Our QB knows this, pre-snap, which makes him good.

James runs the stick, and gets picked up by the ILB.  Carter and Hamilton run the smoke, which gets jumped by the OLB.  And Hackenberg correctly puts the ball in Lynch's belly, then watches him run for 9 yards against what amounts to just a 5-man tackle box. 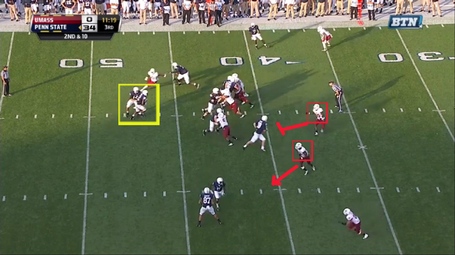 Here's your video.  Watch what happens to that ILB over Jesse James.

And here is one more video.  This one is DJ Crook running the same stick-draw play, on 3rd and goal from the 10 yard line in the 3rd quarter.  Mike Gesicki and Chris Godwin run the smoke route at the bottom of the screen.  Cole Chiappialle runs the draw.  And Brent Wilkerson runs the stick, catching a laser from DJ Crook for that pair's first official Penn State TD.

Bonus video: Penn State's game winner against Rutgers.  You guessed it - another stick-draw.  It's doesn't immediately look like one, because Hack reads the defense and already knows to hand off the draw before Mangiro snaps the ball.  But it's there.  Kyle Carter runs the stick, while Godwin and Hamilton run the smoke to the top right of the screen.  Bill Belton walks into the end zone.  Fun play.

Congrats to the tight ends, particularly Carter and James, who had a whale of a game blocking.  That was the best blocking by our tight ends all season, by a factor of 10 billion (conservative estimate).  Mike Hull's having his best season by a similar factor, as well.

Special teams (we-fense) shout out for Sam Ficken, who buried both 40+ yard attempts, and a ton of kickoffs for touchback.  Grant Haley is a gunner extraordinaire.  And that Pasquariello dude can boom a punt.

The table above describes the run blocking through Hackenberg's series.  The staff have migrated from mostly power, to a 50/50 split between power and zone blocking - as of week 4, at least.

The "packaged" play allows the offense to win, consistently, no matter what the defense does - so long as the quarterback makes the correct read, and the offense executes, of course.  It's as close to a free lunch as exists in football.  You're just about dead certain to get 5 yards off the play.

Often, a new coaching staff will take a season or two to implement "their" schemes.  They'll ignore the roster they inherited, and force a square peg into a round hole using a sledgehammer.  They know their schemes, their process, and they won't deviate from their comfort zone.

Not our staff.  We've seen Bob Shoop adopt the "Under" front, even though he's an "Over" guy.  And now we've seen John Donovan introduce two wrinkles to help his young offensive line: he's incorporated a quick-hitting, chain-moving packaged play, and he's also increased the zone blocking in the run game, even though he's a power guy.

The ability to adapt - their eagerness to adapt - is a trait uncommon among football coaches (just ask MGoBlog).  That our Lions' staff possess it in spades gives Film Room a warm, fuzzy feeling, not just for the future (hash tag recruiting), but for this season, too.  Peel back the rah-rah enthusiasm, and this staff can flat-out coach.