Hack vs The MAC

Hackenberg has had 3 poor-ish statistical games vs teams from the MAC. All three games have ended in Penn State victories, but what's behind Hack's struggles?

Share All sharing options for: Hack vs The MAC

Included in the videos are all of Christian Hackenberg's passing plays vs Kent State in Week 4 of 2013, vs Akron in Week 2 of 2014, and in Week 4 of 2014 vs UMass. Watch and determine what the problem is with Hack yourself.

Stats on the Surface

the boxscore stats for Christian Hackenberg

Adjusted Statistics with Charts and Notes

The stats here vary from the basic box score numbers because not all incompletions are the Quarterback's fault. If a ball is dropped or catchable, in this chart it shows up as a "Hit" or On Target Pass. This is different (and better) than a normal box score, because it shows only the QB's performance reflected. Also shown is where the ball was thrown to, if it was a hit or miss, and where the TDs/INTs took place. With that being said, here are my self-made charts and notes. 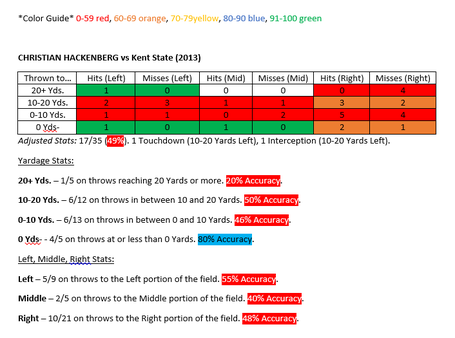 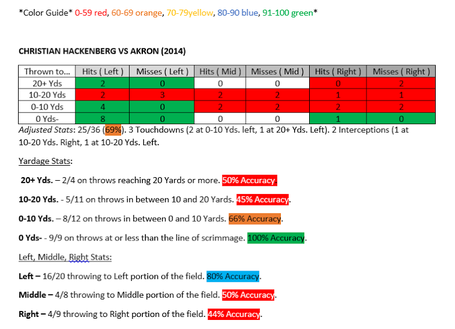 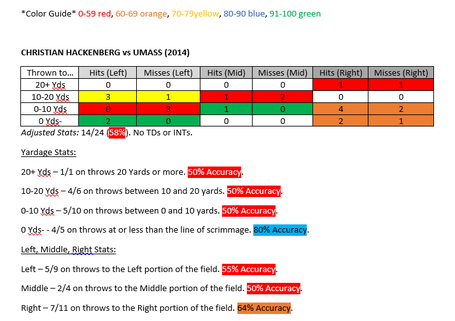 vs ALL MAC Opponents 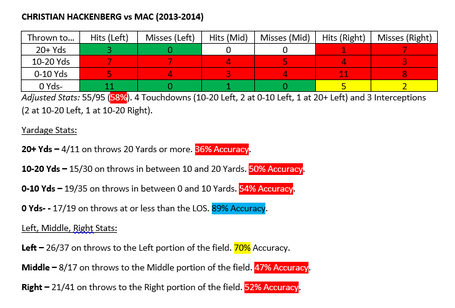 Hackenberg's adjusted accuracy chart performance is 8% higher than his lowly completion percentage, but 58% on target throws is still pretty horrid.

The Past and The Future

This visual presentation of Hack's performances for the conference should represent clearly that he struggled in the game, for the most part. However, pinpointing why is more difficult. Could it be that he is underprepared or unmotivated for these games? I don't think so. I do however believe it is more mental than physical. In these games, I think Hackenberg presses too much, whether that be forcing balls into places he shouldn't or trying to make big plays. The Nittany Lions are expected to win these games, and Hackenberg tries to force it. PSU is still winning these games (easily) with Hack's performances, so he should feel comfortable in his skin in these games. But, like I said, this issue is not due to inability...Christian certainly has the skill to pick apart the Ohio schools and UMass; he just must try to be Christian Hackenberg and not superman.

Hackenberg will at the very least face one more MAC team, Buffalo next year, but he has the opportunity to play another, Kent State, if he chooses to stay for his senior season. These two games are two I'll have my eye on, seeing as how Christian has struggled in the previous 3 MAC games. Hack should continue to get better year-by-year, so I expect the Buffalo, and potentially the 2nd Kent State game, to go much better for him than previous matchups.

If you chose to watch the above videos of Hackenberg's throws and runs, comment below what you think the reason was for his struggles; if you don't think he struggled, also comment below saying why.