Bill Parcells swings by the Film Room to share some football philosophy.

Penn State dropped a winnable game on Saturday, 29-6, to an experienced but struggling Northwestern squad.  For the fourth game in a row, our Lions began slowly.  Sam Ficken had to make the tackle on the opening kickoff.  The defense missed three tackles in allowing a checkdown to the fullback to travel 30 yards in their first series.  The offense dropped a pass, going three-and-out in their first series, and watched the Wildcats return a 40-yard punt 42 yards to boot.

And that was just the beginning.  The hits kept on coming.  After taking possession at the Penn State 31, senior 'Cats QB Trevor Siemian hit a 28-yard go route in the honey hole between true frosh Grant Haley and safety Ryan Keiser.  They scored a TD three snaps later to take a 7-0 lead.

It was a long day.

"We have a lot of work to do.  I couldn't enumerate all of the things I didn't like." --Bill Parcells

Thanks to some nice kick returns Week 2 from Grant Haley, and a beautiful return from Jesse Della Valle on Saturday, Penn State's return teams have broken the Top 100 (out of 128) barrier.  The coverage units. though, are much more plankton than nekton.  Sam Ficken's among the team leaders in tackles on kickoff.

Chris Gulla, when he has time to punt, has been booming them in the 37 - 41 yard range with great hang time, precipitating fair catches.  He's also done a great job with the coffin corner, even if it ruins his net average.  We can win with that.  But something's amiss with the protection.  Despite taking just the standard catch-step-kick, he's had two blocked, and been roughed three other times.  Meaning, everyone is coming after him.  Every opposing coach thinks they can get one (or more) blocked.  Two of those coaches have been right.

"When he's exactly sure what to do, he can do it.  When he's uncertain, he gets tentative." --Bill Parcells

And, of course, there's the offense.  In the 2nd and 3rd quarters Saturday, John Donovan called 4 runs and 43 passes.  With about 5 minutes remaining in the 2nd, through 4 minutes remaining in the 3rd quarter, John called 27 straight passes and 0 runs.  That's 16 minutes of game play spread over nearly an hour of actual real world time, without a single called rushing attempt.  Consequently, today there are 106 teams in Division 1A who rush more frequently than do our Nittany Lions, and 114 who are more productive at it.

"This defense is going to do some dumb things; they're just too inexperienced not to do them.  But we also have some guys who have a chance to make plays." --Bill Parcells

Credit Northwestern for their gameplan.  They attacked all of Penn State's weaknesses.  They won special teams.  They attacked our guards with twists and stunts.  And they took advantage of our outside linebackers' inexperience to attack our safeties and Bob Shoop's quarters coverage.

In the shot below, you'll notice an unusual formation.  They split two WR to the top of the screen - no big deal there.  But you'll notice that we've drawn a yellow seam route over what would ordinarily appear to be a left tackle.  It's not a left tackle, though; it's a tight end, and he's an eligible receiver.  That puts three receivers to the top side.  There are also three to the bottom (though you can only see two of them).  One of them, though, is a big fat offensive tackle.  He'll stand in place on the snap of the ball.

Typical quarters coverage reads the "number 2" receiver to each side.  At the top of the shot below, Jordan Lucas is going to read the slot receiver running a 1-step hitch route, and he's going to sit on that in the flat.  The safety will then take the #1 receiver who runs a deep route.  No one, though, will be running with the tight end disguised as an offensive tackle.  He'll also be running a seam, putting two deep receivers in safety Ryan Keiser's deep half - that's a losing situation for Ryan. 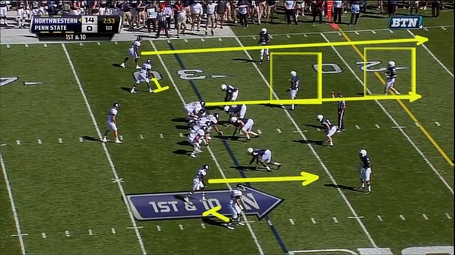 Because of the Cats' funky formation, they're risking blocking our four down linemen (Olaniyan, Johnson, Cothren, and Barnes this play) with just four offensive linemen.  They win that gamble.  They also win as the tight end runs past OLB Brandon Bell without getting touched. 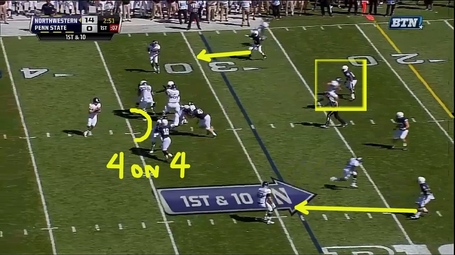 Siemian fires from a clean pocket, taking his pick from two targets down the seam.  Keiser does his best to drive to the ball off the throw, but there's simply too much ground to cover.  The outside receiver, Keiser's responsibility labeled "B" in the shot below, is hugging the end line, while the TE is perfectly on the hash, eight yards clear of LB Bell.  Sideline to hash is 53'4" in Beaver Stadium - too much to cover.  The Cats gain 23 yards off this play, and stole north of 100 during the game. 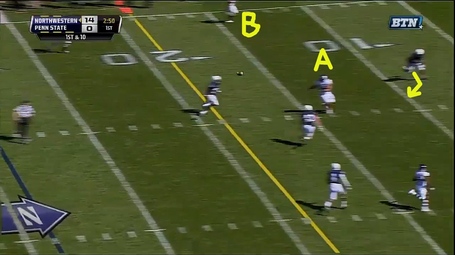 What could a linebacker do to help out his safety in such a situation?  He could "re-route" the receiver.  Coincidentally, Film Room posted a few screen shots of Gerald Hodges "re-routing" Kain Colter in 2012.  See what happens below: 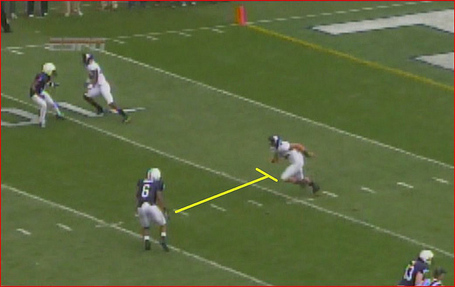 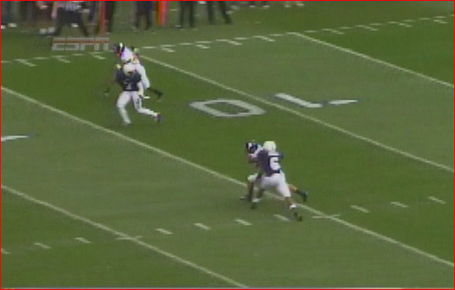 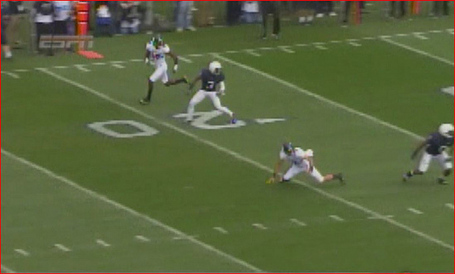 He's not catching a seam route down there.

Recognize the situation, slow the receiver, knock him off the hash, and get a little more depth on your hook zone drop - particularly when there's no one running a route in front of you - and you not only help your safety out, you might just kill the play.  Of course, that takes experience, which is in short supply these days, by NCAA design.

"Don't worry about it.  It's just a bunch of guys with an odd-shaped ball." --Bill Parcells

Sometimes you play like crap, and the harder you fight, the worse it gets.  The effort's still there, as is the fight.  Let's just turn the page on this game and move forward.

**No video or gifs this week due to technical difficulties.  Sorry.