There's no place like home for the Amateur Blog Mob!

Share All sharing options for: Blue/White Roundtable - The Akron Zips

The Nittany Lions have followed the yellow brick road all the way back from the Emerald Isle to the comfortable surroundings of Happy Valley!  That's where the Amateur Blog Mob goes this week as well, where the Nittany Lions open the 2014 home schedule against the Akron Zips!

You probably remember how this works - each week, I serve up questions to writers and personalities from the Penn State internet community, and they respond. There was one problem this year, though - the megapower known as Black Shoe Diaries has brought nearly the entire Penn State blog community together under one roof! So this year, we present the Blue/White Roundtable with familiar faces under one banner - Tim Tolley (@TimTolley_), formerly of Victory Bell Rings and a host of other sites, Matt de Bear (@PSUMatt2005), formerly of Victory Bell Rings and now in residence at BSD, and Nick "Chris" Polak (@TheREALNPolak), BSD's resident recruiting guru and all-around good guy (probably....ask Bill)!

(1)  We've returned from Ireland with an exciting come from behind victory against last year's Fiesta Bowl winner. Was the game everything you expected it to be? What did you think of the atmosphere?

Tim: I didn't really have expectations going into the UCF game. I knew they were returning a lot of starters but also that they'd lost two huge components from last year in Bortles and Storm Johnson and UCF isn't a "reload" kind of program. I was confident but not overly so. Has there ever been a better way to finish games than $am Ficken drilling a field goal?

The stadium was pretty but the atmosphere was hard to judge because by the end of the game I had stabbed every speaker in the basement with my breakfast fork.

Matt: Generally speaking, the played out as I expected, at least in terms of quality of the play, strengths, weaknesses. PSU was clearly the better team, but too many penalties (deserved or not) or other mental errors (turnovers) kept UCF in it and lead to the exciting finish. The atmosphere surprised me a little, to be honest. The crowd was into it, and not just in PSU's favor as I expected.

Nick: Although I was a little bit off with my score prediction, I was quite happy with the game overall, as it confirmed a lot of what we already know. We know we have Hackenberg, we know we have a high powered defensive line, and we know we have talented receivers. We also now can confirm that our offensive line needs work, our depth is lacking, and we need another cornerback. It was comforting to see all of these things prove to be true in that first game, and while I'm obviously concerned about the aforementioned problems, it's nice to know that they seem to be the only problems that will truly affect the games. Sure, it's not helpful that anyone with a brain who watched that game knows those weaknesses as well, but now that the coaching staff has some game film, they should be able to start to find ways around those problems. Oh, and FICKEN.

As for the atmosphere, I honestly didn't notice it much aside from my new favorite sport at halftime, and Kenny Mayne interviewing Irish children. So I guess it was alright.

(2) The Nittany Lions are back in the States this week against the Zips. Will jetlag be a factor? Should we expect a slower than normal start? 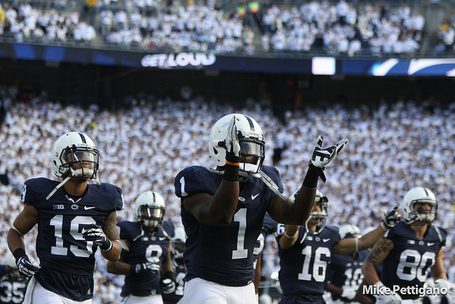 Nick:  I normally think travel is a lame excuse to not be ready to play, but in the case of traveling across an ocean I think it's somewhat legitimate. Still though, I'm sure the coaching staff has the team ready to play and has them in the zone. With the number of people that will be at the game, I'm sure the team will come out energized and forget all about the travel.

Tim: I'll admit, a week ago the timing had me concerned. Penn State flying back from Ireland after facing a stout UCF team while Akron was given 10 days to prepare after slapping an even lesser team than the Zips are used to facing in Howard.

Then I went to the Akron-Howard game and my concerns were lifted. The Zips have a good enough defensive line to give Penn State's front five a challenge but even a slow start won't be enough to cost the Lions in this one.

Matt: I think it's foolish to think the travel won't play a factor. Anyone who has flown across the Atlantic knows it takes some time to adjust. The team got back into Happy Valley early Sunday morning, so I think some of that will be minimized. I expect Franklin and the staff to call a pretty aggressive game to get the team and crowd into it early, Although, the questionable weather forecast may play a part in that too.

(3) The Zips have a very accomplished coaching staff and have been on a good run in their last six games, going back to last season. They have been, however, horrifically inefficient offensively. What kind of challenge does Akron pose to Penn State this weekend?

Matt: Akron lives and dies with the big play. We saw last week that Penn State's secondary had some issues defending the deep ball, and the Zips will certainly try to use that to their advantage. If PSU's D can limit those 20+ yard plays, I think they will be in very good shape.

Nick: Their tempo. Their offense is a quick strike style of attack, and they will probably prey on Trevor Williams/Da'Quan Davis. I think both Williams and Davis have the potential to be more than what they showed last year and in week one, so maybe grabbing an early pick will give them confidence for the rest of the game, but if they start allowing completions early on they may become hesitant. I do expect Akron to start fast and score on the first drive, but I think the Lions will be able to adjust and hold the coverage down long enough for the pass rush to get home. That being said, it will take another great effort from Anthony Zettel, because quick pressure up the middle will go a long way to disrupting the Akron timing routes, and could lead to an easy interception at some point.

Tim: Akron's QB, Kyle Pohl, is accurate and decisive in the short passing game so the corners will have to get in the faces of the Zip receivers. Their run game was non-existent against what should have been an over-matched front seven from Howard. The Zips scored 21 points in a hurry on their 1st three possessions then failed to put up another point before halftime (24+ minutes). Expect to see Shoop leaning on his defensive line to stop the run while moving the linebackers around the field.

Defensively, Akron pitched a shutout against Howard but that was maybe the worst offense I've ever seen. They run a basic 4-3 and Howard never did anything to make them go away from it. 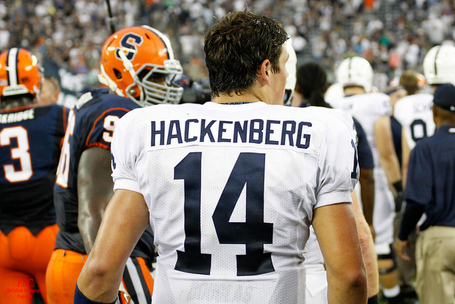 Tim: I've seen the spread around 17-18 and that sounds about right. I imagine the staff will put an emphasis on running the ball and it costing them a few drives but the defense will be stingy enough to make up for it.  PSU: 31, Zips: 13

Matt:  I like Penn State 34-16, or thereabouts. I think it starts out kind of slow and slopopy, with the heavy rain potentially impacting things as well. PSU will ultimately establish themselves along the defensive line, leading to a couple turnovers, a short field or two, and maybe even a defensive TD.

Nick: Penn State 38 Akron 17.  Although Akron is not a bad team, I just have a feeling that Penn State is going to lay it on. With the attendance expected to be high, the energy of the team will be apparent. The offense will feature a heavy dose of Bill Belton and play action deep balls to BaeSean and Geno, one of which will go for a 60+ yard touchdown. Hack will have a nice day, throwing for 320 yards and 2 scores, with another silly interception mixed in. BaeSean will grab 7 passes for 124 yards and a score, Kyle Carter will check in with a TD, and Chris Godwin will have a breakout of sorts with 6 catches for 96 yards.

The defense will come out with its hair on fire, and it won't work right away. The Akron passing attack will have a nice first drive ending in a field goal, and the PSU defense will adjust from there. Mike Hull will pick up a sack to go with 9 tackle. Anthony Zettel will continue blazing his path to stardom with another sack, as well as 2 other for loss. Lucas will grab his first interception cheating on a short slant route, and Grant Haley will house one on the opening kickoff of the second half. Was that specific enough for you?