Tomorrow is the first day of legit practices for the 2016 version of the Penn State wrestling team and hoo boy is it gonna be a great one. After placing 6th at the 2015 national tourney--an uncharacteristically low finish for this coaching staff--Penn State is rested, healthy and fully loaded for a return to being king of the D1 wrestling mountain. 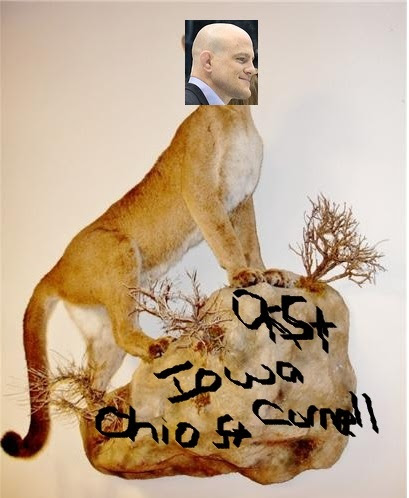 Last year, much later in the preseason, we learned that not only was TRSR Nico Megaludis going to redshirt (it was highly speculated and not surprising), but TRSO Zain Retherford would join him on the sideline. That second one surprised me, probably because I was far more focused on Dan Gable's record 9 straight team titles than Cael Sanderson and Zain Retherford were. While Cael of course was concerned about maximizing his wrestlers' chances to meet their individual goals, the consensus of the punditry was that a fifth consecutive team title was out of the question.

In St. Louis in March, Matt Brown brought home a national title and continued the country's longest active streak of having at least one National Champion (five straight years, since Quentin Wright's first one in 2011), Morgan McIntosh finished third, Jimmy Gulibon and Jimmy Lawson climbed the podium for the first time, as did Jordan Conaway, who filled in well for the absent Megaludis by earning his first All-American honors and finishing 8th at 125.

On the surface, having five AA's and a National Champ looks like a typical recipe for a Penn State 1st-place team finish. But Retherford's replacement Kade Moss, along with injured Dylan Alton's replacement, Luke Frey, and the 717's Garret Hammond, failed to qualify for nationals, scoring zero team points at three weights. Cumulatively, the other seven wrestlers only mustered up a measly 67.5, good enough for only 6th place. Measly and Only being relative terms there, of course, because that is still a fantastic season that fits right in with Penn State's historical average (in the 48 tourneys at which they made the Top-10) of 5.7th place. It wasn't really a Cael Sanderson type of finish though:

It was a fun year -- a learning year. For wrestlers, coaches and fans. We got to watch the development of some inexperienced wrestlers and see some veterans accomplish some new goals, and by the end of the tourney in St. Louis, Penn State still largely overachieved its seeds. But we've got to admit it was a little weird hearing a nearly perpetual champion Cael Sanderson candidly admit that "we always have to believe that we can win, but we also have to have the guys who can score points."

That scoring points thing is not going to a problem this year.

2016 Penn State is stacked and jacked all up and down its lineup. It's got the top-end firepower that helped it win four straight titles before last year and is backed up by a bevy of All-American candidates. It's old and it's young, it is deep with elite talent and it is going to scooooore. A lot.

As the preseason marches on, we'll dig into each weight in depth in separate posts, including analysis of the field, detailed explorations of each of our guy's chances and -- if you play nicely -- predicted finishes. (Spoiler alert: Penn State wrestlers feature heavily in this pundit's predicted finish rankings). (Other thing that happens: I refer to myself as a pundit). But here's a brief early look at what the coaches will be trotting out this year.

125: RSSR Nico Megaludis. You guys remember Nico, right? Made the finals as a true freshman. Did it again the next year. Finished 3rd in his third year. 87 career wins, 20 Major Decision wins, 12 Technical Fall wins. Has scored 51.5 career team points at Nationals. Motor that goes for days? Yeah, he's back. And on a fierce mission.

133: RSSR Jordan Conaway. A weight class victim of Nico's decision to abstain from an available Olympic Redshirt and compete this year, Conaway finds himself back at 133 where he finished Round of 12 in the 2014 tourney, before finishing 8th last year at 125 while Nico sat. We'll see later what a brutal buzzsaw of a weight class this is this year, but Penn State's contribution to its field is only a 5th-year Senior returning All-American. NBD.

141: RSJR Jimmy Gulibon. Weight bumping time! It's been awhile since Penn State has done this in the lower weights, but this coaching staff has a string of successes in doing so in the middle and upper weights. Quentin Wright, Ed Ruth and David Taylor all won national championships the year they bumped up a weight class and Gulibon is next to try to match them. In addition to vacating the tough and deep 133 class, Gulibon enters a 141-pound class that is relatively weak after the eligibility expiration of Logan Stieber, Mitchell Port and Devin Carter. Mat room reports are again whispering that, pound for pound, Gulibon is the strongest wrestler in the Lorenzo Wrestling Complex. In a wide open race that could see any number of title contenders, Penn State here again sends out a stud returning All-American.

149: RSSO Zain Retherford. 2016, 2017 and 2018. Those are the tournaments for which Retherford has remaining eligibility. It feels a little surreal that he's only competed one season so far. His big win over 4x Champ Stieber seems so long ago now. But yeah, we get to watch this dude for three more years now. Although I admittedly wasn't psyched to lose zPain's potential points last year, that's water over the bridge and this year we get to see what the year off did for him. He's definitely bigger, looks just as strong and should contend for the title against perhaps only three or four guys who are likely to even hang with him. Zain's never been a prolific scorer on the level of David Taylor or Ed Ruth (although 15 of his 33 career wins have been bonus point wins), but he also hardly ever loses (two revenge losses to Stieber and a close OT consi loss to Port). He's a hammer who "had a full year to wrestle with Frank Molinaro." Look for big things. Like, Finalist or Champion things.

157: RSFR Jason Nolf. So you say you WOULD like a prolific scorer on the level of David Taylor or Ed Ruth? Jason Nolf is your man. Look for lots of takedowns--dude's a machine. With a gas tank for days and a very Sandersonesque natural tendency to move, move, move. Man, is he gonna be fun. There's undefeated returning champ Isaiah Martinez out in Illinois, a few savvy veteran returners and a couple new incoming studs at the top here, but Nolf is going to fit right up in there. We'll get to see exactly where starting 11/15 in Blacksburg when he takes on returning 4th-place finisher Nick Brascetta. Also, circle Saturday, January 23 for the dual vs. Illinois.

165: This is the only weight where a likely starter is currently unknown to fans. The contenders are RSSO Garett Hammond, RSFR Shakur 'Corey' Rasheed and RSJR Zack Beitz. Hammond has struggled with consistency his whole career (back to high school) and missed qualifying for Nationals last year. Rasheed is a Top-50 2014 recruit who has been injured and has wrestled one college tournament (finished 2nd). Beitz is bumping up from his spot as starter at 149 and hoping to crack the lineup here. No idea what we'll see here and we might not know until the week of the first dual. Nationally, this weight is elite at the top and tough through the middle AA placements, but there's probably also some room for the Nittany Lion who emerges to maybe make a little noise around the back end of the podium at MSG next March.

174: RSFR Bo Nickal. I'm really, really stoked for this weight this year. Nickal got banged up at the Scuffle and got sick just as he was headed into the meat of the freestyle circuit after Nationals, so commonly-shared punditry is estimating him cautiously at this point. I'm not one of those people. Two spoilers from the coming weight-class previews: nationally this weight is actually going to be better than it was last year when it had decorated seniors banging against each other all year. Spoiler two: I've got Nickal reaching the finals in it. Oh, and he's going to be fun to watch. Think Quentin Wright with red white hair.

184: RSSO Matt McCutcheon. This weight can hang with 133 for the title of Most Brutal Weight Class this year, as it returns all 8 All-Americans. Thing is, McCutcheon was thiiiiis close to being one of those All-Americans last year, when he was leading Kenny Courts 3-1 in the Round of 12, before losing on an overtime takedown, 5-4. Earlier in the tourney, he also beat the eventual fourth-place finisher, Blake Stauffer. At this point, I'll guess Mouse will continue to struggle with the Top-2 of Gabe Dean and Nate Brown, but that any of the rest are fair game. I'm certainly excited to watch what he brings this sophomore year.

197: RSSR Morgan McIntosh. I thought Morgan was going to win the whole thing last year. He's extremely talented and strong as an ox. He's been improving his consistency every year, but the past two national tourneys have seen him lose to a lesser-seeded guy who he was quite capable of beating. He'll have an early opportunity to exact revenge on last year's spoiler, Duke's Conner Hartmann, as he accepted an invitation to battle Hartmann at this year's preseason All Star Classic in Atlanta. #Pray4theDukie.

285: RSFR Nick Nevills. He suffered a broken foot early in a Southern Scuffle match vs 2014 All-American Austin Marsden from Oklahoma State and lost badly as he toughed out the finish of the match. It was a real shame, and I can't wait to see the two of them meet up again this year. Marsden is seen as a clear #3 behind returning champ Nick Gwiazdowski and runner-up Adam Coon, but I've got a sneaking suspicion Nevills has the skills to put it to him in a rematch. That won't happen until at least the Southern Scuffle over New Year's, but he'll have a nice challenge right out of the gate when he'll get to face returning 7th-place finisher Ty Walz of Virginia Tech in the early dual in Blacksburg.

Penn State's got a great schedule of tough, tough opponents--in both dual meets and tourneys--and although it won't see Iowa until Big Ten's in March, its wrestlers will have multiple opportunities to prove themselves against very challenging competition.

Here's the thing: they can beat almost every single one. Oklahoma State is fielding an impressive lineup. Iowa may turn out to be better than their second-place 2015 squad. Ohio State, although without World Champion Kyle Snyder who is preparing for the Rio Olympics, has re-loaded and is teeming with talented youth in a balanced lineup. Cornell returns a National Champ and a few finalists and is talking team unity. Michigan and Virginia Tech are fielding balanced lineups with some elite top-end talent and multiple All-Americans.

And Penn State can beat them all. Soundly.

This lineup has prepared for a full year, have of it behind the closed doors of Lorenzo. It's rested, and healthy.