Gonzalez's commitment was one of the first victories for James Franklin over Urban Meyer, and represented a quality addition at a position of need, as well.

Welcome to Black Shoe Diaries' coverage of National Signing Day 2015. We're here to make sure that you know exactly who the newest Nittany Lions are, where they come from, and what we can expect of them. Each of these reports will include their vital information, their high school statistics, highlight tape analysis, outlook for their freshmen seasons and more. We sincerely hope you enjoy getting to know the stars of tomorrow. If you've been reading along with our recruiting coverage all year, we appreciate the support and are glad you hung around with us for the ride that was the 2015 recruiting class. If you are a new reader, welcome! We're glad you're here, and we hope you stick around for 2016!

To navigate your way to other members of the 2015 recruiting class, simply head back to our draft board and click on the player of your choice.

Steven Gonzalez was one of the biggest surprises of the 2015 class. Going into the weekend in which he decided to commit, he was heavily favored by 247Sports Crystal Ball users to end up at Ohio State. James Franklin and the staff were able to captivate him that weekend though, and he never looked back. Gonzalez brings powerful run-blocking potential to go with his incredibly likable personality. He'll be a fan favorite in no time.

The 2015 #PSUSigningDay celebration continues with our 19th pick, @StevenG511! Welcome to the family. pic.twitter.com/DbUJe7gxmR

Since Steven was an offensive lineman in high school, there isn't much to report in terms of statistics. According to MaxPreps, he has been credited with 120 pancake blocks in two years as a varsity starter on the offensive line. He also played defensive tackle for Union City, where he was able to accumulate some impressive numbers, particularly as a senior.

Already sitting at 300 pounds, Gonzalez was a force to be reckoned with in high school. Not many high schoolers have a chance against someone that size, no matter where he's lined up. Regardless, Steven's highlight tape still tells us a good deal about who he is as a player.

First and foremost, is his power as a run blocker. For someone so big, he does a fantastic job of keeping his legs moving. He needs to be careful at the next level to do so while still maintaining his balance, so more experience defensive linemen won't simply disengage and let him run himself out of the play, but that's something that will come with experience. He shows in the tape, that once he latches on to his target, he will not stop fighting and pushing until the whistle blows. This is a skill and a trait that Penn State sorely needs on their offensive line, especially after a season in which holes were rarely opened for the halfbacks.

(Gonzalez is #74 in the following gif)

Although he played all over the line in high school, Steven will likely stick at guard during his time at Penn State. If he can lower his center or gravity and keep his hands just a little bit lower, he should be able to morph into one of the top run blockers in the Big Ten.

Steven also briefly self-assessed his game with me.

"My biggest strength is run blocking and just driving people off the ball and into the ground. I am also good at exploding off the ball quick with a powerful punch. I also can play every position on the offensive line. Also, one important thing is that I play both sides of the ball, so if I need to be used on defense, I can go in and work at it if they need me to."

"My weakness, I would say is my flexibility. I am going to work on that this offseason with my coaches."

Biggest area of improvement in the past year? 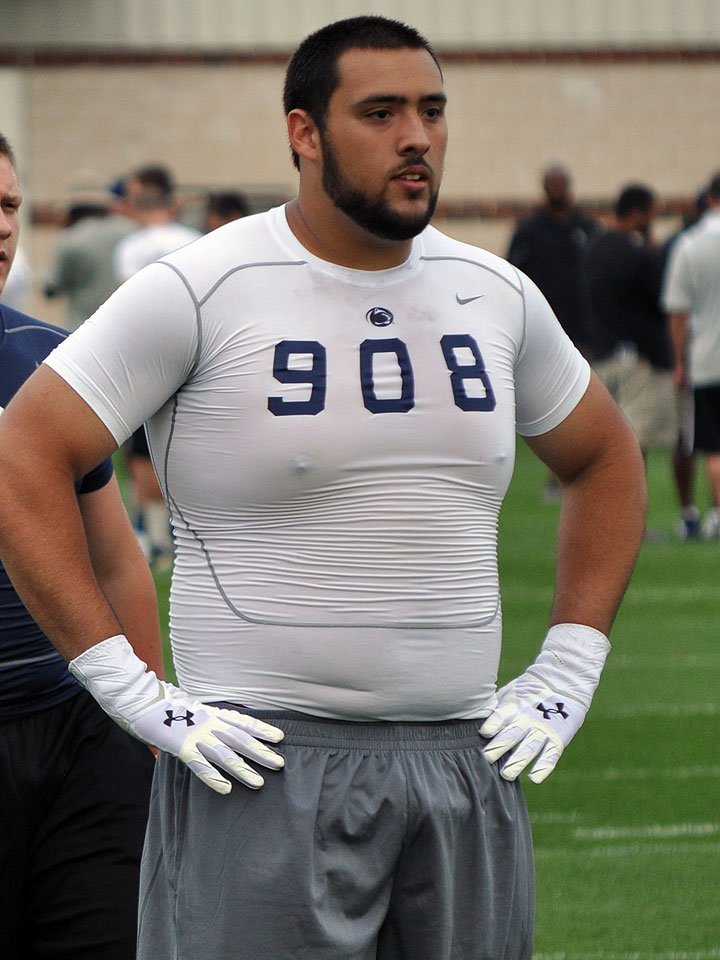 From the day he steps on campus, Gonzalez will look the part of a starting D1 lineman. The only way he should see the field as a freshman, however, should be if the team encounters some key injuries. Offensive line is a position that requires time to get used to at the college level. Nearly everyone who plays D1 football is used to dominating every opposing lineman they faced at the high school level with sheer power alone. The college game takes a far greater understanding of blocking assignments and play design. It's for that reason alone that offensive linemen should always be given redshirts if possible. Gonzalez is no exception to this rule.

He is certainly still a candidate to play early in his career, especially if the Penn State's guard play continues to underwhelm next season. A year devoted to learning the blocking schemes and building more power through the weight room should only improve what looks to be a very bright future for Gonzalez. He will have competition for playing time, to be sure. Between fellow 2015 recruit, Ryan Bates (who will likely end up at guard), and some of the intriguing names the staff is looking at in 2016, Steven will have to earn his spot on the line. The competition should help motivate him even more.