Did Penn State Make a Mistake With Khaleke Hudson?

Did the James Franklin staff make the wrong decision regarding the Pittsburgh athlete?

Share All sharing options for: Did Penn State Make a Mistake With Khaleke Hudson?

Before I go any further, let me say that I don't have a definitive answer to this question. Khaleke Hudson committed to Michigan on Wednesday, choosing the Wolverines over Penn State, Pittsburgh and a few others that were technically in contention, but didn't really seem to be in contention. There has been some talk over whether or not James Franklin and the staff made a misstep in the handling of Hudson's recruitment that ultimately helped push him to Michigan (although, what sounds like it was a lovely visit to Ann Arbor certainly helped, as well). Let's examine two different viewpoints surrounding the Pittsburgh product's recruitment.

Viewpoint A: James Franklin blew it.

Khaleke Hudson was ready and willing to commit to Penn State at multiple points during the summer of 2015. He had made that very clear and obvious, and even seemed primed to announce his commitment during the Lasch Bash weekend. At the time, it appeared as if the coaching staff told him that there wasn't a spot just yet. Hudson wouldn’t forget this, stating that "Michigan made me feel like a priority" after committing to the Wolverines. Penn State pretty clearly chose to make Hudson their 'Plan B', and it didn’t work out in their favor.

As we've talked about repeatedly on this site, though, when you recruit with the big boys, you need to accept that de-commitments and flips are part of the game. In Hudson, Franklin had someone who was as pro-Penn State as they come, and likely would have been as solid of a committed recruit as there is. Knowing that attrition within the 2016 class was likely, it would have behooved Franklin to give a scholarship to someone unlikely to flip, despite the fact that he didn't have a clear cut position. 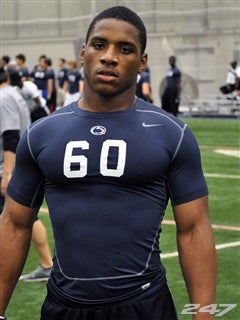 Viewpoint B: James Franklin made the necessary decision.

If we rewind back to the Lasch Bash, when Hudson was reportedly set to commit, Penn State held commitments from roughly 17 recruits, and things were looking good for their pursuits of Tre Nixon, Damar Hamlin, Brendan Ferns, Jordan Fuller, Aaron Hansford and a few others. With an expected class size of 22-23, the Nittany Lions seemed to have their class already set, with space left to pursue their most highly-regarded targets.

If Franklin had chosen to accept a commitment from Hudson at the time, they would have been accepting the fact that they were possibly going to have a class with more players than they had room for. At that point in time, Penn State would have been forced to start preparing for a situation akin to what Michigan is dealing with currently, as far as pulling offers with just a few weeks to go until National Signing Day. Though things didn't end up that way, it's easy to see why Franklin was hesitant to add Hudson to the 2016 recruiting class. Not to mention the fact that Hudson was (and is) still without a natural position. As fine of a football player as Hudson is, the Nittany Lions simply didn't have room to take a pure athlete and figure out his position later, with so many top players left on the board.

What do you think? Is this the first major misstep of the James Franklin era in regards to recruiting at Penn State? Did they lose out on a talented football player when they didn't need to? Or are you pleased that the staff was putting themselves in a position to avoid having to do what Jim Harbaugh and Michigan are currently doing, in pulling offers from previously committed recruits?