ASU’s suspension of the 2x Champ could impact Penn State’s pursuit of its 5th team championship in 5 years, and raises questions about Zahid’s wins over Penn State’s Mark Hall in the 2018 & 2019 finals.

“Zahid Valencia has been suspended indefinitely from the ASU men’s wrestling team. Due to the Family Educational Rights and Privacy Act (FERPA), the University will not be releasing additional information at this time.”

A second outlet, The Arizona Republic, said a source told it that:

“Valenica tested positive for a recreational drug, not a performance enhancing drug.” 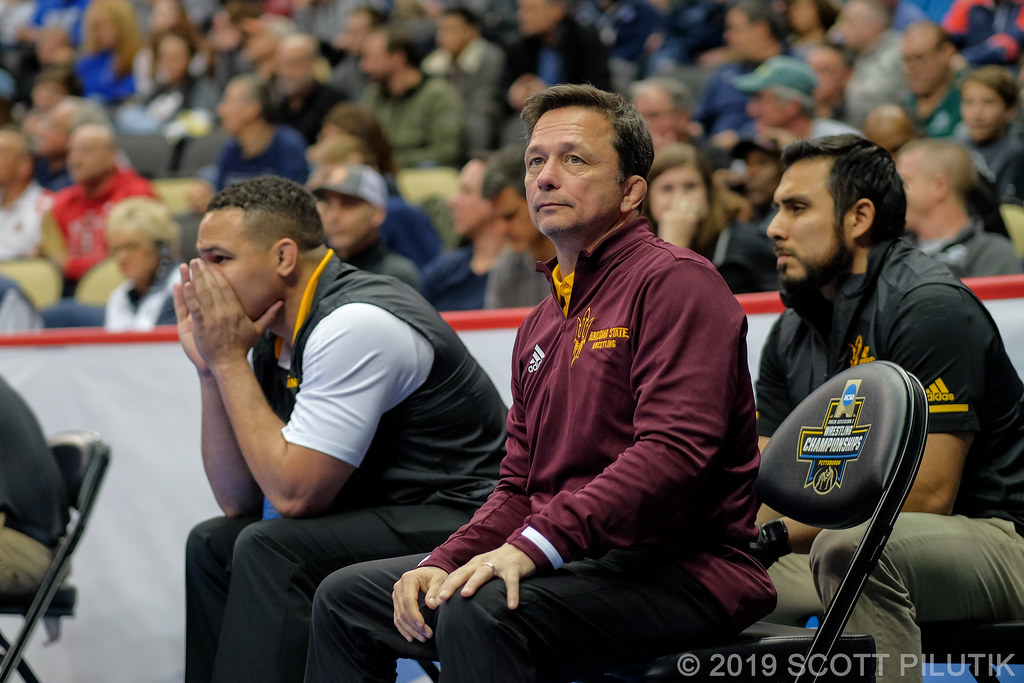 “It’s hard to say what’s going to happen with the lineup moving forward,” ASU head coach Zeke Jones said in a statement. “Our goals remain the same, we want to kick some butt. This is still a really exciting group of guys. That’s why I’m keeping my chin up.”

Zahid has a long history against Penn Staters.

In his RSFR season in 2017, he was undefeated entering the national tournament, earned the 1-seed and faced TRFR 5-seed Mark Hall in the Semifinals. The Penn State coaches had scouted a Zahid tendency to grab headgear, an illegal move, and when it manifested itself during an awarded Zahid takedown, they successfully challenged.

The takedown was overturned. Hall was awarded a penalty point and choice of starting position. He chose down, escaped for another point, and advanced to the Finals via a 4-3 Decision.

The next year, in the 2018 season, both wrestlers ran the table in the regular season and conference tourneys to enter Nationals undefeated. Zahid earned the 1-seed and Hall the 2-seed. They put on an entertaining show in the Finals in Cleveland, with lots of action and great scrambles, and Zahid prevailed, 8-2.

Hall put on a dominating performance in all three positions, including a Takedown in neutral, an escape from bottom, and an fierce full-period top ride and won 4-0.

After the final whistle, he stood amid the raucous home crowd and celebrated by playing air guitar.

Fast forward to Nationals in Pittsburgh, where Hall entered as the 1-seed and Zahid the 3-seed (he’d taken a second loss, to Missouri’s Daniel Lewis, in a dual meet). They again met in the Finals, and Zahid again prevailed, in a tight 4-3 Decision.

Zahid delivered some celebratory payback in the form of mock-smashing Hall’s air guitar.

Ahead of the 2020 season, Zahid finally made the weight-class jump many had been predicting for years: he moved up to 184.

Penn State was scheduled to travel to Tempe in November, to complete the home & home, but its lineup was still in flux. Hall returned for his final year of eligibility and was competing at 174, but Shakur Rasheed was still recovering from offseason knee surgery and hadn’t yet competed at 184. Creighton Edsell competed for PSU in the Navy Dual and in the Black Knight Invitational, traveled with the team to Arizona, and was expected to face Zahid. And, as is a Cael Sanderson custom when preparing a wrestler for insertion into the lineup, Rasheed traveled too.

What happened after that was pretty interesting.

PSU Radio host Jeff Byers reported the failed skin check and indicated that, with Rasheed not yet healthy, PSU would forfeit to Zahid. So those of us in the BSD open thread were prepared.

But those in the arena were not. That may or may not have included the ASU coaches. The Dual Meet Rules of Engagement (unofficial name) were such that at 184, it was ASU’s turn to be the first to send out their wrestler.

According to BSD Wrestle Team member, Frank O’Brien, who was in attendance, Rasheed came out to shake hands with Zahid during warm-ups and, apparently, had weighed in. During Hall’s 174 bout, Frank, whose sightline was the same as Coach Zeke’s, could see Rasheed with headgear on, warming up in the tunnel.

When Coach Zeke sent Zahid out to center mat, Coach Cael approached the ref to share the news that PSU would forfeit.

The bit of gamesmanship had the effect of preventing Coach Zeke from possibly bumping Zahid up to 197 to face Kyle Conel which, in the end didn’t matter, as Conel lost to Kordel Norfleet, 10-4. Such a move happens less in D1 college wrestling than in High School, but the whole affair provided plenty of #content for wrestling fans to discuss.

Despite the ultimate ASU team win, and the end to Penn State’s 60-match dual win streak, it was cool to see the Sparky fans storm the wrestling mat, something I’m not sure we’ve seen in this wonderful, brutal, still-growing sport.

After that November Dual, reports emerged that Greyshirt Freshman Aaron Brooks had challenged & beaten a recovering Rasheed in a wrestle-off, and the following week Brooks competed for PSU at Lehigh, and postponed his NCAA Redshirt for possible use in some future year.

Which set the table for a matchup of Brooks & Zahid in the Freestyle U.S. Senior Nationals. Both are age-group World Medalists and each has a ton of experience on the international stage. Back home in Texas, they met up in the 86kg Semifinals, with Zahid winning a 6-0 Decision, on 1 takedown and 4 single-point pushouts or passivity points. Things got a little scrappy toward the end, with heavy clubs being dished out and plenty of chirping. Here’s Zahid’s recap.

I guess we won’t see now.

Which is a real shame.