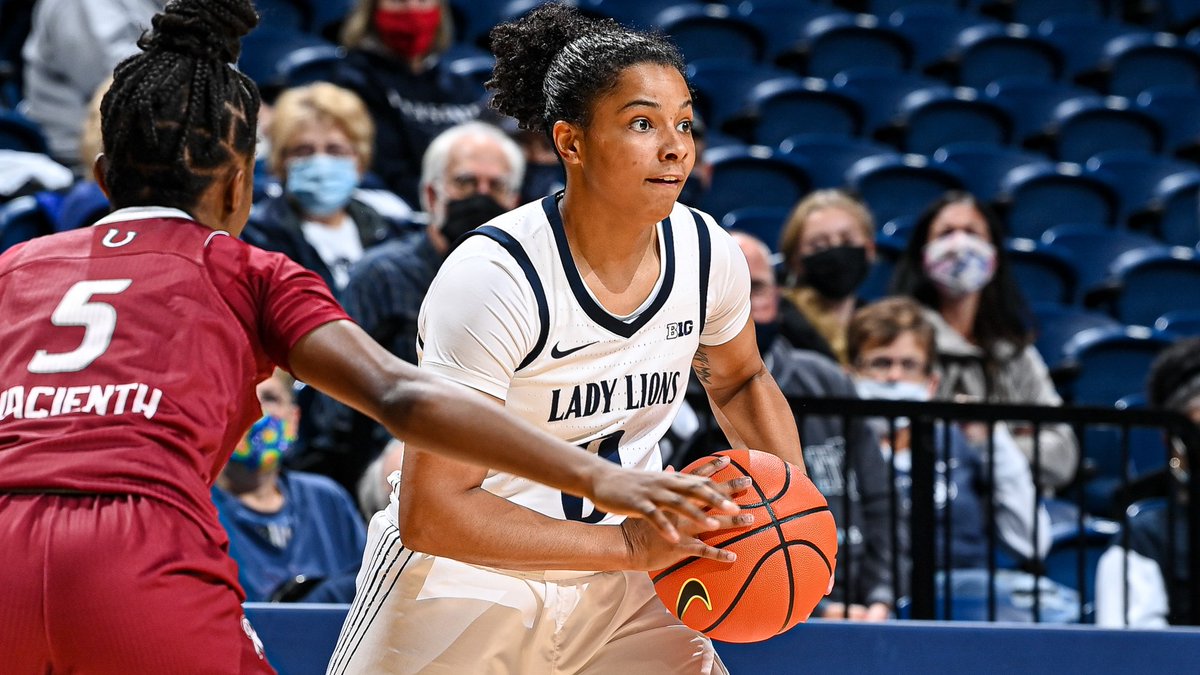 The Penn State Lady Lions (4-4 | 0-0) were once again outrebounded, this time by Boston College (6-1 | 0-0), for a final score of 86-69. The Eagles strategy: A full court defense and attacking the glass on every offensive possession led to a comfortable win midway through the 3rd quarter.

Both teams did well on forcing their opponent to turn the ball over with PSU nabbing 11 steals and 17 turnovers. Unfortunately, Boston College did even better and grabbed 12 steals and forced 21 turnovers. BC would win at the free throw line as well with 14 pts compared to 4 for the Lions. All of this, combined with a 43-33 rebounding advantage would make the close scoring percentages moot point.

This was the 8th game for the Lady Lions in the 2021-22 season and the the 62nd game in the Carolyn Kieger era. Now the Lions will take on #6 Indiana in Bloomington to start off Big Ten play. The next home game for our Penn State team will be Dec. 9th with the Lions will take on Rutgers. Tickets for the Rutgers bout can be purchased HERE.

The Eagles would nab the first score of the game within seconds of the tip to take a 2-0 lead. Boston College would hold Penn State to no scores until 6:43 in the quarter when Tova Sabel got PSU on the board down 4-2. The Eagles would capitalize on several unforced Penn State turnovers and would keep one step ahead of the Lions until finally with 3:00 remaining in the quarter Shay Hagan knocked in a three pointer to tie the game 12-12. Boston College wouldn't let the score get any closer in the quarter, however, as they outscored Penn State 8-2 in the final three minutes forcing seven turnovers.

The Eagles continued their scoring spree into Q2 pushing their lead to 22-14 early with 9:34 left. Ali Brigham and Makenna Marisa would give Boston College fits at the basket at this point and pulled the Lions back to 24-19 after a 2-and-1 completion by Marisa with 8:43 left. Marisa would be forced to the bench after collecting her 2nd foul early in the quarter unfortunately which allowed the Eagles to push their lead to nine 30-23. After the Media time out with 4:12 to go the Lions would be down 32-23 against Boston College thanks to a 7-4 Eagles' steal ratio and a 5-1 FT score ratio. Maddie Burke would help the Lions out of the time out close the Boston College lead to just 32-26 with a three-pointer and after some good defense Marisa ran down the floor and calmly banked in a layup. Suddenly with 2:10 left in the game PSU was back within four just down 32-28. Leilani Kapinus continued the Penn State 7-0 run to cut the lead to 32-30 with 1;52 in the quarter. The Eagles would end the spurt for a moment but Ali Brigham would score another layup to keep PSU within two down 34-32 with :47 left. Boston College sank a three with :28 remaining to make the halftime score 37-32. Overall, Q2 ended up to be a decent period for the Lions, taking it 18-17. The reason why PSU did better was clear, instead of seven turnovers the Lions only committed three which combined with less fouls left Boston College with less options to score. This led to a Penn State FG advantage of 50%-35% in Q2.

The 3rd Quarter began with both teams trading 3-pointers with the Boston College lead at 40-35. Officials called two questionable calls in a row against PSU, one on defense and one on offense early in the 2nd half to allow the Eagles' lead to swell to 44-35. Finally, the Lions managed to force a steal and get a two and one opportunity for Makenna Marisa to give her ten points with 7:44 left in the quarter. Boston College would nab a transition three with 6:42 left in the half to allow their lead to again reach nine at 47-38. A foul called on Maddie Burke and a free throw being made gave the Eagles a 48-38 lead with 5:59 in the quarter off of their 12th offensive rebound in the game. Although the home team managed to take their largest lead of the game of 12 briefly, Tova Sabel would quickly knock in a shot from behind the arc to get the game back to single digits 50-41 before the media timeout at 4:48. Boston College answered with a 4-point play to push their lead to 54-41 with 4:05 left. The Eagles then forced PSU into several tough shots and the lead swelled again this time to 60-43 with 1:34 in the quarter. Boston College would close out the 3rd Quarter with a 66-48 lead after a buzzer beating three to answer Kelly Jekot's shot giving PSU an enormous hole to come back from. The big reason the Eagles were leading were second chance points where they led the Lions 12-2 and by forcing PSU into 16 turnovers, although they had committed 13 themselves.

The fourth quarter began with more of the same turnovers and fouls on Penn State with the Eagles ballooning their lead 73-50 with 8:23 left and going on a 7-0 run. The Lions would finally get two baskets in a row and cut the Boston College lead to 73-54 with 7:15 on the clock. PSU would do it again with Leilani Kapinus 4:53 in the game to cut the BC lead to 75-58. Coach Kieger would call PSU's first time out of the game with 3:36 left in the game once BC got past the Lions again in the paint to lead 79-60. Penn State came out of the time out with a new energy collecting two layups and a steal to get the Lions to down 79-64 with 3:00 left. The Lions would shoot their 3rd and 4th free throws of the game with 1:32 left in the game (talk about favorable calls for BC) to keep the game within 15 points 81-66. This would be the closest the Lions would get with the final score ending up being 86-69.