Penn State continues to look for the man worthy of their last 2013 scholarship.

Share All sharing options for: Men's Basketball Recruiting Big Board 9.27.12

Hoops recruiting season is still going strong as more and more prospects make their college decisions. Things have calmed a bit for Penn State after SF Payton Banks' commitment a few weeks ago, but the #doworkPat team has been working feverishly to find their guy for the last available scholarship for the 2013 class.

Banks' commitment has made things more interesting in regards to the last available scholarship. Top-100 prospect Josh Hart out of Washington DC is still on the board, and Penn State has managed to survive to his final few schools. Chambers and his staff have been on the DC product since Pat essentially was hired last summer. However, a need for a true point guard seems imminent, as Tim Frazier graduates and only combo guards DJ Newbill and Geno Thorpe have reported PG capabilities on the 2013 roster. Check the current matrix below. 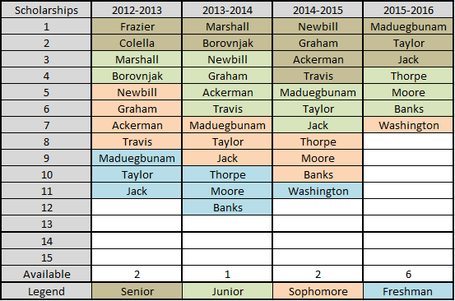 Hart isn't someone PSU will say no to, but they haven't exactly been waiting around, either. Their efforts have increased for other prospects, all of them point guards. Besides, Hart seems ready to pop within the next week or so, and it doesn't seem like PSU is in the best position. If I had to guess, I'd bet Hart goes elsewhere and PSU ends up with a point guard to round out a class that already includes Banks, Thorpe, and Julian Moore.

Other than Hart, PSU has been recruiting DJ Bowles the longest, even before he committed to and decommitted from Central Florida. However, he hasn't visited campus yet, so it's hard to gauge where exactly PSU fits into his list. Woodward had a very strong July with Minnesota Pump N Run and is continuing to see those benefits as he's accumulated close to twenty offers. Not bad for a PG who has been consistently criticized often for his small size. PSU offered within the last week and consequently, he is taking an official visit to University Park this weekend. Smith also had a strong summer and PSU followed up with an offer this month as well, but it doesn't seem like they have much of chance to get in the game for his services.

Stay tuned for how it will all shake out over the next month or so until the Fall signing period which begins November 14th. Also look for some updates on PSU's efforts with underclassmen as they try to get a jump on future classes. #DoWorkPat